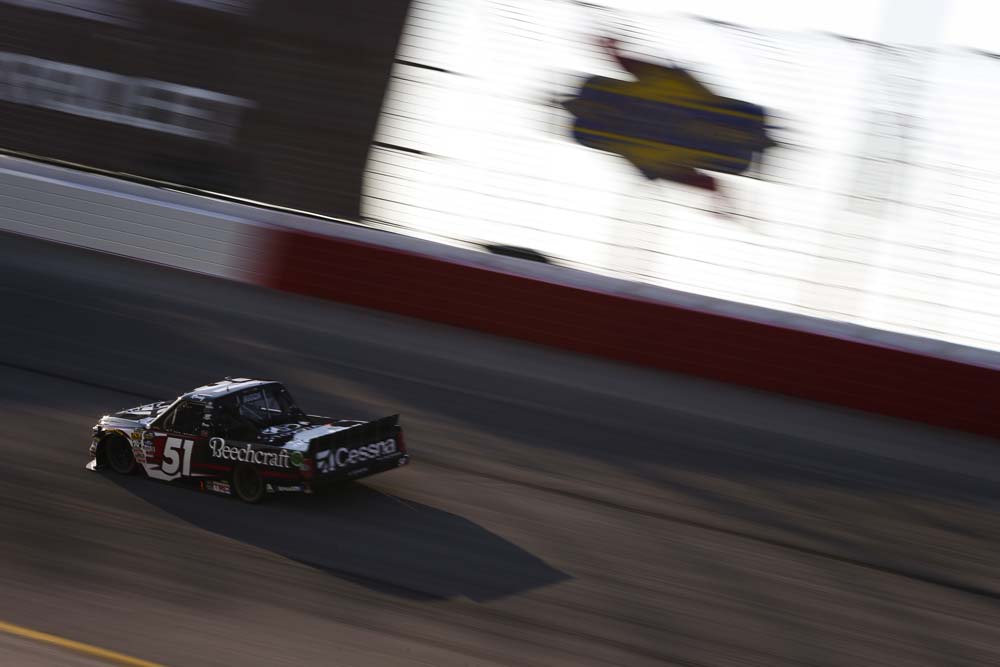 • Kyle Busch will make his first NCWTS start of the season at Atlanta in the No. 4 Cessna Tundra. He will also be behind the wheel of the No. 4 at Kansas Speedway in Kansas City, as well as the No. 51 at Las Vegas (Nev.) Motor Speedway, Charlotte (N.C.) Motor Speedway and Pocono (Pa.) Raceway. All of Busch’s races will be sponsored by Textron Aviation with the Cessna and Beechcraft brands.

• Of the 71 starts Busch has made in his own KBM Tundras, this will be the first time he has driven the No. 4. This number has won two driver’s and owner’s championships, but not with Busch behind the wheel. He also has yet to win at Atlanta driving his own KBM Tundra. His four previous wins were all in trucks owned by Billy Ballew. His best finish at Atlanta in a KBM Tundra is second (2010 and 2012).

• Todd Gilliland will compete full time and contend for Sunoco Rookie of the Year in the No. 4 Tundra once he turns 18 on May 15. Gilliland will miss four races early in the season before his 18th birthday, but has some pretty talented drivers filling in for him, including his father, David, who won the pole and led 30 laps at Daytona, driver-owner Kyle Busch (Atlanta and Kansas) and Spencer Davis (Las Vegas).

• Textron Aviation Inc. is the leading general aviation authority and home to the Beechcraft, Cessna and Hawker brands, which account for more than half of all general aviation aircraft flying. For more than 90 years, the Textron Aviation brands have represented unrivaled innovation, performance and leadership in the industry, offering an unmatched value proposition rooted in the total ownership experience. Leveraging unparalleled speed-to-market, Textron Aviation provides the most versatile and comprehensive business and general aviation product portfolio in the world through five principal lines of business: business jets, general aviation and special mission turboprop aircraft, high performance piston aircraft, military trainer and defense aircraft and a complete global customer service organization. Textron Aviation has delivered more than 250,000 aircraft in over 143 countries. Its broad range of products include such best-selling aircraft as Citation business jets, King Air and Caravan turboprops and T-6 military trainer aircraft, all of which are backed by the industry’s most capable global service network. For more information, visit www.txtav.com.

Of your four wins at Atlanta, none of them have been for your own team. How much would it mean to win there in a KBM Tundra?

“Last year was the first time a KBM Tundra won at Atlanta when Christopher Bell won all three stages and the race. Atlanta was the last track on our list where we hadn’t won a truck race and we finally got to check that one off in 2017. It is really cool for our organization to have a win at every track on the schedule — especially considering we haven’t been around that long.

“My first Legends car back at the bullring was the No. 4, so it’ll bring back a lot of memories racing the No. 4 Cessna Tundra this weekend. It’s hard to believe this will be the first time I’ve driven the No. 4 at KBM, considering the history it has with our organization. I’ve won truck races at KBM with 18, 46 and 51 on the door and I’m hoping to be able to add the No. 4 to that list by getting a win with Marcus Richmond (crew chief) and his team Saturday at Atlanta.”

Kyle Busch’s No. 4 Cessna Tundra:
KBM-045: The No. 4 Cessna team will race KBM-045, for Saturday’s Active Pest Control 200 at Atlanta Motor Speedway. Busch won with this Tundra at Charlotte in May and finished sixth at Kentucky in 2017. Noah Gragson raced it at Michigan (seventh) and Texas in November (10th)

KBM Notes of Interest
• After Daytona, the No. 4 team has one pole with David Gilliland and is ranked sixth in the owner’s championship standings.
• KBM holds the NCWTS records for most career wins (65) and most wins in a single season (14 in 2014). In addition to collecting a series-record six Owner’s Championships, the organization has produced two championship-winning drivers; Erik Jones (2015) and Christopher Bell (2017).
• KBM drivers have collected one win, five top-five and six top-10 finishes resulting in an average finish of 14.1 across 14 starts at Atlanta
• With Christopher Bell’s victory at Atlanta in 2017, KBM completed the task of having at least one win at all 21 active tracks on the NCWTS schedule