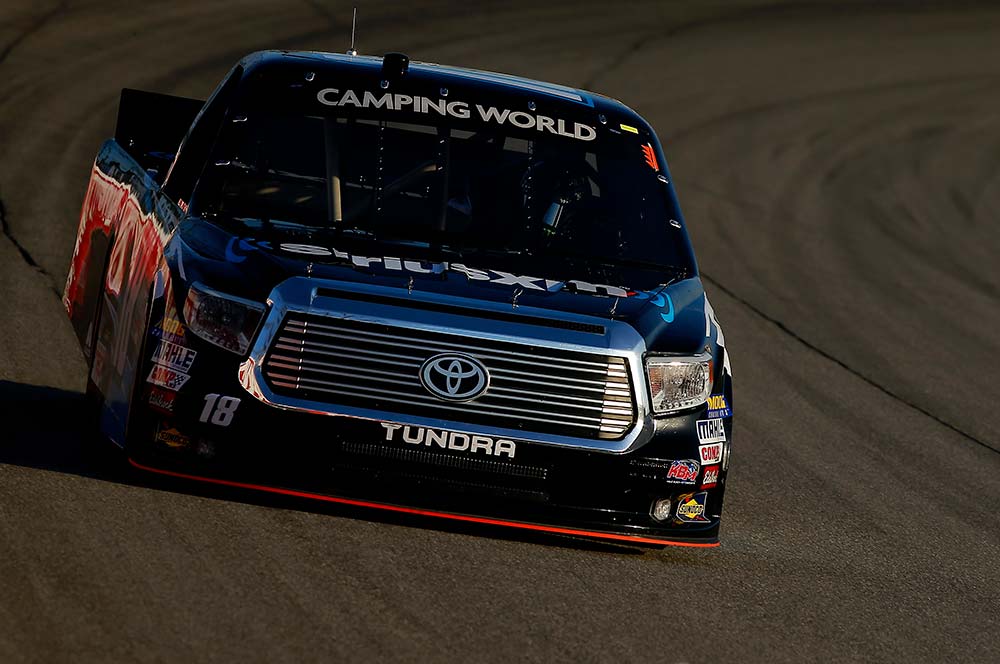 MOORESVILLE, N.C. (Feb. 28, 2017) – Kyle Busch will take the green flag for his first 2017 NASCAR Camping World Truck Series (NCWTS) start of the season Saturday afternoon at Atlanta (Ga.) Motor Speedway behind the wheel of the No. 51 Cessna Toyota Tundra in the Active Pest Control 200. The 1.5-mile oval in Hampton, Ga., is the only track on the NCWTS circuit where KBM has yet to visit Victory Lane and Busch hopes to lend a hand in changing that this weekend. His teammates Christopher Bell and Noah Gragson will also be challenging for the first KBM win at Atlanta.

Later in the season Busch can be seen racing for KBM in the NCWTS on May 12 at Kansas Speedway in Kansas City, May 20 at Charlotte (N.C.) Motor Speedway, July 29 at Pocono (Pa.) Raceway and Aug. 12 at Michigan International Speedway in Brooklyn.

The Las Vegas native is no stranger to Victory Lane at Atlanta. He has recorded four wins in eight starts at the 1.5-mile track and has yet to finish outside the top 10. Busch has a busy schedule in Atlanta as he attempts to sweep all three NASCAR series races in one weekend. Before he climbs behind the wheel of the No. 51 Cessna Toyota Tundra Saturday, he will compete in the NASCAR XFINITY Series Rinnai 250. Busch made history in 2009 becoming the first NASCAR driver to win two NASCAR national touring series races in the same day (Auto Club Speedway) and he hopes to repeat history on Saturday. Then in August of 2010, made history again when he won the NCWTS, NASCAR XFINITY Series and NASCAR Monster Energy Cup Series races at Bristol Motor Speedway, becoming the only driver to sweep all three of NASCAR’s top three series at one track on the same weekend.

Busch is excited to sport the colors of a new sponsor on the hood of the No. 51 Toyota Tundra. Textron Aviation Inc., is the leading general aviation authority and home to the Beechcraft, Cessna and Hawker brands, which account for more than half of all general aviation aircraft flying. The Textron Aviation companies include Cessna Aircraft Company and Beechcraft Corporation, bringing together decades of unmatched experience in designing, building and supporting airplanes. When the checkered flag waves Saturday afternoon, Busch hopes to bring his No. 51 Cessna Toyota Tundra to Victory Lane.

Are you looking forward to your first Truck Series start of 2017?
“I’m excited about getting behind the wheel of the Cessna Tundra for the first time Saturday and competing in both races of the doubleheader with the XFINITY Series. Bono (Kevin Manion, crew chief) and the 51 team brought a really fast Tundra to Atlanta last year with Daniel Suarez and overall KBM had three really fast trucks — we just didn’t have anything to show for it at the end. Atlanta is the only track on the Truck Series schedule that KBM hasn’t won a race at yet, so when we were putting together the schedule for the 51 truck I made sure that my name was slotted in for this one. It would be really cool for our organization to have a win at every track on the schedule — especially considering we haven’t been around that long. Hopefully we can cross Atlanta off the list on Saturday and start our new partnership with Textron Aviation and the Cessna, Hawker and Beechcraft brands with a trip to victory lane.”

This weekend Kyle Busch is behind the wheel, what are your thoughts about the race?
“I’m really looking forward to having Kyle in the truck this weekend in Atlanta. Atlanta is a very fast mile-and-a-half speedway with a lot of character. The No. 51 team has worked extremely hard to get this Cessna Toyota Tundra ready and I think we will have a great race. It’s exciting for the fans to be able to watch Kyle in two races in the same day, and hopefully we will find ourselves in Victory Lane Saturday afternoon.”

Manion has no wins in only one start as a NCWTS crew chief at Atlanta, but earned one top-10 finish in the XFINITY Series and two top-10 finishes in the Monster Energy NASCAR Cup Series, all with Martin Truex Jr.