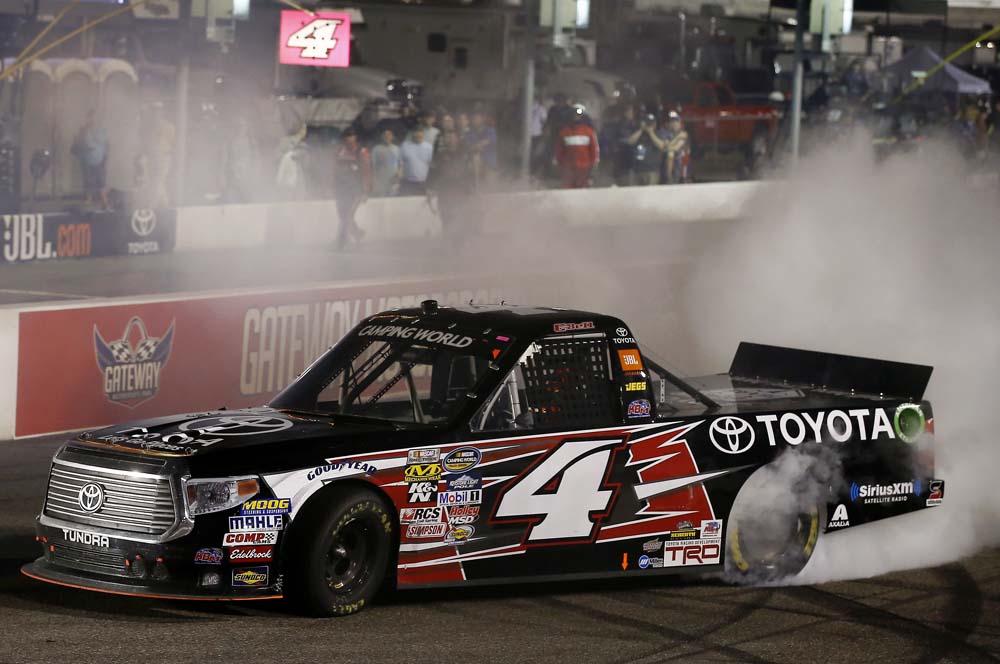 A fisticuffs between two competitors late in the Drivin’ for Linemen 200 at Gateway Motorsports Park in Madison, Ill., will make plenty of headlines, but at the end of the night it was Christopher Bell who delivered the knockout punch and earned his second NASCAR Camping World Truck Series victory. Bell, who led twice for a total of 38 laps, cleared fellow Sunoco Rookie of the Year contender Ben Rhodes through Turns 1 and 2 after a lap-158 restart and remained out front for the final two laps to secure Kyle Busch Motorsports’ (KBM) its 50th Truck Series win. With the victory, KBM moves into a tie with Roush Fenway Racing for most all-time wins in NASCAR’s third division.

“This is just a dream come true,” Bell said of his first NASCAR National Series win on pavement. “Eldora came fairly quick in my NASCAR deal, but this one — it was a long time coming. Man, these guys work so hard week in and week out and they give me awesome race trucks and it’s just nice to be able to give these guys what they deserve. I mean, I just can’t thank everyone enough over there on this No. 4 team. It’s a dream to be here and I’m just really thankful for that. I wouldn’t be here without Toyota, TRD, JBL, KBM (Kyle Busch Motorsports), Kyle (Busch, team owner), Samantha (Busch), everyone, my crew chief Jerry (Baxter), everyone who believes in me. I’ve made a lot of mistakes and I’ve used up my fair share of mulligans, so I’m glad to be here.” 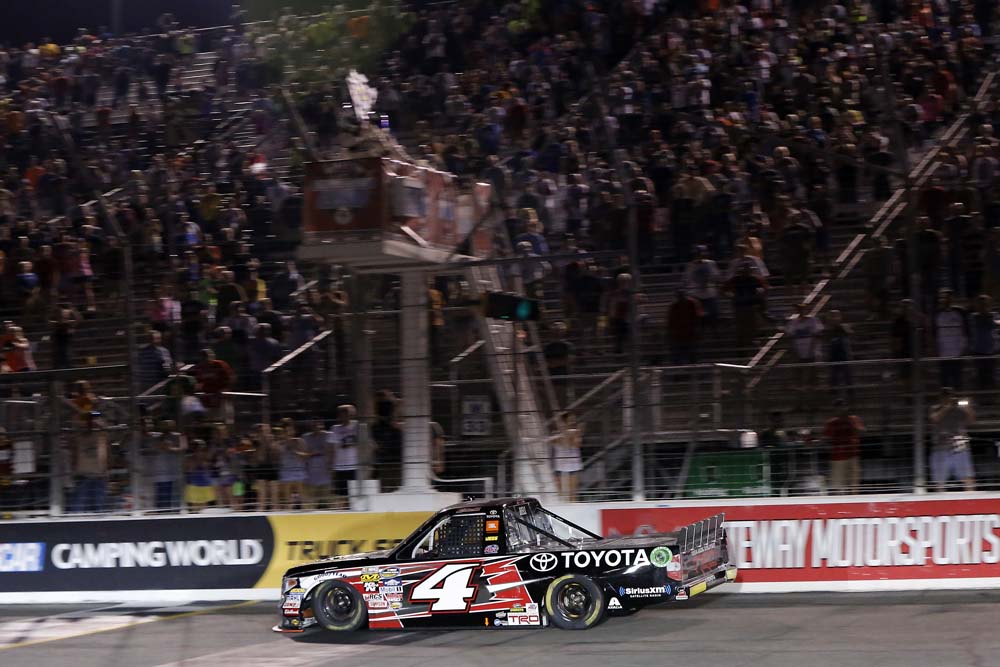 Bell had worked his way from his ninth starting position to the third position when the caution clock expired on lap 114 and set up the final round of pit stops. Veteran crew chief Jerry Baxter made what turned out to be the winning call when he elected to take four tires, while the majority of the teams inside the top 10 decided to take just two. The Toyota Racing over-the-wall crew executed a lightning quick four-tire and fuel stop and returned the No. 4 Tundra to the track scored in the fourth position for the lap-118 restart.

The talented youngster got a strong run on the outside lane through Turns 1 and 2 and as the field came down the backstretch the No. 4 Tundra was at the front of the field for the first time of the night. Bell had opened up a half-second lead on John Hunter Nemechek when the two-truck accident slowed the field with just 12 laps remaining.

On the ensuing restart, Nemechek chased Bell high into the marbles through Turns 1 and 2 and momentarily took over the lead. Things got dicey as trucks went three and four wide and the end result was a seven-truck accident that included Nemechek.

Bell avoided the mele and was left scored in the second position, behind Rhodes, when the field went back green with six laps remaining. The Oklahoma native was able to get the lead back on the restart, but the two-truck accident which led to the fisticuffs, brought out the red flag and set up the final two-lap shootout.

“I had one restart there as the leader late in the race, but a couple of them back picked the top and got used up a lot bit, so I figured the safest thing was going to be to run the bottom because I knew my truck was turning pretty good,” Bell said of his decision to take the bottom lane on the final restart. “This guy (Jerry Baxter, crew chief) right here, he’s the man, let me tell you. Thank you, Jerry.”

Bell picked up his first win of 2016 and his second overall victory across 15 career NCWTS starts. Rhodes finished 0.275 seconds behind Bell in the runner-up spot. Daniel Hemric, Johnny Sauter and Bell’s KBM teammate Erik Jones rounded out the top-five finishers. William Byron in KBM’s No. 9 Liberty Tundra lead a race-high 47 laps, but was relegated to a 17th-place finish after getting caught up in a late accident.

The ninth race of the 2016 season featured nine cautions for a total of 44 laps. There were 10 lead changes among six drivers, including Bell who led twice for 38 laps. With the win, Bell moved up three position to ninth in the Truck Series championship standings and with his win would currently be in the inaugural elimination-based playoff format in the Truck Series.

Bell will be back behind the wheel of the No. 4 JBL Tundra when the Truck Series resumes action Thursday, July 7 at Kentucky Speedway in Sparta. Live coverage of the Buckle Up in Your Truck 225 begins with the NCWTS Setup show at 8 p.m. ET on Fox Sports 1.