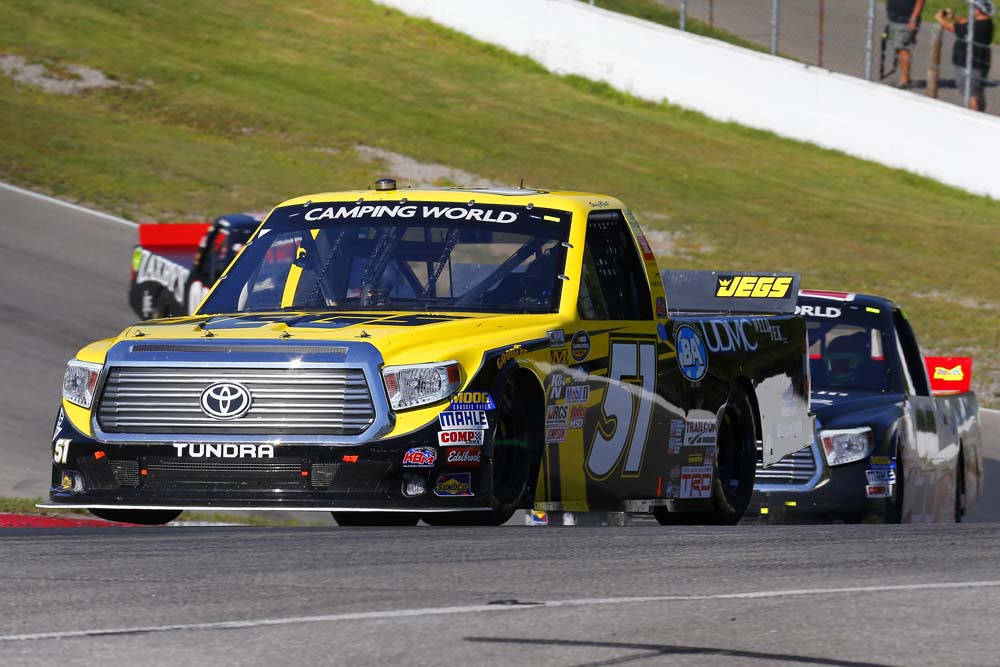 Clarington, ON – Results can be measured in black and white but Gary Klutt and his No. 51 Kyle Busch Motorsports (KBM) JEGS/UMDC/Bothwell Accurate Tundra will measure the results from the event at Canada’s Canadian Tire Motorsports Park (CTMP) as a successful first start in the NASCAR Camping World Truck Series.

The Canadian NASCAR Next driver crossed the line in 11th position when all the smoke cleared. The Kevin “Bono” Manion led team laid a perfect plan for the 64-lap, 2.459-mile famed road course. The race was playing out for Klutt as he was slowly and methodically making his way up to fourth from his 15th starting spot on the 32-truck field. A lap 25 pit stop for tires and fuel dropped the No. 51 JEGS/UMDC/Bothwell-Accurate Tundra to 17th as many still had not made their first stop.

The NASCAR Next product again started his march to the front and in a few short laps was back to the top 10. His second stop of the day on lap 34 was expected to be the final pit road activity of the day, unfortunately after the stop for fuel, Klutt stalled the No. 51 Tundra and lost almost a lap on pit road. Manion’s veteran presence atop the box was able to keep his young driver calm, but he returned to the race back in the 24th position. “It felt like eternity trying to restart while rolling down pit road,” said Klutt.

With losing track position, the race strategy changed and on lap 44 Klutt was on pit road for his final four tire stop. After restarting 21st, the No. 51 Tundra began picking up several spots and by the time a caution occurred on lap 53 the team was back in the top 10.

From there to the end, the race was slowed by three more cautions and Klutt needed longer green flag runs to have time to get to the front. “I know that I could have been far more aggressive on the final restart, but the plan all weekend was to make sure that we finished without a torn up Tundra,” said Klutt.

“Overall I learned a ton, running my first race in these heavy trucks and on radial tires,” said Klutt. “I had blast driving from the back of the field a couple of times, and brought the Tundra home in one piece. I can’t thank KBM enough for this opportunity and for providing me with such a great team and great equipment… The Silverado 250 at CTMP is definitely staying on my calendar of races to run for years to come”