Kentucky is a Clean Slate for Gragson 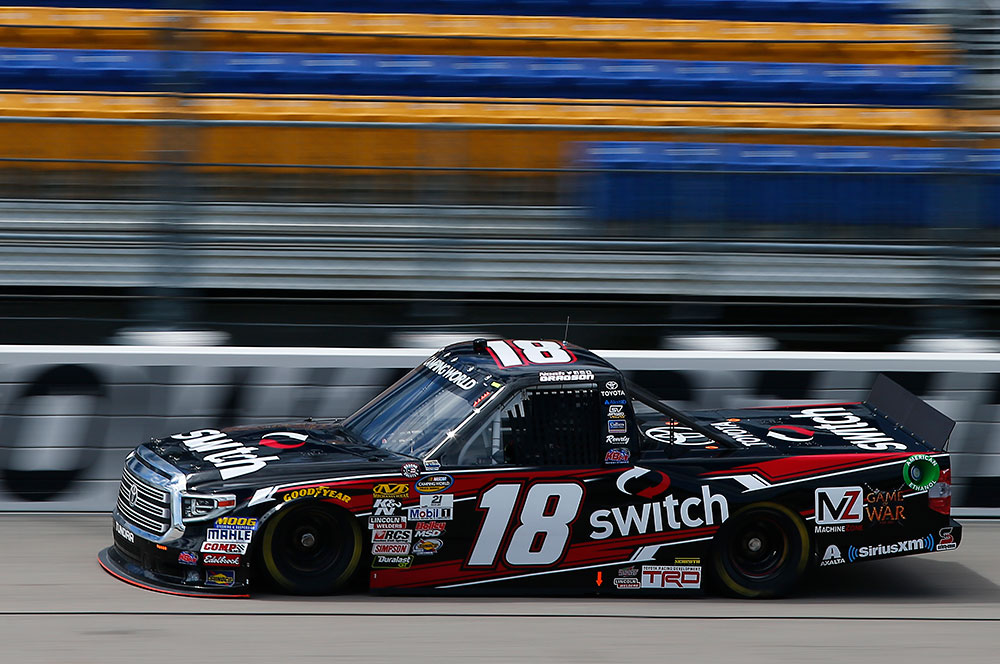 MOORESVILLE, N.C. (July 4, 2017) – Although rookie Noah Gragson has one prior start at Kentucky Speedway in a 2015 ARCA Racing Series event, the experience he gained at that race will not benefit him very much when he returns to Kentucky this week since the track has changed drastically after it was repaved last year.

A comprehensive renovation of Kentucky Speedway was completed last June. The endeavor included increased banking in turns one and two, improvements to its drainage system, additional SAFER barriers and a complete repave of the racing surface. An additional layer of asphalt was applied last fall and allowed to cure over the winter months. The NASCAR Camping World Truck Series drivers will be the first to experience the new pavement in competition Thursday night in the Buckle Up in Your Truck 225.

Kentucky is no longer the bumpy surface Gragson remembers from the ARCA race in 2015, but that will not shake his confidence. Kyle Busch Motorsports (KBM) is the defending winner of last year’s race with William Byron, so Gragson has a solid baseline set-up for his No. 18 Switch Tundra to begin the three practices scheduled for Wednesday afternoon. KBM teams have three wins at Kentucky with Byron last year and owner-driver Kyle Busch in 2011 and 2014. They have led 582 laps and collected 10 top-five finishes in 18 starts.

Gragson has been on a roll this summer posting two poles (Texas and Iowa) and five consecutive top-10 finishes. In the first four races of the season, the 18-year-old had an average finish of 18.0. His average finish for the last five races is 8.0, a significant improvement in a short amount of time. With tracks like Kentucky, Pocono and Michigan on the horizon, he hopes to turn those top-10 finishes into consecutive top-five finishes and wins.

Will your previous ARCA start at Kentucky in 2015 benefit you since the track was repaved since then?

“It’s completely different now, but it was super bumpy when I raced there. I really don’t know what to expect now. I’ve been watching video of the races from last year, and they have put down more asphalt since then, so it will be totally different. The track will probably be pretty single-grooved, so I’m going into it open minded and treat it kind of like I did Texas Motor Speedway. We sat on the pole there, so I think we’ll be alright. We have three practices so that will help, and I’m sure the XFINITY cars will put down more rubber in practice before our race.”

Since KBM won at Kentucky last year, do you go off Rudy (Fugle, crew chief) and William Byron’s set-up notes?

“Rudy and my crew chief Marcus (Richmond) work really closely so we’ll definitely use their notes from last year as a starting point. All the KBM crew chiefs work well together and help each other out. Our trucks are set up pretty similarly when we get to the race track. We just have to work hard and stay focused. The preparation will be there, so we just need to execute. The surface will be new for everyone so we’re kind of all in the same boat.”

You are taking the same Tundra you finished ninth with at Charlotte in May. Do you have a favorite truck yet?

“My favorite truck so far was the one I just raced at Iowa and a few weeks earlier at Dover. It’s pretty fast and it’s been good to me. I won my second pole of the season with it at Iowa. There are no bad trucks at KBM, but there will always be some cars or trucks you like better than others. I know coming into every race the guys have prepared a fast Switch Tundra for me.”

How do you prepare for a newly paved track?

“The race track is probably going to be pretty slick until some rubber gets laid down. Since they put down more new asphalt in the fall, there will probably be just one groove, and it’s usually pretty hard on tires. The track is going to be really fast and slick so we have to be smart and try to use strategy to be in the right spot at the right time. Since we have three hours of practice on Wednesday and the XFINITY cars get about three hours before our race on Thursday, I’m hoping that will start to work in a second groove.”

Does a new surface even the playing field for everyone?

“I think so. Noah won’t be the only driver out there getting comfortable with the new surface, it will be new for the veterans as well. I wouldn’t say being a rookie is an advantage, but it’s certainly less of a disadvantage when nobody knows what to expect from the track. If it rains between our final practice and the race, that will change the track for everyone too.”

KBM-042: The No. 18 Switch team will race KBM-042, for Thursday’s Buckle Up in Your Truck 225 at Kentucky Speedway. This is the same Tundra Gragson raced at Charlotte earlier this season where he finished ninth.

Richmond has one win, five top-five and seven top-10 finishes in 12 starts as a NCWTS crew chief at Kentucky. His team lead 26 laps for the win in 2013 with Ty Dillon behind the wheel.