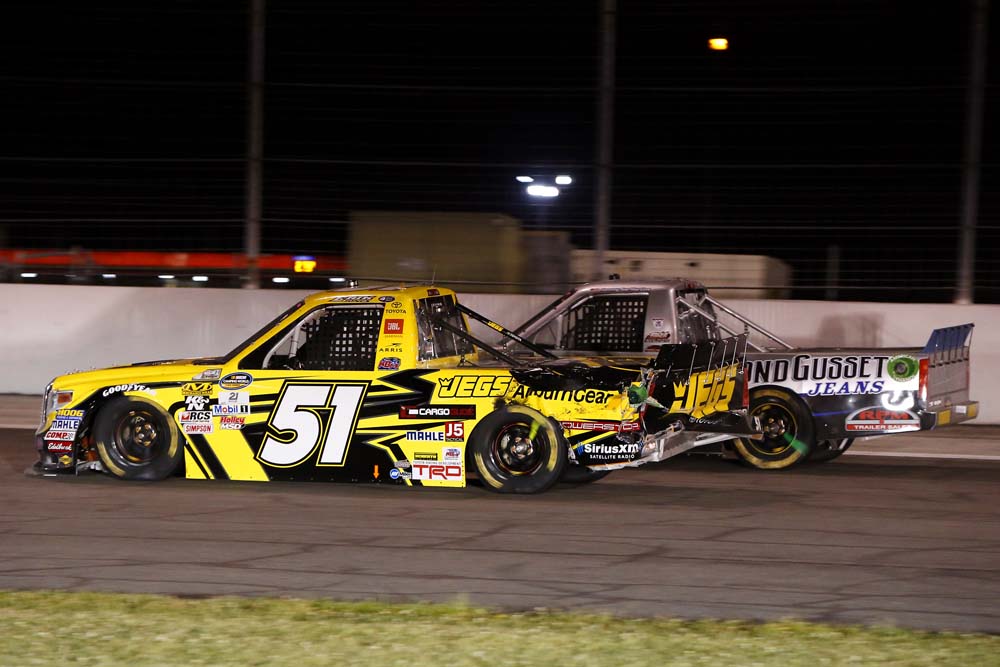 Pinch-hitting for Cody Coughlin in the No. 51 JEGS/Auburn Gear Tundra during Saturday’s Drivin’ for Linemen 200 at Gateway Motorsports Park in Madison, Ill., Erik Jones found himself down in the count early in the 160-lap event. On lap 25, Jones’ Toyota hit a bump entering Turn 3 and shot up the track into the outside wall collecting Cameron Hayley along the way.

After several trips down pit road to repair significant damage to rear of the truck under caution, the 2015 NASAR Camping World Series champion was scored one lap down in the 28th position for the restart on lap 31. The Kyle Busch Motorsports over-the-wall crew got another chance to make repairs to the JEGS/Auburn Gear Tundra during a caution from laps 66 to 70 and then on lap 72 their hard work payed off when Jones was in the lucky dog position when the field was slowed for the fourth time.

During the next green flag run, the Michigan native advanced from the 25th position on the lap-78 restart all the way up to 12th when the caution clock expired on lap 114. Troubles continued for Jones when he visited pit road for a four-tire and fuel stop and the over-the-wall crew only got four lug nuts tight on the left rear. Crew chief Bono Manion summoned his driver back to pit road to tighten the fifth lug nut.

Jones took the ensuing restart from the 25th position and once again began to march forward. By the time a three-truck accident slowed the field for the sixth time on lap 120 he had maneuvered into the 12th spot and on lap 131 he returned to the top 10. Things got dicey on a restart with 11 laps remaining, and an accident collected three of the top-five trucks, moving the seven-time Truck Series winner up to the sixth position for the closing laps. He was able to pick up one more spot during a two-lap shootout to end the race and picked up his 19th career top-five finish across 41 career Truck Series starts. 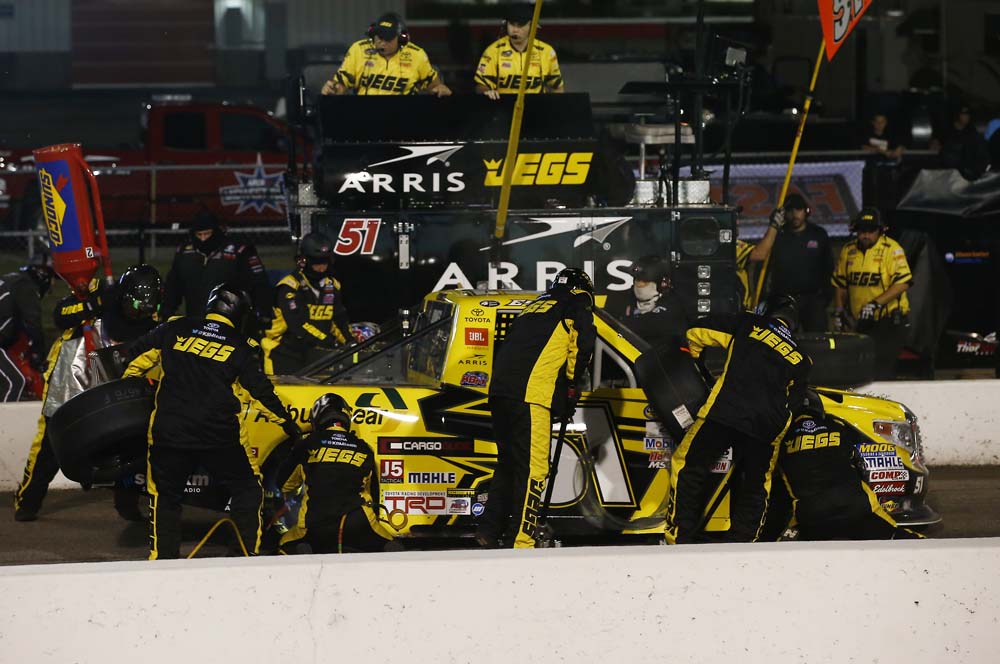 “That was a long day for sure and not the day we were looking for, but I just made a mistake at the start and got us in a bad spot there early on,” Jones said. We had a fast truck. We were working our way to the front and I think we were passing for sixth or seventh at that point and just got loose, got into Cameron (Hayley), spun him out and ruined his day and really hurt our day as well. A long day fighting back and everybody did a good job to get the JEGS Tundra back in it and I didn’t know how much damage we had until I got out after the race and saw it, but pretty impressed we were able to get a fifth-place run out of it. Good building day for these guys. Glad I could help them out a little bit this weekend and I think they’ve got some wins coming this year for them.”

Jones’ KBM teammate Christopher Bell picked up his first win of 2016 and his second overall victory across 15 career NCWTS starts. Ben Rhodes finished 0.275 seconds behind Bell in the runner-up spot. Daniel Hemric, Johnny Sauter and Jones rounded out the top-five finishers. William Byron in KBM’s No. 9 Liberty Tundra lead a race-high 47 laps, but was relegated to a 17th-place finish after getting caught up in a late accident.

The ninth race of the 2016 season featured nine cautions for a total of 44 laps. There were 10 lead changes among six drivers. With nine of 23 races complete, the No. 51 team sits 17th in the Owner’s championship standings.

Daniel Suarez will be back behind the wheel of the No. 51 ARRIS Tundra when the Truck Series resumes action Thursday, July 7 at Kentucky Speedway in Sparta. Live coverage of the Buckle Up in Your Truck 225 begins with the NCWTS Setup show at 8 p.m. ET on Fox Sports 1.