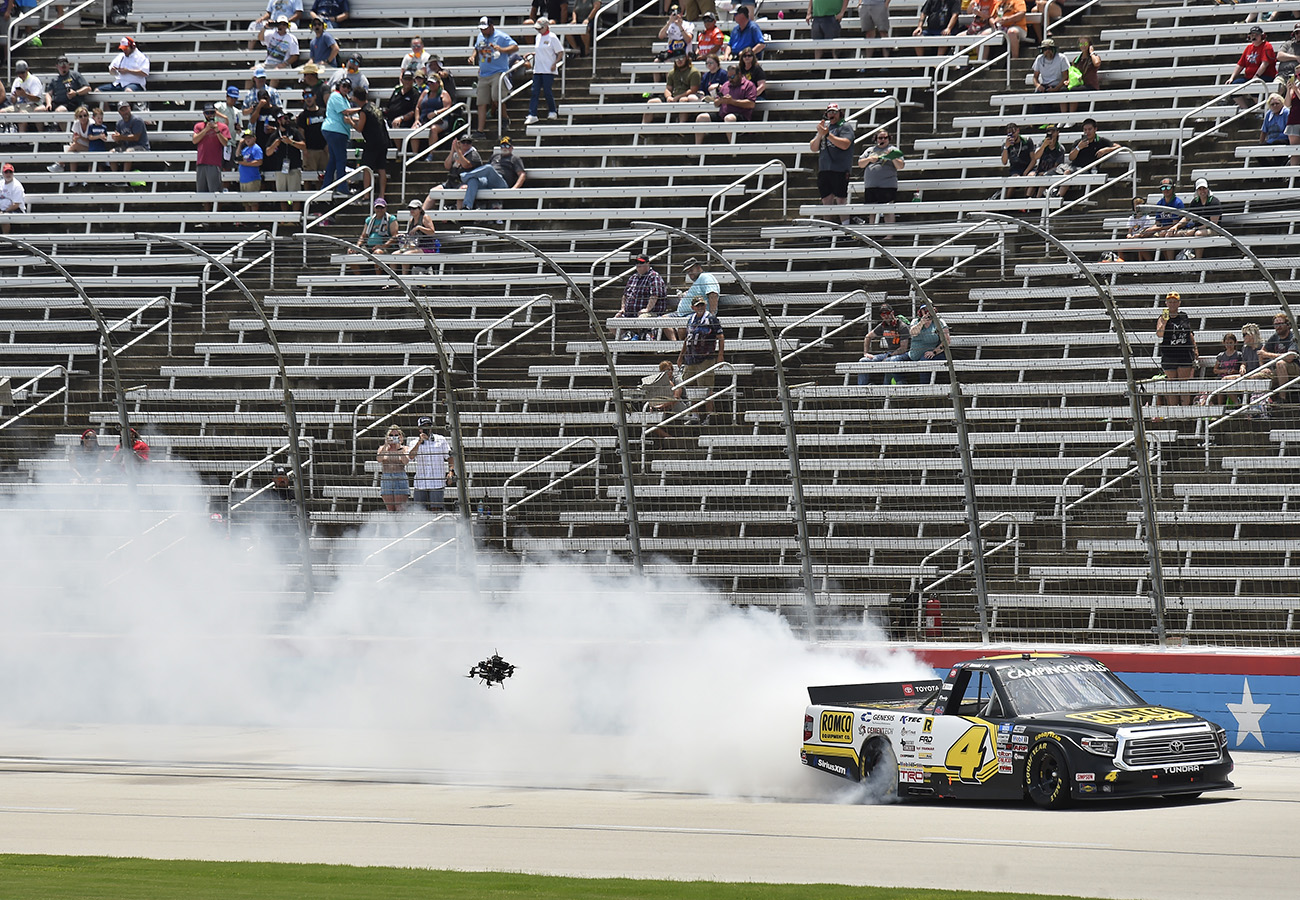 John Hunter Nemechek captured his fourth victory of the 2021 season in the SpeedyCash.com 220 at Texas Motor Speedway. Nemechek was running second to 2020 NASCAR Cup Series champion Chase Elliott as teams began making their final scheduled pit stops. Crew chief Eric Phillips played the strategy card and kept the ROMCO Equipment Co. Tundra out longer than Elliott under green flag conditions in the final stage and when stops cycled through the move paid off and Nemechek was at the front of the field. Nemechek led a race-high 64 laps en route to his 10th career Truck Series victory.

John Hunter Nemechek, driver of the No. 4 ROMCO Tundra for KBM

Are you starting to make a statement with this team right now?

“Yeah, I definitely think so. I feel like we’ve been making a statement all year. I feel like we’re one of the favorites every time that we show up to the racetrack. I can’t say enough about Eric Phillips (crew chief) and all these guys. Everyone, the pit crew, everyone at KBM (Kyle Busch Motorsports), the fab shop, machine shop, chassis shop. Everyone does so good with building our trucks and I’m just lucky enough to be behind the wheel. It’s amazing to get win number four here. I haven’t won with ROMCO Equipment on board yet in my career so finally we were able to get them a win. There’s 250 of their employees here today so huge shoutout to them as well as the fans.”

How would you describe your race today?

“I feel like we had the dominant truck kind of like we do every single week. I’m just proud to be able to be behind the wheel and blessed to be behind the wheel. Huge shoutout to Kyle (Busch, team owner) and Jack (Irving, TRD) and Tyler (Gibbs, TRD) and David Wilson (president, TRD) and everyone at Toyota for giving me this opportunity. Without them, none of this would be possible. ROMCO Equipment on board, their first win with me so it will be cool to be able to go to victory lane with them. These fans are awesome. We have 250 ROMCO employees here as well today. We just want to keep racking them up. We’re #Here4Wins.”

Are you Playoff ready or what does this team need to work on prior to the Playoffs starting?

“I hope this is only the beginning. I hope that we have a lot more to come. I feel like we have a lot more work to do. These guys work their tails off. I know Eric (Phillips, crew chief) is one of the first guys there and last ones to leave every night. It’s awesome. Win number 41 for him. Win number 10 for me. Just have to keep it going. We’re #Here4Wins.”

After 11 races, Nemechek and the No. 4 team continue to lead Ben Rhodes in the point standings by 78 points.

The No. 4 team returns to the track when the NASCAR Camping World Truck Series resumes action on Friday, June 18 at Nashville Superspeedway. Live coverage will be on FS1, Motor Racing Network and SiriusXM at 8 p.m. ET.