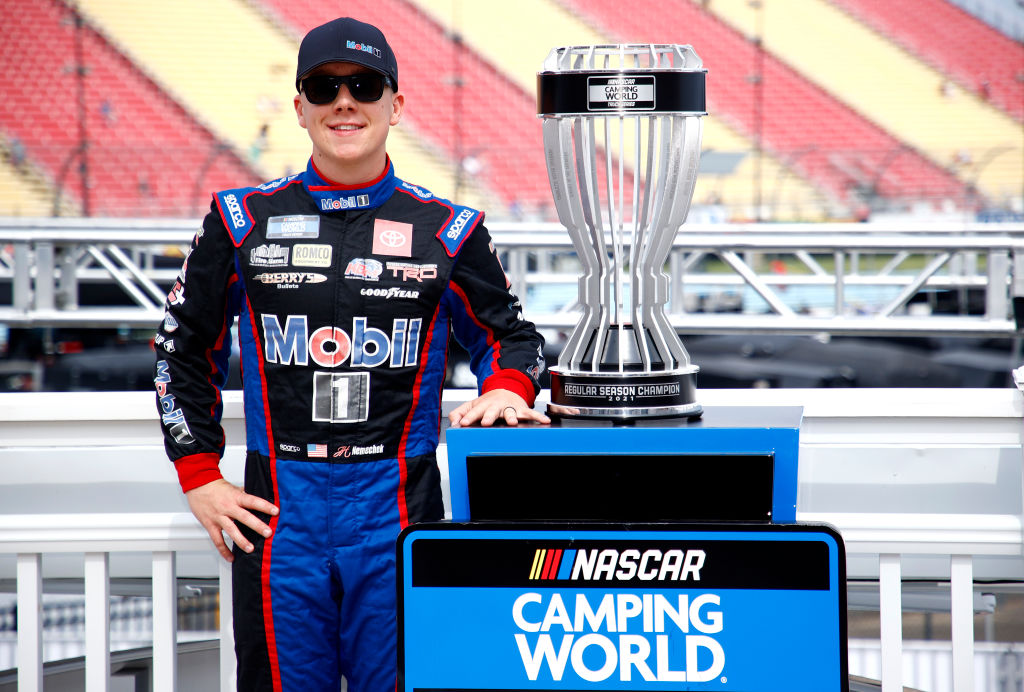 Having already clinched the regular season NASCAR Camping World Truck Series championship heading into Saturday’s race at Watkins Glen Internationally, John Hunter Nemechek lone goal was to win stages and win the races and add playoff points to his bank. The Mobil 1 driver came up just short, finishing runner-up in Stage 2 and he was also running second when lightning struck in the area and eventually led to NASCAR calling the race complete 11 laps short of the advertised distance.

When the playoffs start Aug. 20 at World Wide Technology Raceway at Gateway will be the top seed of the 10 drivers who qualified for the seven-race, elimination-style playoff format.

Do you think you may have had something for Austin Hill in the final laps if the race was restarted?

“Possibly, it’s hard to say with the high downforce package that we have on these trucks, dirty air is really bad. You get super aero-tight behind other trucks and it kind of gives you a disadvantage being the second guy compared to being in clean air. Overall, we had a really fast Mobil 1 Toyota Tundra today. I feel like Austin (Hill) had the dominant truck all day. I do feel like we were better in certain spots, and he was better in other spots on the racetrack. Who knows what would have happened, he could have made a mistake, I could have made a mistake. It’s part of racing. I felt like if he would have slipped a little bit or if I could have gotten side-by-side with him, I feel like we probably could have made the pass and possibly drove off. I don’t know how fast, but I felt like we were playing cat and mouse with trading back who was faster on certain laps.”

What happened between you and Ben Rhodes on lap one?

“I wheel-hopped really bad getting into turn one and apologized to Ben (Rhodes). I’ve spoken to Ben and apologized to his team guys as well. That’s not how I want to race and that’s not my intention to take somebody out. I’m better than that and I should have never made that mistake, but wheel-hopped and I was just along for the ride at that point. We’ve raced hard against them all year and we’ve traded paint, but we’ve been respectful about all of it. It sucks that happened here at Watkins Glen.”

Is this your championship to lose or is it too soon to determine that?

“I feel like the race tracks that are coming up are really good for us. I enjoy the race tracks we’re going to for the first round and the second round. It all comes down to Phoenix. You have to make it there, be in the final four and whoever has the better race and plays the strategy right. Cautions may fall, we saw that last year as well. We’re on our ‘A’ Game I feel like, and we’ve been preparing fast trucks all year and we just have to keep the momentum rolling. Have to try to be that one that’s the favorite going into Phoenix.”

Nemechek won the regular season championship and will start the playoffs as the top seed. He opens the playoffs 48 points above the cutoff line for advancing to the Round of 8.

The No. 4 Mobil 1 team returns to the track when the NASCAR Camping World Truck Series opens the playoffs on Friday, Aug. 20, at World Wide Technology Raceway at Gateway. Live coverage will be on FS1, Motor Racing Network and SiriusXM at 9 p.m. ET.