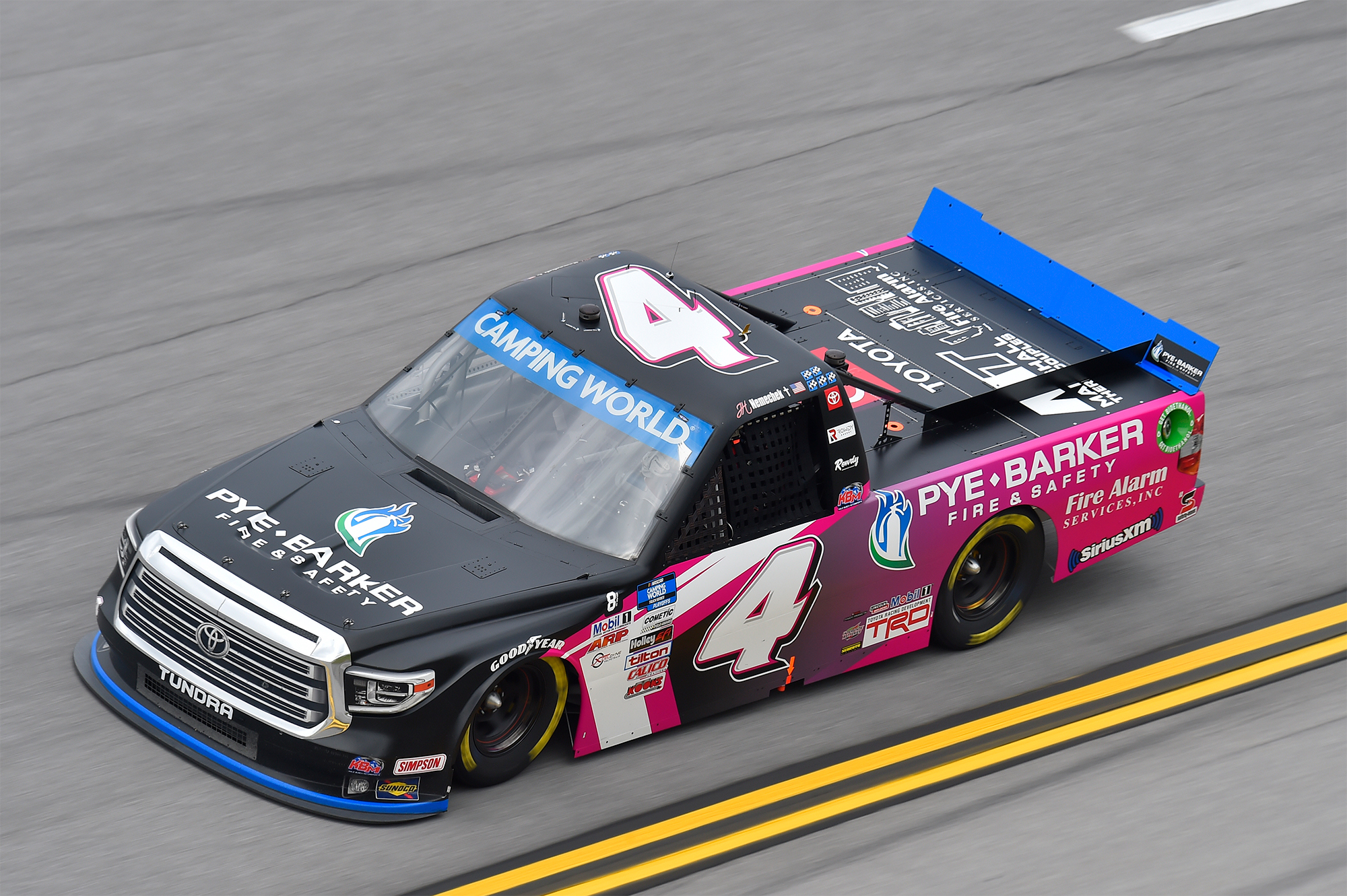 John Hunter Nemchek finished fourth in an eventful NASCAR Camping World Truck Series playoff race at Talladega (Ala.) Superspeedway. Nemechek was able to run in the top-10 for a majority of the first two stages and pick up an additional five stage points.

Nemechek avoided three different accidents throughout the final stage and restarted overtime from the third position. As the field came through the tri-oval for the final time, Nemechek was in the lead before being turned and crossing the finish line sideways in the fourth position.

With just one race left in the Round of 8, Nemechek sits 36-points above the cutoff line to advance to the Championship 4.

John Hunter Nemechek, driver of the No. 4 FAS/Pye-Barker Tundra for KBM

What happened on the final lap coming to the checkered flag?

“I had a run, got by the 38 (Todd Gilliland) and was trying to keep the 12 (Tate Fogleman) in the mirror. He had a huge run through the tri-oval. He faked high and I went to block high and then the block was a little too late I guess. I should have stayed up and probably still would have won the race. Overall, solid day for our Pye-Barker Fire & Safety Services Toyota Tundra. Us and the Toyota teammates worked very well together. We had a Toyota train going there at one time today. Solid points day for us – 35 above the cut line I think or something like that going into Martinsville. Just have to survive and advance to get to the final four.”

Are you upset with the 12 truck or is that just restrictor plate racing?

“That’s just how every race here for the past however many years has ended some way like that. It is what it is. I can’t be mad. As much as you want to be mad, you can’t be mad. It’s partly my fault. You take it with a grain of salt. I’m more mad at myself than anything for not staying higher to kind of stay away from him. It is what it is.”

Do you feel Matt Crafton was justified to be upset with the pushing in today’s race?

Nemechek has moved back into the top spot of the NASCAR Camping World Truck Series driver championship standings following a fourth-place finish at Talladega (Ala.) Superspeedway. He currently sits 36-points above the cutoff line to advance to the Championship 4.

Nemechek and the No. 4 team will head to Martinsville (Va.) Speedway for the final race of the Round of 8 on Oct. 30. Live coverage will be on FS1, Motor Racing Network and SiriusXM at 1 p.m. ET.