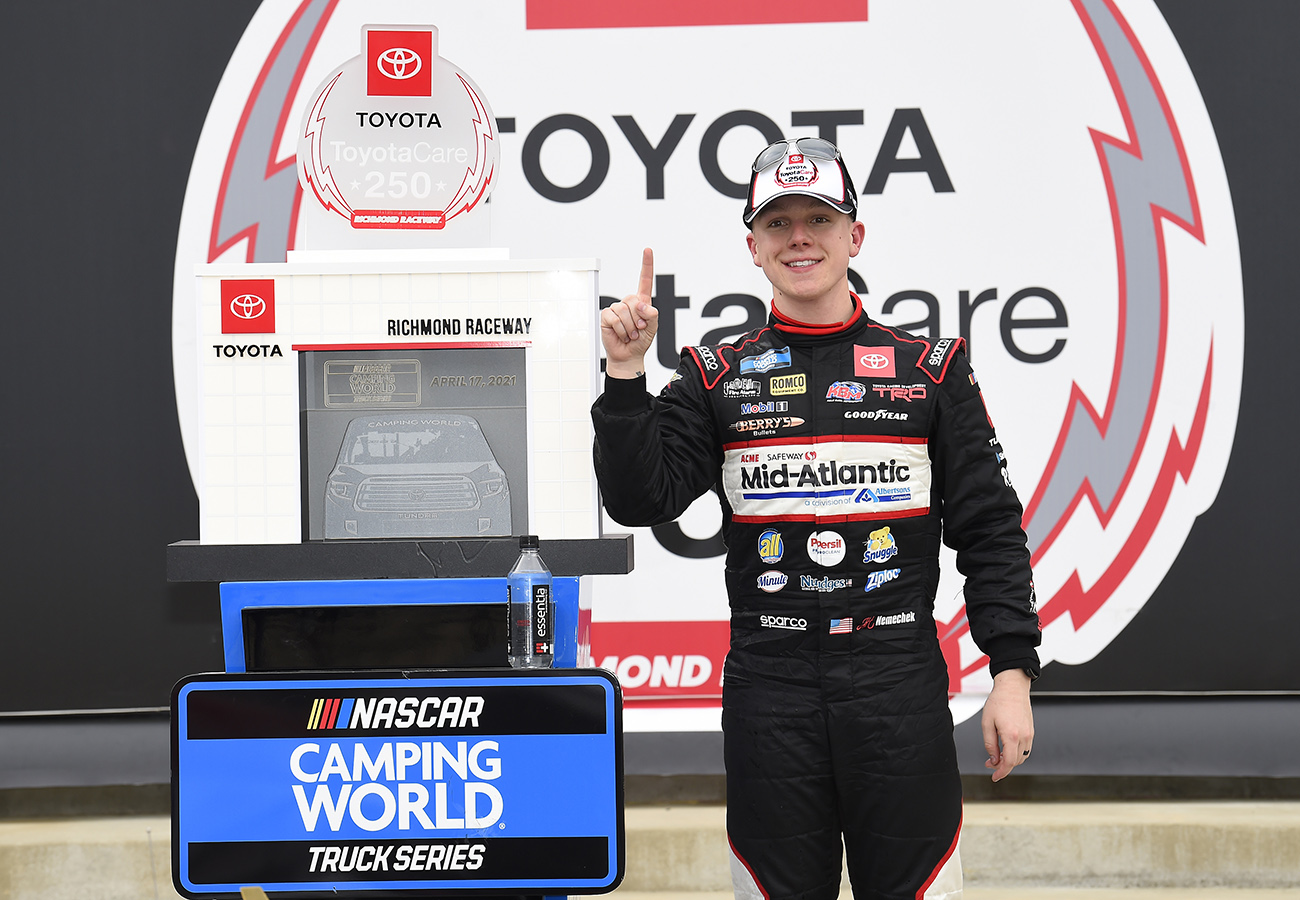 John Hunter Nemechek captured his second checkered flag of the 2021 season holding off boss and teammate Kyle Busch in the closing laps of the ToyotaCare 250 at Richmond Raceway.

When the green flag unfurled, Nemechek quickly worked his way from his 18th starting position to the front of the field to finish the first stage in second. After adjustments on pit road, Nemechek was able to garner the race lead on lap 100. Nemechek would receive a playoff point and 10 additional points for his stage two victory.

The second-generation driver would continue to lead until Lap 198 when crew chief Eric Phillips brought the No. 4 Safeway Tundra to pit road for four tires and fuel. Nemechek would restart from the ninth position before working his way back to the race lead. The veteran driver was able to pass teammate Chandler Smith for the race lead on Lap 234 to secure his second victory of 2021.

With his victory, Nemechek continues to lead in the Camping World Truck Series points standings.

John Hunter Nemechek, driver of the No. 4 Safeway Tundra for KBM

What does it mean to be a two-time winner this season?

“It’s just so special. Just thankful for all my guys here. They are awesome and gave me one heck of a Safeway Toyota Tundra. Just can’t thank all of our partners enough for believing in me — Kyle (Busch, team owner) and everybody. I know he tried getting me there at the end and this is the third time we’ve raced against each other this year and I’m one up on him so far in his own equipment so that’s nice. Just super thankful, super blessed. Actually, this trophy and flag, before I walked out of the motorhome, Taylor (Nemechek, wife) said you brought me home a trophy from Vegas now this is Aspen’s first race so bring her one. We did it.”

“Way different than anything I’ve ever experienced or raced here. It took a little bit of adapting, but this Toyota Tundra was rolling. Dominant day again and same truck that we had in Vegas, so this is our baby and we’re going to take care of it.”

After six races, Nemechek and the No. 4 team extend its points lead over Ben Rhodes to 20 points.

The No. 4 returns to the track when the NASCAR Camping World Truck Series resumes action on Saturday, May 1 at Kansas Speedway in Kansas City. Live coverage will be on FS1, Motor Racing Network and SiriusXM at 7:30 p.m. ET.