It’s Déjà vu All Over Again at Iowa 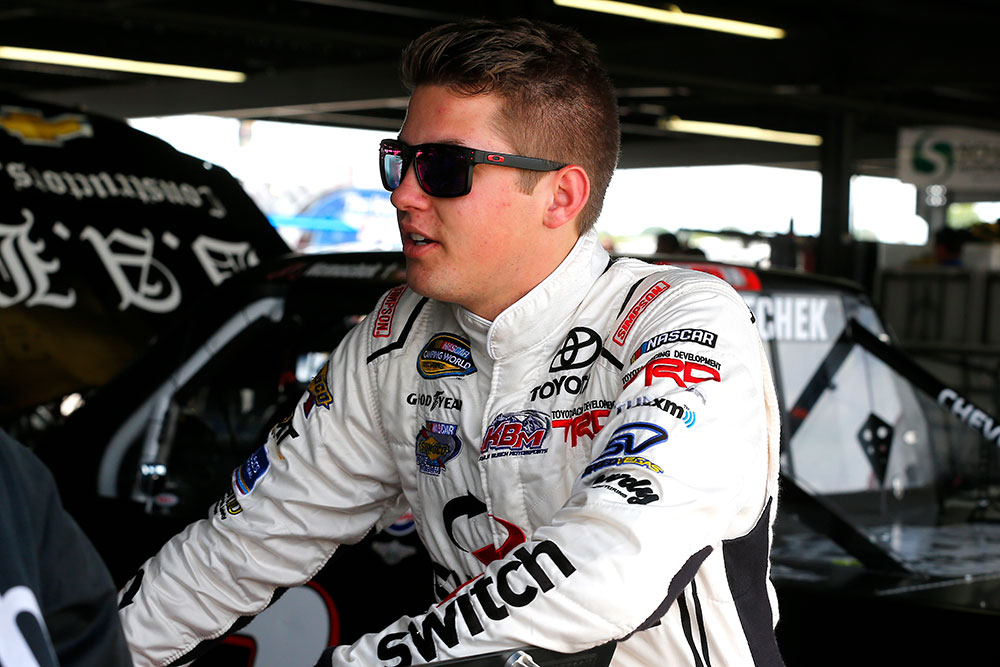 MOORESVILLE, N.C. (June 20, 2017) – Being a rookie in the NASCAR Camping World Truck Series (NCWTS) means everything is new. Getting to know your teammates, learning the feel of the trucks and visiting several new tracks for the first time. It can be quite a challenge, so finding something familiar is always a bonus. This weekend Noah Gragson heads to Iowa Speedway for the M&M’s 200 where he has the most experience of any track on the NCWTS schedule.

Gragson also another has a former Iowa winner to lean on this weekend, his spotter Brandon McReynolds. The son of former crew chief turned television analyst, Larry McReynolds, Brandon swept both K&N Pro Series races at Iowa in 2015. His experience and knowledge of the track will benefit Gragson as McReynolds helps him navigate his way around the 0.875-mile oval.

In addition to his K&N experience, Gragson was able to test his No. 18 Switch Tundra at Iowa in April. Although rain washed out most of the second day of testing, he was able to log a lot of laps and get some long runs under his belt during the first day. The test gave him a chance to feel out any changes in the track since last year, and learn how the trucks handle versus a K&N car.

The Switch team has scored top-10 finishes in their last four races and would like to improve upon that streak with a string of top-five finishes, and a few wins. Gragson has not finished outside of the top nine since a broken clutch ended his night early at Kansas Speedway in early May. He had a great run at Texas Motor Speedway two weeks ago when he captured his first pole and led 13 laps, the first of his NCWTS career.

This weekend as Gragson returns to Iowa Speedway, a place familiar to him, he would like to experience something new – his first trip to Victory Lane in the NCWTS. KBM teams are very familiar with Iowa’s Victory Lane having won the last three consecutive races there (William Byron 2016 and Erik Jones 2015, 2014). Now Gragson wants his turn.

Do you have more confidence going into Iowa since you have three previous starts and tested the truck there?

“I’m really looking forward to Iowa and think it’s going to be a good race for us. I have experience there in a K&N car, which is a little bit different, but we tested there in April so I kind of know the characteristics of the track for the most part. It changes throughout the winter since it’s so cold in Iowa and then heats up during the summer, so you get bumps and it’s a little bit different year to year. It will be different racing in the truck, but I have a lot of confidence going into this race and am really focused on winning. I think we have a good shot at it.”

Your spotter, Brandon McReynolds, swept both K&N races at Iowa in 2015. How helpful will it be to have him coaching you from the spotter’s stand?

“It helps being on the same page with your spotter. I live with Brandon, so we sit down and watch film together during the week of the upcoming races. He’s won there and had success, so obviously he knows how to get around that place and maybe he knows some stuff that I don’t know, so I’m always open to listening to him. His knowledge will be very valuable to me and I’ll use it to my advantage.”

Gateway was your fourth-consecutive top-10 finish. What do you need to do to consistently be in the top five?

“I feel like we are there. We have all the puzzle pieces. I didn’t feel like we were great at Gateway, but we were able to finish ninth. The other races at Dover and Texas I felt like we were really fast. We were one of the fastest trucks, so now we just need a little luck to help us out and all the puzzle pieces to fit together. We’ve got to stay focused and eventually it will come.”

What things did you work on during your test at Iowa in April?

“We unloaded really well. KBM has run really well there the last few years, so we had a really good baseline set-up to start with. We let Noah get a lot of laps and make some long runs. Iowa has a lot of different grooves, so he got to run some different grooves to see what he liked best. He got up to speed pretty quickly since he’s already made three starts at Iowa in a K&N car, so he was familiar with the track.”

After four consecutive top-10 finishes, what will it take for Noah to consistently finish in the top five?

“As a team we need to be mistake free. I think once we minimize some of the mistakes we’ve made, the top fives will be there. It’s nobody’s fault, it’s just a learning curve and having a month of consecutive races has helped. It’s tough to find consistency with long breaks between races, so I think as a team we’ll hit our stride as the summer continues.”

KBM-036: The No. 18 Switch team will race KBM-036, for Friday’s M&M’s 200 at Iowa Speedway. This is the same Tundra Gragson raced at Dover earlier this month where he finished ninth.

Richmond has three top-five and seven top-10 finishes in 10 starts as a NCWTS crew chief at Iowa. His best finish was second place with Ty Dillon in 2012 and Cole Custer in 2016.