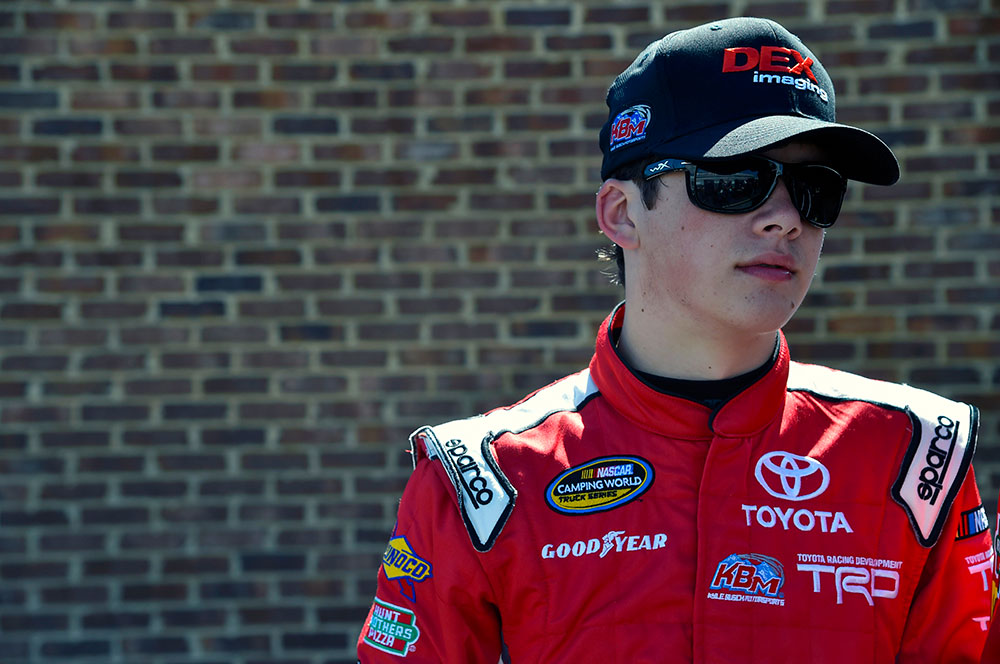 MOORESVILLE, N.C. (August 14, 2017) –  Bristol (Tenn.) Motor Speedway is known for its short length, high banking, loud sounds and stadium-like aesthetic. “The Last Great Colosseum” is one of the most popular tracks on the NASCAR circuit and provides exciting short-track racing for fans and drivers alike.

Wednesday’s UNOH 200 under the lights at Bristol will mark Harrison Burton’s fifth start for Kyle Busch Motorsports (KBM) in the NASCAR Camping World Truck Series (NCWTS) in the No. 51 DEX Imaging Toyota Tundra for the 2017 season, but the 16-year-old is no stranger to Victory Lane at Thunder Valley.

The rookie has had a solid season so far in his first four NCWTS races piloting the No. 51 Tundra. He made his season debut at Martinsville (Va.) Speedway where he started the race from the seventh position and after a late-race spin that put him near the rear of the field, he worked his way back to a solid 13th-place finish. His second race of the season came at Dover (Del.) International Speedway where Burton started the race 10th and raced his way to a 13th-place finish. At Iowa Speedway, the Huntersville, N.C., native rolled off 14th and was en route to a top-five finish until an incident on the last lap resulted in a career-best 11th-place finish. In Burton’s latest event for KBM, he made his dirt-racing debut at Eldora Speedway in Ohio and started 23rd but brought home a hard-fought 15th-place finish.

After Bristol, Burton has one more NCWTS event behind the wheel of the No. 51 Tundra in 2017 at Martinsville (Va.) Speedway Oct. 28.

For Wednesday’s race under the lights, Burton will don the colors of his sponsor DEX Imaging. DEX Imaging, based out of Tampa, Fla., is the nation’s largest independent provider of office technology with a local touch. Burton is thrilled to have them back on board his No. 51 Toyota Tundra at one of his favorite race tracks on the racing circuit.

Although Burton has already won one sword at Bristol Motor Speedway this season, he says winning his first NCWTS race at “The Last Great Colosseum” would be even more special to him. He’s confident that Wednesday when the checkered flag waves, he will have a chance to take his No. 51 DEX Imaging Tundra to Victory Lane for the first time.

This week you’ll be competing for the win at Bristol, you already have one win in the NASCAR K&N Pro Series there this season, what can you bring from that to the NCWTS?

“First, I’m really excited to go to Bristol! It’s one of my favorite tracks to race at and I feel like it’s also one of my best tracks. Getting my first K&N win there was so exciting and I learned so much about the track in that race. I’m hoping I can take my skills and get my No. 51 DEX Imaging Tundra dialed in and compete for my first NCWTS win there as well.”

Harrison Burton is back in the No. 51 DEX Imaging Tundra, what are you looking forward to about racing at Bristol Motor Speedway?

“I’m looking forward to racing under the lights on Wednesday night at Bristol and working to get our No. 51 DEX Tundra dialed in for Harrison (Burton). We have two practice sessions Wednesday to work on our setup and make sure our Tundra is ready to race. Harrison won here earlier in the season for the K&N Pro Series East and I’m hoping he can bring that experience over to the Truck Series. He is a smart kid and a quick learner, so I’m confident we will have a successful race Wednesday night.”

Daniel Suarez qualified second and led 77 laps before being relegated to a 29th-place finish last season in Manion’s lone Truck Series race at Bristol. He earned one win, one top-five and three top-10 finishes in four XFINITY Series starts with Martin Truex Jr. While calling the shots in the Monster Energy NASCAR Cup Series, Manion earned two top-five and five top-10 finishes in 19 starts at Bristol.