It’s Back to School for Byron at Michigan 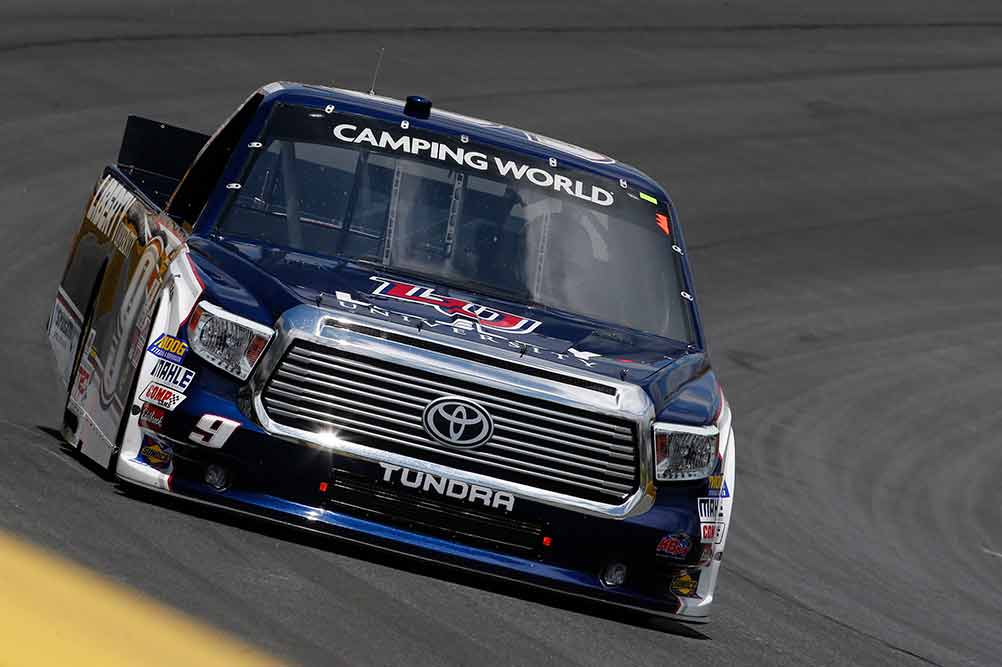 MOORESVILLE, N.C. (Aug. 23, 2016) – William Byron never stops being a student, whether on the track or in the classroom. He has two new learning curves ahead of him this week. First up will be the two-mile oval of Michigan International Speedway (MIS) in Brooklyn, followed by his first week of on-campus classes at Liberty University in Lynchburg, Va.

Byron has never raced at MIS in any series, but bigger tracks are nothing new for him. Four of Byron’s five NASCAR Camping World Truck Series (NCWTS) wins this season have come at tracks that are a mile-and-a-half, or larger in length. One of the biggest challenges of MIS is learning the draft. Although it is not a restrictor-plate track like Daytona or Talladega, the draft plays a big role at Michigan. Getting the feel of that in his Liberty University Tundra will be the first order of business for Byron upon his arrival in the Irish Hills.

He will have great resources behind him since his boss, Kyle Busch, won the NCWTS race at MIS last year. He will also be driving the same Tundra which took him to Victory Lane at Kentucky Speedway in Sparta last month after leading 70 laps.

Once the weekend is over, Byron will head to Liberty University for his next challenge as a student – his freshman year of college. Classes begin on Monday and he will juggle three on-campus classes, in addition to one online class and the nine NCWTS races which will remain this season. As if adjusting to your freshman year in college isn’t tough enough at times, Byron will also face the added pressure of being in the inaugural NCWTS Chase. He is locked into the Chase with five wins and is aiming to be one of the last four drivers at the season finale at Homestead.

So far Byron has had a very successful freshman year in the Truck Series and would likely be considered an honor roll student. It will be a total success if he can also be an honor roll student at Liberty, while bringing home a second NCWTS Driver’s Championship for Kyle Busch Motorsports in November and graduate at the top of the Truck Series class.

Since you have not raced there yet, what have you been told about racing at Michigan?
“I’ve been told that Michigan is a tougher race track than it looks, and that it is flatter than expected. I think this race will be all about working well in traffic and trying to stay in the right place to get the right draft runs on the leaders.”

Kyle Busch won this race last year. Have you talked to him about what to expect?
“Once I practice a little bit on Friday and get a feel for the track I will text Kyle about any questions I might have. He’s always really good about helping all of his drivers when they have questions or concerns at the track.”

Your first on-campus classes begin at Liberty University next week. What is your plan to balance racing and college?
“I’m looking forward to getting on campus soon. I think that being in a school setting will allow me to get my work done a bit easier, and I know that Liberty is going to work with me really well on how to balance my schedule.”

Does winning at Kansas, Texas, Kentucky and Pocono give you confidence heading into Michigan?
“We’ve definitely had a lot of speed on these types of race tracks. This will be William’s first time at Michigan, so we have to make sure that we attack it the right way and have a plan in place for practice that will allow him to learn how to draft there. We need to have the right strategy in place to come out of Michigan with a solid finish and hopefully if everything works out, we can get him another win.”

Fugle has two top-five finishes as a crew chief in two starts at Michigan in the Truck Series. Kyle Busch was second in 2013 and Erik Jones took third place in 2015. Fugle’s Tundras have led 49 laps at the two-mile oval.