It’s All About the Air in Charlotte 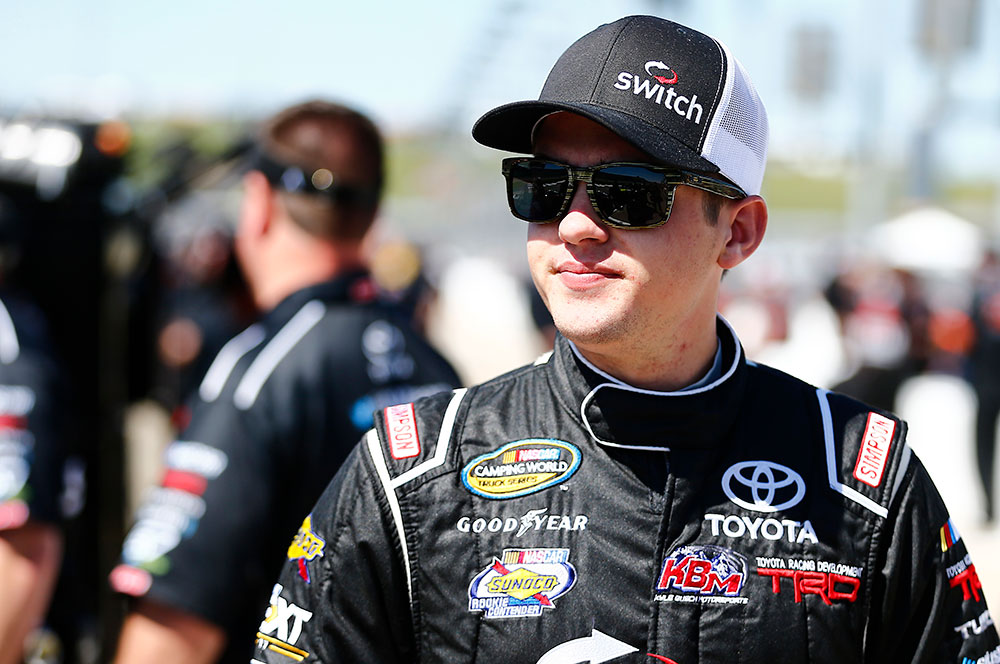 MOORESVILLE, N.C. (May 16, 2017) – There are many factors which go into winning a race. Having a truck which handles well, an engine with the best horsepower, learning the fastest way around the track and a little luck goes a long way. Not only does a driver need all of these things, but the benefit of clean air as well. Not air without pollen, or smog, but aerodynamics – getting your truck out front where the aerodynamics of other trucks won’t affect your handling. The air is something rookie Noah Gragson is still learning about at every intermediate track, including this weekend at Charlotte (N.C.) Motor Speedway.

The Las Vegas native’s only previous racing experience at Charlotte is in a Legend’s car where aerodynamics did not play a role on such a small track and slower speeds. Luckily, Gragson was able to test his No. 18 Switch Tundra earlier this month on the 1.5-mile oval to get a feel for it. Although it took some time for him to figure out turns one and two, by the end of the night his lap times were similar to his Kyle Busch Motorsports’ (KBM) teammates Christopher Bell and Busch himself.

Returning to Charlotte for the North Carolina Education Lottery 200 will be very different from the test. Instead of doing single-truck runs, the 134-lap race will have 32 trucks on the track fighting for position which stirs up a lot of dirty air. While the terms side draft and downforce may sound like something from a college engineering class, they do play a huge role in every race on bigger tracks and getting the feel of it takes time for a young driver moving up into a new series.

Gragson can take what he has learned so far at Atlanta Motor Speedway and Kansas Speedway to help him get through traffic on Friday night. Much like any sport, the more experience you have the better you will get. Finding the clean air will be one of the keys to success.

What did you learn testing at Charlotte earlier this month?

“It’s a lot different in real life than anything I’ve ever done on video games or iRacing. It looks a lot like Atlanta, but the surface has a lot more grip. Charlotte is really fast. I started out the test not knowing how to get through turns one and two, but I was really good in turns three and four. Eventually I gained my confidence through turns one and two and really got a handle on the track. I felt like we were one of the better trucks there along with Kyle (Busch) and Christopher (Bell). It was really productive, solid test. Now I’m ready to get back there and see how we stack up to the competition.”

Coming off an intermediate race at Kansas last weekend, are there similarities between the two tracks?

Is there added pressure at Charlotte since it’s considered a “home track” for so many crew members?

“There is a lot of pressure to succeed, one being that I’m driving for Kyle Busch Motorsports and they have had a lot of success at Charlotte. Kyle and Christopher will be really good there, so I just want to go out with full confidence and do my best. I know if I do my best then the results will be there and we’ll have a solid finish.”

What type of things did you work on at the Charlotte test earlier this month?

What will be the biggest challenge for Noah at Charlotte?

“The biggest challenge for Noah is still be learning the aerodynamics at these intermediate tracks. He’s got running by himself figured out, but we just have to work on him having confidence in the truck in dirty air.”

KBM-042: The No. 18 Switch team will race KBM-042, for Friday’s North Carolina Education Lottery at Charlotte Motor Speedway. This Tundra was built in 2016 and raced once by Christopher Bell in the season finale at Homestead where he finished eighth.

Richmond has four top-five and seven top-10 finishes as a NCWTS crew chief at Charlotte. His best finish was third with Johnny Sauter in 2016 and Cole Whitt in 2011.