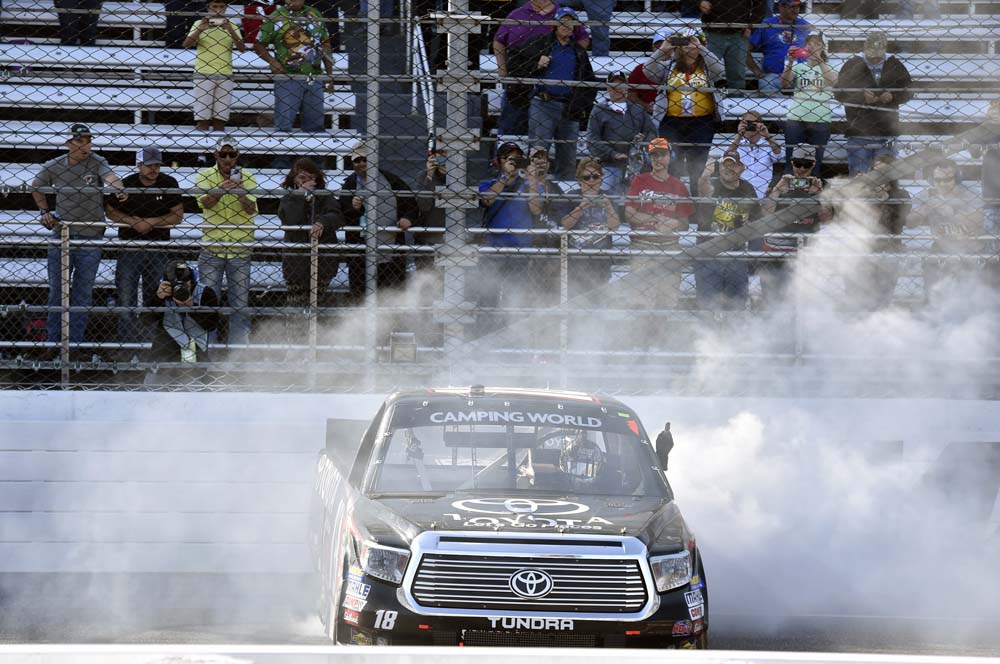 It took Kyle Busch 31 starts across NASCAR’s top three divisions to collect one of the sport’s most coveted trophies, but the talented wheelman finally checked out of Martinsville (Va.) Speedway with a grandfather clock. Busch led four times for a race-high 123 laps, including the final 93, and held the top spot across several restarts in the closing laps to pick up the overtime victory in Saturday’s Alpha Energy Solutions 250 at the challenging .526-mile oval.

With a set of stickers remaining in the pits, Busch and crew chief Wes Ward had planned on pitting around the lap-200 mark, after stopping on lap 135, but as the race played the duo elected to keep track position and made the same set of Goodyear tires last the final 120 laps.

“Wes (Ward, crew chief) and I we both leaned on each other and we both had no idea, so we just dumbed into this I think, but it all worked out, so this Toyota Tundra was awesome. All the guys at KBM (Kyle Busch Motorsports), KBM chassis, NOS, TRD (Toyota Racing Development), Joe Gibbs Racing Engines – appreciate them – Camping World of course, the fans – it’s neat to win here at Martinsville. I love when they do it up here on the front stretch for everyone to be up close and personal.

We had some pretty good turn through the center of the corner, but we had really good launch up off the corner and we fought that a little bit actually earlier in the race. That’s why those were better than us early on, but the couple adjustments that Wes (Ward, crew chief) made on pit road were really good for us. This Tundra was awesome, so again I just can’t say enough about everyone KBM (Kyle Busch Motorsports). This is a fourth effort. It’s hard for us to get this thing to come out here. It’s obviously a great opportunity for me and for the team to continue to showcase we’ve got great stuff and that it’s a matter of time before William (Byron) and Christopher (Bell) will be in victory lane too, so good run for the Liberty University Tundra. The JBL truck I saw had trouble. ARRIS truck I think had trouble and looking forward to seeing the JEGS truck back on the track next race.”

The second race of the 2016 season featured 11 cautions for a total of 68 laps. There were eight lead changes among four drivers, including Busch who led four times for a race-high 123 laps.