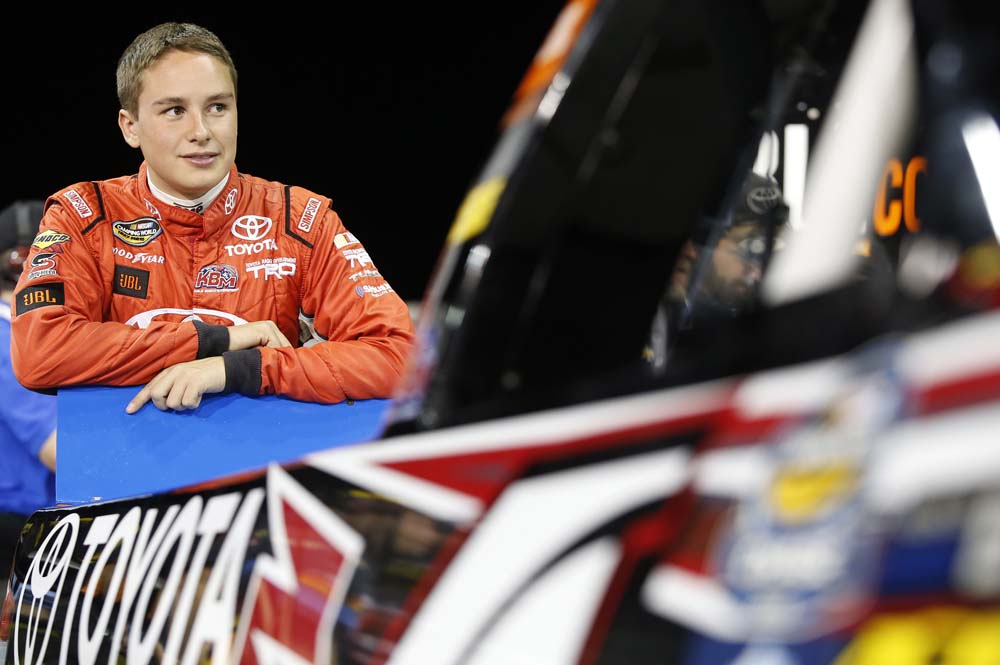 MOORESVILLE, N.C. (Nov. 15, 2016) -Sunoco Rookie of the Year contender Christopher Bell will take on three of the series’ stalwarts Friday night in the Championship 4 of the inaugural NASCAR Camping World Truck Series Chase at Homestead (Fla.) Miami Speedway. The 21-year-old’s three opponents in Friday night’s 134-lap event boast an average age of 38 and have combined for a total of 809 starts in NASCAR’s third division, including 33 at Homestead. Bell will be getting behind the wheel of his JBL Tundra for just the 30th time overall and the second time for a race at the 1.5-mile venue.

Bell’s rookie campaign got off to a bumpy start as he posted an average finish of 20.3 across the first three races of 2016, despite being in a position to win in the closing laps of two of those events. From that point forward, the Oklahoma native has made a concentrated effort on not taking himself out of contention before the completion of the race and the results have showed as he’s recorded an average finish of 7.8 over the last 19 events and had just three results outside of the top 10.

The talented youngster earned his spot in the inaugural Truck Series Chase after leading 38 of the final 42 laps in the ninth race of the season at Gateway Motorsports Park in Madison, Ill. Once the Chase got underway, Bell was able to advance into the Championship 4 by running consistently inside the top 10. In the Round of 8, he recorded an average finish of 4.5 and followed it up in the Round of 6 with an average finish of 7.3. Overall since the playoffs have started, the Oklahoma native ranks second to Johnny Sauter with a driver rating of 103.7 and average running position of 7.4.

Now the No. 4 JBL Racing team heads to Homestead-Miami Speedway, a track where Bell has only made one start, but where crew chief Jerry Baxter has been very successful. As part of his seven-race schedule last season, the open-wheel dirt standout led five laps and was running inside the top 10 until a gamble on fuel late in the race left him with a 25th-place finish. Baxter has called the shots for four Truck Series races at the 1.5-mile venue in South Florida and ended up in victory lane twice. In 2012, he was victorious when Cale Gale narrowly beat KBM owner-driver Kyle Busch to the stripe in a green-white-checkered finish. He won again in 2014 when Darrell Wallace Jr., led 30 laps and outdueled Kyle Larson in the closing laps.

KBM prepared for the possibility of having at least one of their rookie drivers in the Championship 4 using one of their rookie tests at Homestead-Miami Speedway in August. Bell was able to make over 100 laps around the progressively-banked track in preparation for Friday night’s Truck Series finale. Although rain washed away a good portion of the track time they had planned on, including both night sessions, the No. 4 team was able to use the time to narrow in on the setup that they will unload with when practice starts on Friday.

Bell, Baxter and the No. 4 JBL Racing team have put in countless hours this season in an effort to be ready for Friday night’s one-race showdown. The ultra-talented youngster will have to be at the top of his game if he hopes to outduel three cagey veterans, but he is hoping when the checkered flag waves on the 2016 season that youth will prevail in the inaugural Truck Series Chase and he’ll have delivered KBM its second-consecutive driver’s title.

Did you expect to be one of the four drivers competing for the championship this year?
“It’s been kind of a whirlwind year. After doing my seven races last year and knowing that I was going to be back at Kyle Busch Motorsports this year, I foresaw myself being able to compete for this championship. Then after the way the season started out with making so many mistakes, I kind of ruled out racing for a championship and just focused on racing for wins and learning as much as I could. Thankfully with the new Chase format we were able to hit our stride at the right part of the season and now here we are headed to Homestead with as good a shot as anybody to be the Truck Series champions.”

How did you go about turning your season around after making mistakes early in the season?
“Kyle sat me down — I think it was towards the end of May — and said to me ‘you have fast trucks, you are a talented driver and the wins will come, you don’t have to make it happen.’ That was probably the best advice I’ve ever been given. Just let it come natural — don’t try and force the issue. Once I got that in my head and I realized that I do have fast trucks and if I don’t eliminate myself, typically we are right in the hunt at the end of races.”

Do you feel like you’re at a disadvantage racing against three veterans for the championship?
“Racing against three veterans that have made a bunch of laps at Homestead is going to be a tough battle — nothing can replace that experience. I feel like where I have the advantage is that I’m driving for Kyle Busch Motorsports. They are so competitive and have their stuff together and week in and week out when I show up to the track I know that I’ll have a Tundra that is capable of winning. I’ve only won once this year, so I need to keep piecing that puzzle together — but there’s no better place to start than this weekend at Homestead.”

What would it mean to win the Truck Series championship?
“It would be a huge confidence booster for me personally and I’d be really proud to be able to bring another driver championship to Kyle Busch Motorsports and to also reward everyone at Toyota and TRD (Toyota Racing Development) for believing in me. Being a NASCAR champion is something I’ve dreamed about since I was a kid and I don’t think it has sunk in yet that I’m in contention to make that dream come true.”

Jerry Baxter, crew chief of the No. 4 JBL Toyota Tundra:

What is your outlook heading into Friday’s championship race?
“Personally I’m pretty pumped up for Friday night. I’ve been able to get to victory lane at Homestead in two of the last four seasons and last year we were leading until Daniel (Suarez) had a mishap. So, it’s a good feeling knowing that we always run good there. We went and tested at Homestead in August, which is important because we only have one set of tires for practice this week. So, we used the test to narrow down our setups to the package that we will unload with on Friday and then we can just tune on it from there and adjust to the track, instead of having to make a bunch of changes during practice on Friday to figure out what we want to run. That’s really valuable with how important tires are at Homestead.”

What would it mean to win the Truck Series championship?
“I’ve worked with a lot of talented young drivers over the years, but we haven’t been able to win a championship. So, it would be really cool to go out on Friday night and bring this championship home and be able to say we were the first team to win a Truck Series Chase. Christopher and I have been working hard to make sure we are doing everything we can to be prepared — we’ve watched old race tapes, talked to Kyle and we’re going to the simulator later this week. I know that we have the team and driver that can get the job done, now we just need to go out and execute.”

The Book on Baxter:
Veteran crew chief Jerry Baxter is in his fourth season atop the pit box for KBM. Since joining KBM, Baxter’s drivers have posted eight wins, three poles, 1368 laps led, 33 top-five and 56 top-10 finishes across 89 starts. The California native spent the 2015 season calling the shots for KBM’s No. 51 team, which collected two wins, 10 top-five and 14 top-10 finishes with drivers Daniel Suarez (12 starts), Matt Tifft (six starts), Kyle Busch (three starts), and Christopher Bell (one start) behind the wheel. In addition to his eight wins at KBM, he boasts one other Truck Series win (Cale Gale, 2012) and one NASCAR XFINITY Series win (David Reutimann, 2007).

Baxter’s Truck Series drivers have collected two wins and an average finish of 11.8 across four starts in South Florida. He collected his first Truck Series victory atop the pit box in the 2012 event when Cale Gale edged out KBM owner-driver Kyle Busch at the stripe and also called the shots for Darrell Wallace Jr.’s victory in the 2014 season finale.