Hoping the Third Time is the Charm 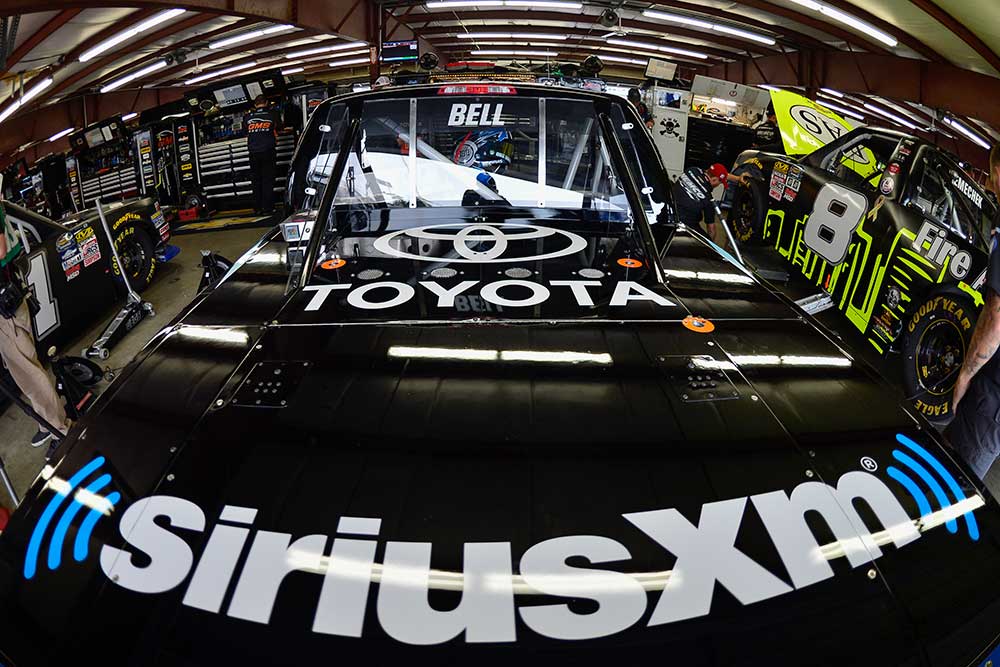 MOORESVILLE, N.C. (Oct. 18, 2016) – With two races of superspeedway racing experience under his belt, Christopher Bell heads to Talladega (Ala.) Superspeedway for Saturday’s fred’s 250 looking to checkout of the Alabama track with his first restrictor-plate victory.

Last year in just the fifth start of his NASCAR Camping World Truck Series career, and first at a superspeedway, Bell proved to be a quick learner of the intricacies of restrictor-plate racing as he spent 91 of the 98 laps inside the top 15. Experiencing the aerodynamics of the draft for the first time, the open-wheel dirt standout started from the 10th spot, recorded an average running position of 9.7 and in the closing laps had maneuvered his way into the top five.

The Oklahoma native was scored in the fourth position for a restart with just four laps remaining. He got a strong restart and helped push Brandon Jones to the lead, but NASCAR ruled that he “engaged” the bumper of Jones’ truck and issued a pass-through penalty. Just before he was going to serve his penalty, a multi-truck wreck brought out the caution, which forced him to restart in the 15th position, at the tail end of the field, for the green-white-checkered finish. Before the race ended under caution, the rookie driver was able to pick up two positions and left his superspeedway debut with a respectable 13th-place finish.

Bell’s second superspeedway start came in the 2016 Truck Series season-opening event at Daytona (Fla.) International Speedway. Once again the talented youngster showed great poise and was positioned within striking distance for the win in the closing laps. After narrowly escaping the first “big one” with eight laps remaining, the No. 4 Tundra lined up in the fourth spot for NASCAR overtime. He helped “bump draft” Johnny Sauter to the lead and was scored in the second spot when the field took the white flag. Unfortunately, mayhem ensued shortly after and Bell’s JBL Toyota ended up upside down at the entrance to Turn 1 after experiencing double-digit flips end-over-end. When lineup was sorted and the official results were posted, he was credited with an 11th-place finish.

The 21-year-old Rookie of the Year candidate comes into the final race of the Round of 8 in the inaugural Truck Series Chase sitting second in the point standings after posting top-10 finishes in each of the first two events. Another top-10 finish on Saturday will earn him a spot in the Round of 6, but Bell is hoping that his third time racing on a superspeedway will be the charm and he locks himself into the next round with a victory.

Now that you have two superspeedway races under your belt do you feel like you have a handle on that style of racing?
“I feel like I’m starting to learn the ropes of superspeedway racing a little bit. I’ve had two really good runs, at Talladega last year and Daytona this year, where at the end of the race I’ve been competing for the win. Last year at Talladega we were up front at the end of the race until our penalty and then this year at Daytona we were also in a position for the win on the last restart but unfortunately got caught up in a big wreck. Having fast trucks makes everything on my end a lot easier and I know that Jerry (Baxter, crew chief) and the guys are going to bring me a fast SiriusXM Tundra this weekend.”

Have you talked to Jerry about what the game plan is going to be for Saturday’s race?
“I’m glad I’m not in Jerry’s position because once the green flag drops on Saturday he’s going to have a stressful job. We’ve sat down and talked about it — Jerry’s asked me what my opinion is, I’ve asked Jerry what his opinion is, and the best plan that we’ve figured out is to just go out there and race our race. If we end up getting caught up in a crash while running near the front, more than likely there are going to be other Chase drivers involved. So I don’t think we are going to deviate any from if this was any other race, we are just going to go out and do our job and however it plays out, it plays out.”

Your team is second in the point standings heading into Talladega, how will that affect your strategy?
“Christopher and I have talked about it a little bit and we’ll continue to talk once we get to the track. Obviously where you end up qualifying will play a role in your strategy early in the race, but my gut feeling is that we just need to go out there and race our race and whatever comes of it, comes of it. I’m pretty sure that if we can stay near the front of the field then if something happens to us it is going to collect other guys that are in the Chase as well and with us being second in the points going into this weekend then we should still be in good shape for advancing.”

How closely will you pay attention to the point standings and the cutoff line as they change throughout the race?
“We’ll definitely pay attention to where all the Chase guys are running, in particular the 8 and 19 trucks. They are sort of the wild cards based on the standings right now and if they are running up front late in the race and it looks like they might be able to get the win, then it really changes where the cutoff line is going to be and you might have to get a little more aggressive. The best scenario for us would be for something to happen to a couple of the Chase guys behind us early in the race and then we would know that we are advancing and we can go back to concentrating on trying to get a win and not points racing.”

Christopher Bell’s No. 4 SiriusXM Tundra:
KBM-40 The No. 4 SiriusXM Racing team will unload a brand new chassis, KBM-40, for Saturday’s fred’s 250 at Talladega (Ala.) Superspeedway.

The Book on Baxter:
Veteran crew chief Jerry Baxter is in his fourth season atop the pit box for KBM. Since joining KBM, Baxter’s drivers have posted eight wins, three poles, 1368 laps led, 32 top-five and 53 top-10 finishes across 85 starts. The California native spent the 2015 season calling the shots for KBM’s No. 51 team, which collected two wins, 10 top-five and 14 top-10 finishes with drivers Daniel Suarez (12 starts), Matt Tifft (six starts), Kyle Busch (three starts), and Christopher Bell (one start) behind the wheel. In addition to his eight wins at KBM, he boasts one other Truck Series win (Cale Gale, 2012) and one NASCAR XFINITY Series win (David Reutimann, 2007).