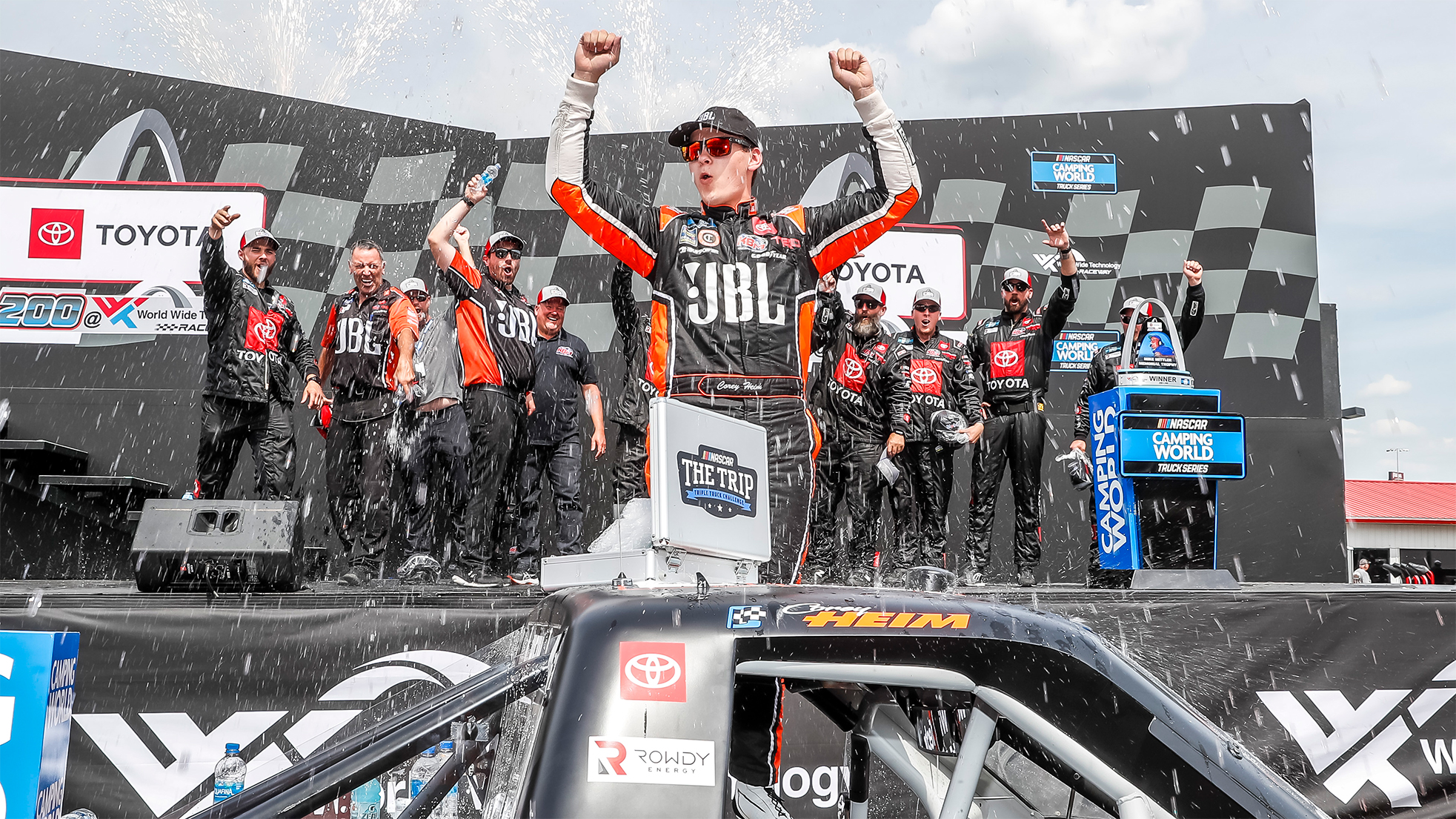 Corey Heim earned his second career NASCAR Camping World Truck Series win in just his ninth start in Saturday’s Toyota 200 at World Wide Technology Raceway at Gateway. The win came with a $50,000 bonus in the Triple Truck Challenge and has a change to win up to $500,000 if he can win the final two races of the challenge.

Heim earned his first career Cometic Gasket Pole Award in Friday’s one-lap qualifying session and led twice for 20 laps in the race. He earned an additional 12 stage points for the No. 51 team after finishing second and eighth in the opening two stages. With just three laps remaining in the scheduled 165-lap event, Heim was running in third when the caution flag came out, setting up NASCAR Overtime.

The talented teenager lined up on the inside of the front row for the ensuing restart when the first two competitors elected to take the top lane. Heim got a good jump on the restart and battled his Kyle Busch Motorsports (KBM) teammate Chandler Smith into Turn 1 before clearing him on the exit of Turn 2. Heim drove away from the field as the caution flag came out after he took the white flag, declaring him the winner.

How would you sum up today’s race?

“For the rest of this year, I’ve found myself in bad spots and really just not been able to finish races so today really helped my mindset of just finishing, being there in the end and just keeping my truck clean. I felt like out of the whole entire top-10, everyone had damage except for me. It was great for a situation in the end, where we could win the race. Everyone at KBM (Kyle Busch Motorsports) and JBL, this Tundra TRD Pro was just phenomenal today. Like I said, just staying up front, staying out of trouble.”

“It’s phenomenal. I’ve been here once before and there was nowhere near the good turn out as there was today. It was phenomenal to see all of these fans today at the Toyota 200. It was a great show.”

Can you talk about your run?

“It was a great day. I just tried to stay out front and stay out of trouble for the most part. I’ve had my ups and downs this year where I’ve kind of been a little too aggressive and it came back to bite me. I was just trying to stay up front and keep my truck clean in the end and it all paid off. My Tundra TRD Pro was phenomenal. KBM (Kyle Busch Motorsports) did a great job and I’m proud to be a part of this Toyota 200.”

With the win, the No. 51 team jumped up one spot in the Owner’s Championship standings to eighth. They now sit 65 points behind the No. 99 ThorSport Racing team in first.

Owner-driver Kyle Busch will be back behind the wheel of the No. 51 Yahoo! Tundra TRD Pro for his fifth and final start of 2022 next week as Camping World Truck Series action heads to Sonoma (Cali.) Raceway. Live coverage of the DoorDash 250 will be on FS1, Motor Racing Network and SiriusXM at 7:30 p.m. ET.