Gragson Puts Daytona in the Rear-View Mirror Headed to Atlanta 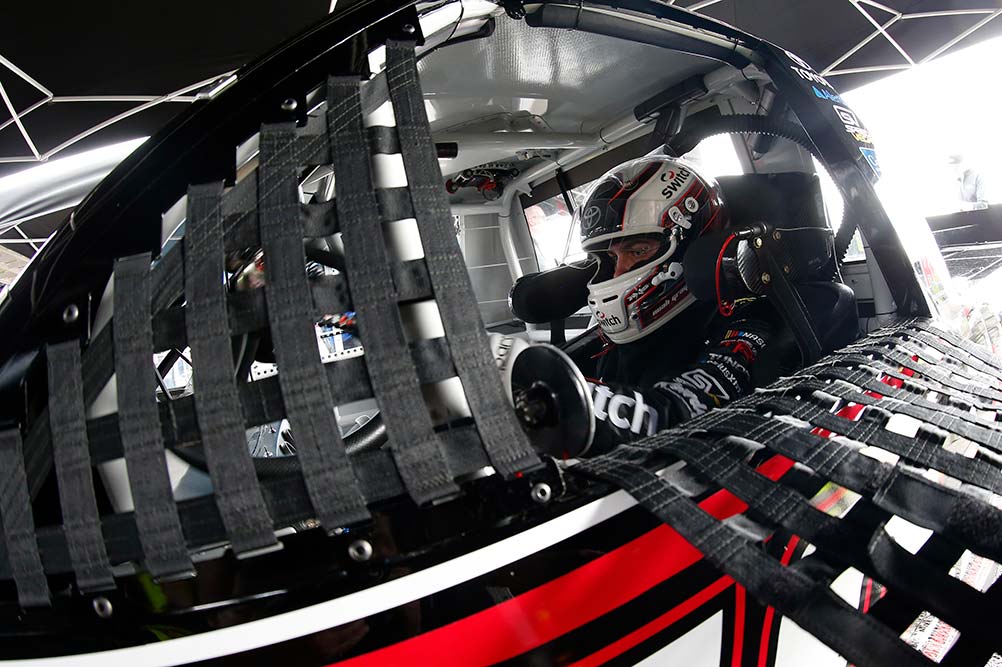 MOORESVILLE, N.C. (Feb. 28, 2017) – Noah Gragson has been looking forward to racing at Atlanta (Ga.) Motor Speedway ever since last Friday night when he was taken out of contention after only one lap at Daytona (Fla.) International Speedway. By the time he changed out of his Switch firesuit, he was already looking ahead to the next race and a shot at redemption.

Through no fault of his own, the 18-year-old rookie was one of the many drivers caught up in a multi-truck accident at Daytona last Friday. He was hit from behind and spun down the track on only the second lap of the race. Although his Switch Tundra was damaged beyond repair, Gragson’s motivation was not. He was already focused on his next challenge, the first intermediate-track race of the season at Atlanta.

Gragson was able to spend a day testing at the 1.54-mile oval in January. It was scheduled to be a two-day test, but Mother Nature had other plans when rain washed out the first day. He wasted no time learning as much as he could on the second day, running from morning until evening. It was also the first chance Gragson had to bond with his new crew chief, Marcus Richmond and his Kyle Busch Motorsports (KBM) team. From understanding how to communicate with each other, to getting the feel of how quickly the tires wear on the old track surface, Gragson made the most of his day at Atlanta.

With three practice sessions for the NASCAR Camping World Truck Series (NCWTS) on Friday, Gragson will have plenty of time to practice what he learned at the test and seek additional advice from his owner, and this weekend a fellow competitor, Kyle Busch. While Busch may not share all of his winning secrets with Gragson, he will be a valuable resource to help the rookie driver understand the characteristics of the track. Busch has four wins in the Truck Series at Atlanta, but none of them were in a KBM Tundra. Atlanta is the only track on the NCWTS schedule where a KBM team has not visited Victory Lane at least once.

A solid run at Atlanta on Saturday would definitely help Gragson put the Daytona race in the rear-view mirror. With a month break in the NCWTS schedule following Atlanta, it would also keep his confidence level up while waiting for his next chance to compete in his No. 18 Switch Tundra at Martinsville (Va.) Speedway.

What did you learn when you tested Atlanta?

“The test in Atlanta was very productive. I got to know my crew chief Marcus (Richmond) and my team so we could work on our communication. I learned a lot about the racetrack itself. It’s really worn out. From our first run to our last run, we made tremendous gains. Learning the track, how to get around there and saving tires while keeping my momentum was the hardest thing for me to learn, but by the end of the night I had a pretty good feel for it.”

Are you looking forward to racing against your boss, Kyle Busch?

“I’ve actually raced against Kyle twice before in Super Late Models and I’m one for two. I finished ahead of him my first time racing against him at Watermelon Capital Speedway in Cordele (Ga.) in 2015. I didn’t know Kyle at all then, but I finished fourth in that race ahead of him. Then I just raced against him about a month ago at Kern County in Bakersfield (Ca.) and he outran me that time. I talked to him quite a bit there and tried to learn from him even though I’ve been there five, or six times and it was his first time there. He’s always good for advice.”

What advice has Kyle given you about racing at Atlanta?

“I texted Kyle after the test and told him what I thought about how everything went, our changes we made, the track and all my notes. He said I was pretty spot on about the track and the bumps and what it should feel like. Restarts are going to be critical, so I practiced those when it was really slick on old, hot, greasy tires and it was really hard. Watching on tv I thought those guys weren’t very good until I actually tried it at the test and I respect them so much more now! I’m sure I’ll be asking Kyle more questions once we get to the track and get some practice time.”

What did you work on at the Atlanta test which will help Noah this weekend?

“The biggest thing we worked on was the tire fall-off and him knowing what to do when the tires fall off. Noah has a lot of speed and he doesn’t mind holding it wide open, so the biggest thing is just to be there at the end. Since the race ends in the dark, the track will change a lot throughout the day. When we start the race in the late afternoon it’s going to start cooling down and the track is probably going to get freer.”

How tough is it to put last week’s race behind you and look ahead to Atlanta?

“The finish at Daytona last week was tough since it’s always in the back of your mind, but I think having tested at Atlanta will help Noah a lot. He’s surrounded by Kyle (Busch) and everyone on the team supporting him and helping his confidence. You definitely need a lot of confidence going into a place like Atlanta, and just put Daytona behind you.”

KBM-042: The No. 18 Switch team will race KBM-042, for Saturday’s Active Pest Control 200 at Atlanta Motor Speedway. Christopher Bell raced this Tundra at Homestead last fall where he finished eighth.

Marcus Richmond has collected nine wins, 11 poles, 52 top-five and 107 top-10 finishes across 222 races in his 11 seasons as a crew chief in the Truck Series. The veteran crew chief has been to victory lane with five different drivers (Ty Dillon, Kevin Harvick, Timothy Peters, Johnny Sauter and Dennis Setzer) and has recorded at least one win every year since 2012. The North Carolina native’s drivers have finished inside the top five in the Truck Series championship standings four times in the last five seasons, including a runner-up finish in the standings with Ty Dillon in 2012. His most recent stop was at JR Motorsports last season, where he guided Cole Custer to two poles, four top-five and 12 top-10 finishes over the last 16 races of 2016. Richmond joined KBM in December 2016 to coach rookie Noah Gragson in 2017.

Richmond has one win at Atlanta as a crew chief in the NCWTS. He claimed the victory from the pole in 2012 with driver Ty Dillon.