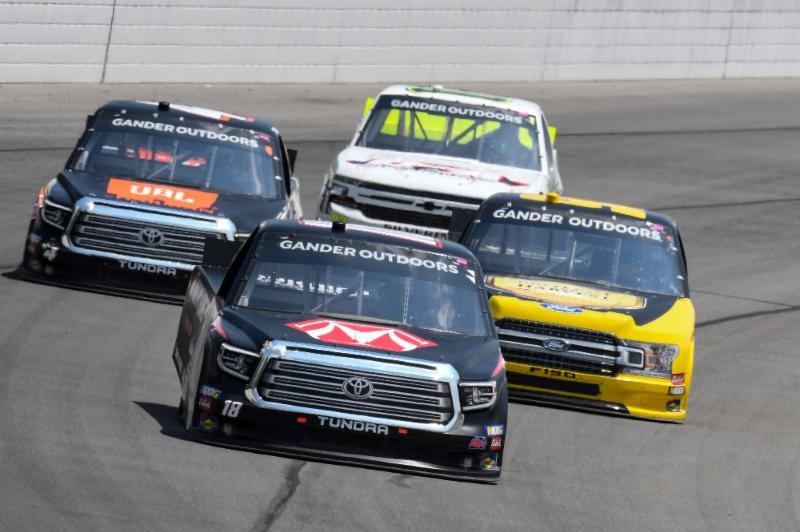 Harrison Burton put together another solid outing in Saturday’s Gander RV 150 at Pocono Raceway, leading six laps, winning Stage Two and ending the day by equaling a career-best third-place finish. It was the sixth time across 29 career starts and the fourth time this season that the 18-year-old driver came home with a third-place finish and the fifth top-five finish over his last six Gander Trucks series starts.

Burton was able to maintain fifth in the driver point standings and with playoff contender Stewart Friesen wrecking on the first lap and finishing last, the driver of the No. 18 Toyota was able to move to within 13 points of Friesen for the eighth and final playoff spot with just two races remaining.

Harrison Burton, driver of the No. 18 Morton Buildings Tundra for Kyle Busch Motorsports:

“We had a really good Morton Buildings Tundra. We were really, really fast. It was fun. We had to charge through the field there. We started ninth on the last restart and just had to go. I just ran out of time there in the end. It’s frustrating. There are guys that had good strategy. We were cutting it close on fuel. I knew they were riding around there a little bit. I thought maybe I could get to them, so I was driving as hard as I could there at the end, but it just didn’t come our way.”

Burton maintained the fifth spot in the Gander Trucks driver point standings. After 14 races he finds himself 82 tallies behind points leader Grant Enfinger. He currently sits ninth on the playoff grid, 13 points behind Stewart Friesen for the eighth and final spot in the playoffs with two regular season races remaining.

Burton will be back behind the wheel of the No. 18 Safelite AutoGlass Tundra when the NASCAR Gander Outdoors Truck Series resumes action Aug. 1 at Eldora Speedway in Rossburg, Ohio. Live coverage of the Eldora Dirt Derby begins Thursday at 9 p.m. ET on FS1.