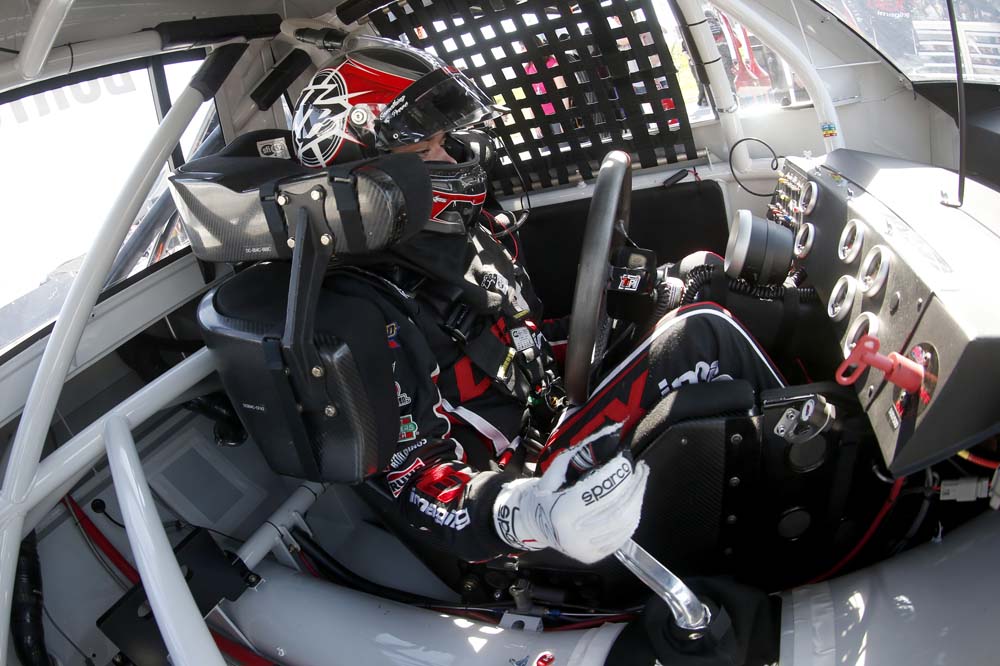 MOORESVILLE, N.C. (Nov. 14, 2018) – Kyle Busch Motorsports (KBM) announced today that Safelite® AutoGlass will return to the organization in 2019 as a primary sponsor for 19 races on Harrison Burton’s No. 18 Tundra during his first full-time season in the NASCAR Gander Outdoors Truck Series (NGOTS). The nation’s largest provider of vehicle glass repair and replacement services joined KBM in 2018 as the primary sponsor for championship contender Noah Gragson and also has served as an associate sponsor for Burton’s limited Truck Series schedule this season.

Burton, the son of former Monster Energy NASCAR Cup Series driver and current NASCAR on NBC analyst Jeff Burton, is currently in his third season driving a limited schedule for KBM. The talented teenager has recorded one pole, 76 laps led, three top-five and seven top-10 finishes across 14 starts since making his Truck Series debut for KBM at Martinsville (Va.) Speedway shortly after turning 16 in October of 2016.

The NASCAR Next alumnus has posted solid numbers across his first seven NASCAR Camping World Truck Series (NCWTS) starts in 2018, collecting his first Truck Series pole and leading 30 laps at Iowa Speedway in Newton in June, while overall posting three top-five and six top-10 finishes resulting in an average finish of 6.6. He led a race-high 46 laps and equaled his career-best finish by finishing third in his most recent start at ISM Raceway in Avondale, Ariz., Nov. 9 and will finish out the season this Friday at Homestead-Miami (Fla.) Speedway.

“I’ve worked really hard the last few seasons driving a limited schedule for KBM to prove that I’m capable of running full-time in the NASCAR Gander Outdoors Truck Series in 2019 and I’m excited for the opportunity to do so with Safelite AutoGlass as my primary sponsor,” Burton said. “By using all of the resources that I have available at KBM, with the support of Toyota and Toyota Racing Development, I know that I’ll continue to improve as a driver and I’m confident that I’m capable of competing for wins and being a legitimate contender for the Truck Series championship next year. Obviously, to get to this point in my career it has taken a lot of support from a lot of different people, so I can’t thank my parents enough as well as companies like DEX Imaging, Hunt Brothers Pizza, Morton Buildings, RUUD and FIELDS for being great partners.”

“Harrison has done a great job of balancing being a high school student, as well as a student of racing since making his first Truck Series start for KBM shortly after turning 16 a few years ago,” team owner Kyle Busch said. “The results of his hard work are starting to pay dividends and we’re confident that his first Truck Series win will be coming shortly and he’ll be able to be in the mix for the championship next year.

“The support that Safelite provides our team by bringing their employees and business partners to the races is amazing to see, but even more rewarding is the chance for our organization to be a part of the efforts they make in giving back to the communities where we race. We know that Harrison will be a great representative for them on and off the track.”

“We are very excited for the 2019 season with Harrison Burton behind the wheel of the Safelite AutoGlass Toyota Tundra,” Garth Beck, Senior Vice President Safelite AutoGlass West Region said. “He is a very talented young driver with many accomplishments at a young age and will be a great fit for Safelite.  We are looking forward to another great year in partnership with KBM and Harrison for the 2019 season.”

In addition to his Truck Series schedule, Burton has run limited schedules in the ARCA Racing Series, NASCAR K&N Pro Series East and Super Late Models this year. He posted one win, five top-five and eight top-10 finishes resulting in an average finish of 6.1 across nine ARCA Racing Series starts this season. He produced two poles, four top-five and five-top top-10 finishes for an average finish of 4.2 across five NASCAR K&N Pro Series East races this season. He has also recorded four Super Late Model victories this season, including the prestigious Rattler 250 at South Alabama Speedway in Kinston, Ala.

Burton captured the 2017 NASCAR K&N Pro Series East title after registering a series-high five wins, two poles, 142 laps led, 12 top-five and 14 top-10 finishes and an average finish of 3.3 across the series’ 14 events. In addition to his five K&N victories, the North Carolina native has collected two ARCA Racing Series and numerous Super Late Model victories including marquee events including the Rattler 250 at South Alabama Speedway in Kinston, Ala., in 2018 and the ARCA/CRA SpeedFest at Crisp Motorsports Park in Cordele, Ga., in 2017.

Safelite AutoGlass is currently in their first season as a primary sponsor at KBM and third overall in the Truck Series. Noah Gragson will be looking to deliver the Ohio-based company their first-ever NASCAR championship this Friday, Nov. 16, at Homestead-Miami (Fla.) Speedway.

Announcements on who will serve as Burton’s crew chief as well as further sponsorship announcements for the remainder of Burton’s 2019 schedule are forthcoming.

Safelite AutoGlass is a member of the Safelite® Group family of brands, which together, make a difference in the lives of over 10 million customers annually. This leading service organization, founded in 1947, is reaching record-growth thanks to its People Powered, Customer Driven strategy. The Columbus, Ohio-based company employs over 14,000 people across the United States.