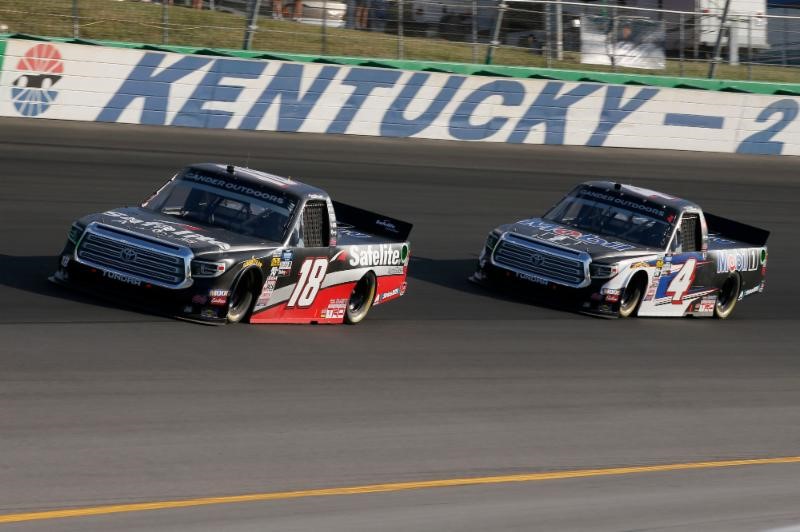 After sustaining minor fender damage from a mid-race spin, Harrison Burton was able to battle his way back to a third-place finish in Thursday’s Buckle Up In Your Truck 225 at Kentucky Speedway. While racing hard for a position within the top five on a restart just short of the halfway mark of the 150-lap race, Burton found himself  three-wide in the middle, got aero loose and ended up spinning down the track in front of the field. Fortunately, he was able to get the path of his Safelite AutoGlass Tundra corrected quickly and miraculously escaped with just minor fender damage.

After getting four fresh tires and cosmetic repairs, Burton would finish 13th in Stage Two. With his Toyota already having fresh tires and not having to pit between stages, the 18-year old driver would line up fourth when the Final Stage went green on lap 76. The rookie remained inside the top five for the majority of the race and would bring his Toyota home in the third spot. The third-place result equaled his career-best finish, which he has achieved three times in 2019 and five times overall in his young career.

Burton was able to move up one spot to fifth in the driver point standings and late in the race it appeared that he would move above the cutoff line for the playoffs, but Brett Moffit ran out of fuel with two laps remaining which allowed Tyler Ankrum to collect the victory and a spot in the playoffs. With three races remaining in the regular season, the No. 18 team sits ninth on the playoff grid, 44 points behind Matt Crafton for the eighth and final spot.

How important was it for you to rebound and get a third-place tonight?

“Our goal coming in was to get in front of the 99 (Ben Rhodes) in points and we did that and then the 17 (Tyler Ankrum) won, so now we’re still out of the playoffs. Excited for the opportunity to go and have to win. That’s going to be fun. I like that pressure. I like being up against the wall. I would rather not be, right. But it’s going to be fun going into the next few races with that mentality, that mindset to have to just go and win and that’s all you can do. We’re going to be going all out for it and I know my Safelite AutoGlass Toyota Tundra guys are going to get dialed in.”

Burton moved up one spot to fifth in the Gander Trucks driver point standings. After 13 races he finds himself 94 tallies behind points leader Grant Enfinger. He currently sits ninth on the playoff grid, 44 points behind Matt Crafton for the eighth and final spot in the playoffs with three regular season races remaining.

Burton will be back behind the wheel of the No. 18 Morton Buildings Tundra when the NASCAR Gander Outdoors Truck Series resumes action July 27 at Pocono Raceway in Long Pond, Pa. Live coverage of the Gander RV 150 begins Saturday at 1 p.m. ET on FS1.