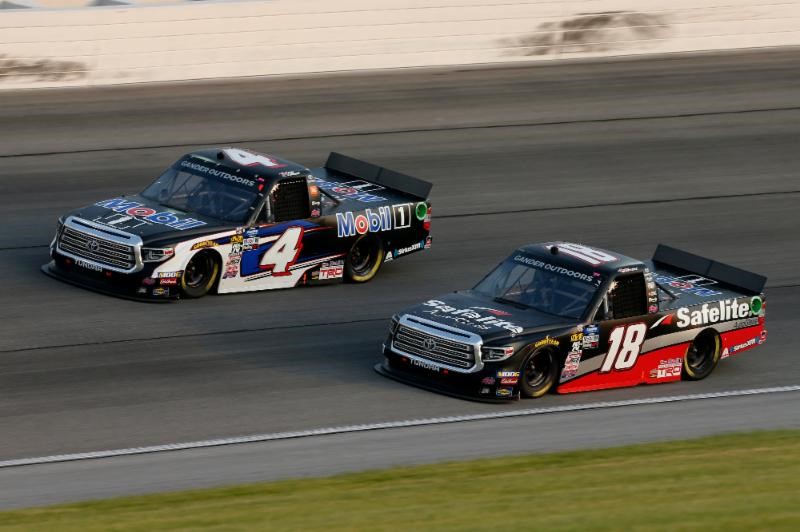 Harrison Burton continued his strong charge towards the end of the NASCAR Gander Truck Series regular season by registering his third top-five finish across his last four races. Burton started from the eighth position for his first career Gander Trucks start at Chicagoland Speedway and went on to finish Stage One in the sixth spot and then crossed the stripe fourth in both Stage Two and the Final Stage.

With 12 of 16 races complete in the Gander Trucks regular season, Burton currently sits sixth in the driver point standings, but finds himself in the eighth and final spot on the playoff grid. With Ross Chastain having a win and on the verge of moving into the top 20 in points and becoming playoff eligible per the NASCAR rule book, Burton would slide off the playoff grid to ninth. Not only did the No. 18 team have a strong run at Chicagoland, playoff contender Ben Rhodes had engine problems and finished 32nd. His complications allowed Burton to close to within 13 points of what would be the eighth and final playoff spot once Chastain works his way onto the grid.

Solid finish for you tonight Harrison. You are on a strong run of good finishes.

“We are working really hard. All of the guys at KBM (Kyle Busch Motorsports) have been working their butts off, week in and week out. They are giving us really fast trucks. They are really fun to drive. I am just lucky to be in this position. We are fighting to get into the Playoffs with our Safelite Racing team. It is a lot of fun for a team to try and come back and get in the Playoffs. If we get in, they better watch out.”

Are you feeling the pressure to get in the playoffs?

“Yes and no. It has always been on since the start of the season. Fourth-place is a good finish, but not what we needed. We need to win. It will make it a whole lot easier to know if we are in the playoffs or not.”

Burton remained sixth in the Gander Trucks driver point standings. After 12 races he finds himself 111 tallies behind points leader Grant Enfinger. He currently sits in the eighth and final spot on the playoff grid, but would fall to ninth if Ross Chastain, who has a win, is able to make his way into the top 20 in points. Chastain is currently 10 points out of 20th.

Burton will be back behind the wheel of the No. 18 Safelite AutoGlass Tundra when the NASCAR Gander Outdoors Truck Series resumes action July 11 at Kentucky Speedway in Sparta. Live coverage of the Buckle Up in Your Truck 225 begins Thursday at 7:30 p.m. ET on FS1.