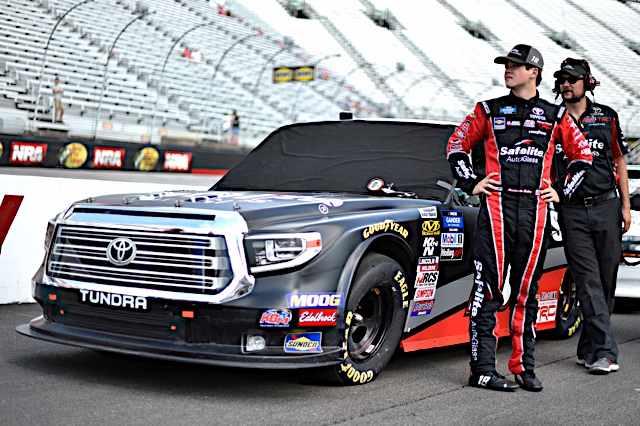 Are you looking forward to the lone road course on the Gander Trucks schedule?

“I’m really excited to get to Canada this weekend and make left and right turns in my Safelite AutoGlass Toyota Tundra The truck series race at Canadian Tire Motorsport Park has always been an awesome show and I expect that it will be again on Sunday. A lot of fans come out to this race and it’s a great atmosphere — it’s going to be a lot of fun to be a part of it.”

How does Canadian Tire Motorsport Park compare to the other road courses you’ve raced at?

“Canadian Tire Motorsport Park is a tough road course because it combines the technicality of a slower course with the speed of a faster one and because of that mistakes can add up quickly there. We just need to go out and be mistake free throughout the race and put our Safelite AutoGlass Toyota Tundra in a position to go for the win late in the race.”

KBM-X134: The Safelite AutoGlass team will unload X-134 for Sunday’s Gander Trucks event at CTMP. It is the same Tundra that Erik Jones drove to his victory in the 2015 event north of the border. Noah Gragson qualified second, led a race-high 35 laps and finished ninth behind the wheel of X-134 in last year’s event at the 10-turn road course.