Greg Biffle to Pilot the No. 51 Tundra in June Race at Texas Motor Speedway﻿ 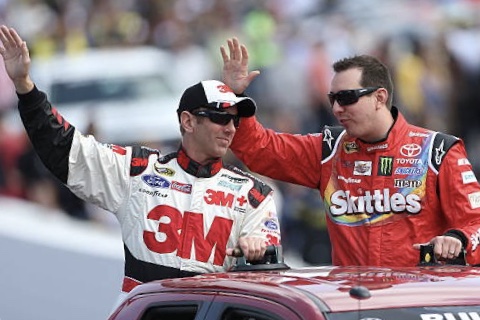 MOORESVILLE, N.C. (March 28, 2019) – Kyle Busch Motorsports (KBM) announced today that 2000 NASCAR Gander Outdoors Truck Series (NGOTS) champion and 19-time Monster Energy Cup Series winner Greg Biffle will pilot the team’s No. 51 Tundra in the June 7Truck Series race at Texas Motor Speedway (TMS) in Fort Worth. In preparation for the June event, Biffle is scheduled to make an undetermined number of laps in one of today’s practice sessions for theVankor 350 while owner-driver Kyle Busch will still pilot the No. 51 for the majority of both practice sessions.

“As we were putting the finishing touches on our driver lineup for this year, we found ourselves looking for someone to drive the No. 51 Tundra in the June race and we are fortunate to be putting a driver of Greg’s caliber behind the wheel,” Busch said. “I’ve been friends with Greg for a long time and we’ve always joked about how it would be cool for him to drive trucks again. When this opportunity came about the talks got serious and we both decided it was smart decision. Not only is he capable of stepping right in and getting another win for the No. 51 team as we work towards the Owner’s Championship, he will also be an experienced teammate for Harrison (Burton) and Todd (Gilliland) to lean on that weekend as they try to secure a spot in the playoffs and pursue another Truck Series Driver’s Championship for our organization. Once we worked things out with Greg to race for us in the June event, we made a last-minute decision for him to get in the truck and make some laps in practice today and began working on getting all of the proper approvals and paperwork completed so that he is able to do so.”

“I’ve always said that I would return to NASCAR in the right situation and when Kyle and I started talking about that KBM needed a driver for the June Texas race I felt like this was the right opportunity to return to the track and I’m thankful for the opportunity to be able to drive such good equipment,” Biffle said. “I started my career in the Truck Series and it was one of the greatest times of my life, so it’s going to be a lot of fun to get back behind the wheel of a truck.”

Biffle, who has not competed in a NASCAR event since the Cup Series finale in 2016, has 16 wins, 12 poles, 42 top-five and 54 top-10 finishes,resulting in an average finish of 9.1 across 81 career NGOTS starts. He captured Truck Series Rookie of the Year honors in 1998, finished second in the championship standings in 1999 and then won the series championship in 2000. In addition to his 16 Truck Series wins, theWashington-state native earned the NASCAR Xfinity Series crown in 2002 and has 20 wins in that series as well as 19 Monster Energy Cup Series victories.

A sponsor announcement for Biffle’s return to the Truck Series will come at a later date.

Since debuting in 2010, Kyle Busch Motorsports (KBM) has quickly established itself as one of the most successful teams in all of NASCAR. Owned by 2015 Cup Series champion Kyle Busch and fueled by his passion for winning, the organization holds the Gander Outdoors Truck Series records for most career wins (71) and most wins in a single season (14 in 2014). In addition to collecting a series-record six Owner’s Championships, the organization has produced two championship-winning drivers; Erik Jones (2015) and Christopher Bell (2017).