Gragson’s Season Heats Up at Gateway 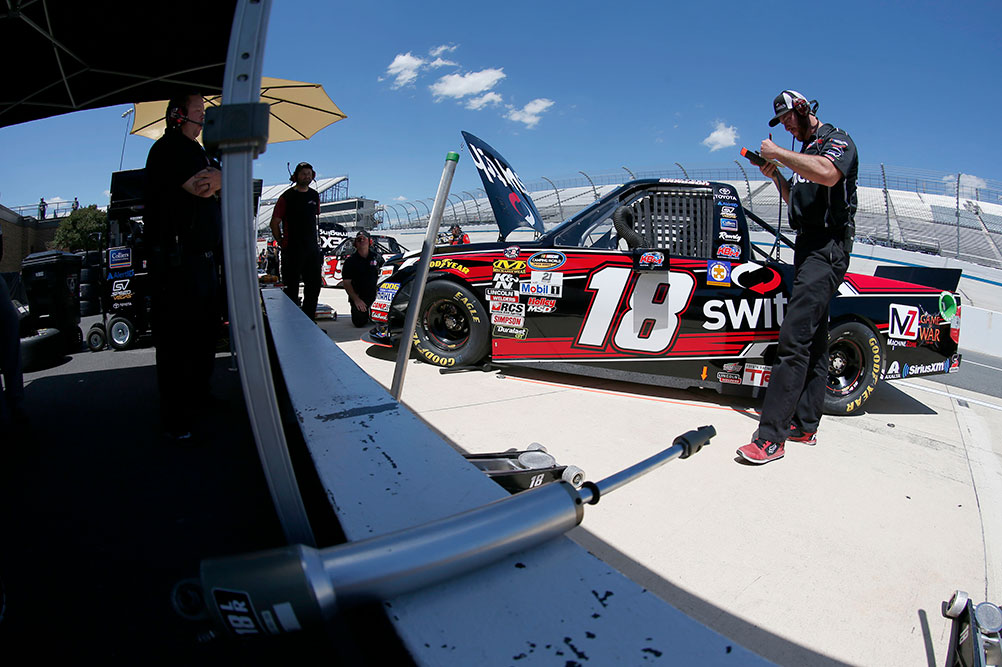 MOORESVILLE, N.C. (June 13, 2017) – As the NASCAR Camping World Truck Series (NCWTS) heads to the Midwest, the temperature and the competition are both increasing. The forecast calls for highs in the 90s and the intensity on the track will be even hotter. Rookie Noah Gragson is coming off three consecutive top-10 finishes and won his first career pole last weekend at Texas Motor Speedway. After a two-day test at Gateway Motorsports Park last month, he feels confident heading back to the 1.25-mile oval in hopes of parking his Switch Tundra in Victory Lane.

Gragson had a big week leading up to last week’s race at Texas. He posted a video on Twitter of him eating a large portion of wasabi if he received 500 retweets. He received over 1,100, including Dale Earnhardt Jr. The video was replayed on “Race Hub,” “NASCAR America,” ESPN’s “SportsCenter” and even “Mike and Mike.” Gragson followed that up with his high school graduation walk at Texas Motor Speedway, where he decided to forego the ceremonial kiss on the cheek from the track’s “Great American Sweethearts,” and went for the lips instead. The video has over 8,000 views on his Facebook page. He did some racing there as well, winning his first career NCWTS pole, leading 13 laps (his first laps led in NCWTS competition) and rallied from two laps down to finish seventh.

This weekend at Gateway, the 18-year-old would like to improve on last weekend by not only starting first, but finishing first as well. Gragson, along with his Kyle Busch Motorsports (KBM) rookie teammates Todd Gilliland, Harrison Burton and Myatt Snider, spent two days testing at Gateway in May. It was time well spent since he had never been there and used the opportunity to get the feel of the track and build speed throughout the test. His other KBM teammate, Christopher Bell, is also a valuable resource as the defending winner of last year’s Drivin’ for Linemen 200. KBM teams have won twice at Gateway, last year with Bell and in 2014 with Darrell Wallace Jr.

The heat will be on Saturday at Gateway, but Gragson is prepared for the challenge. After two days of testing, watching hours of past races, conversations with his teammates and crew chief (Marcus Richmond) and a fast Switch Tundra, it’s time for Gragson to turn up the temperature on the competition.

What did you learn testing at Gateway for two days last month?

“It’s definitely different than any track I’ve been on before. I was treating it like a road course because both corners are fairly different. Turns three and four are fairly flat, long and sweeping, while turns one and two are really narrow, tight and slightly banked. You have to treat them as two different corners like you would corners on a road course. I felt like we got a handle on the track and made some positive gains in the test, so I’m ready to go back there and execute.”

It’s going to be extremely hot Saturday. Does being from Las Vegas help you cope with the heat better, or is it the same for everyone?

“I’m going to try and not worry about the heat and stay focused the whole time. I just need to work on hydrating myself before, during and after the race. There will be so much humidity at Gateway, which is something I’m not used to as much. Vegas is a dry heat so I’ll kind of be out of my comfort zone, but there are plenty of hot races coming up, so I’ll get used to it.”

Talk about your wasabi video getting so much attention in the national media last week. Did you think that would happen?

“Last week was a really big social media week for me. I ate the wasabi and I was retweeted by Dale (Earnhardt) Jr., for it. So many national shows picked up the video, even ‘Mike and Mike’ on ESPN. Then I did my graduation walk at Texas Motor Speedway last weekend and I decided to kiss the two girls on stage and qualified on the pole, so it was a really great week for me on social media. I don’t know if I can keep that going, but I’m going to try to keep our momentum of top-10 finishes going. We’ve had a lot of speed these last few races, but something has gone wrong, or we’ve made mistakes. We have all the pieces to the puzzle, we just need to finish putting them together.”

What things did you work on during your test at Gateway last month?

“It took a little bit to get up to speed. We spent the first half of the day getting Noah comfortable with the track, and then it rained out the afternoon. The second day we really hit it strong. We worked on our long runs and making sure he was secure in the turns. It was a good test for us and I think we’ll be in good shape when we unload Saturday morning.”

How much of the data will change since it will be 30 degrees hotter than when you tested?

“The heat will make a difference. I think if you were already tight, you will be tighter and if you started out loose, you will free up even more. Hopefully we can have a good balance and the track will be just a little slower than when we tested.”

KBM-025: The No. 18 Switch team will race KBM-025, for Saturday’s Drivin’ for Linemen 200 at Gateway Motorsports Park. This is the same Tundra Christopher Bell drove to Victory Lane at Gateway last year.