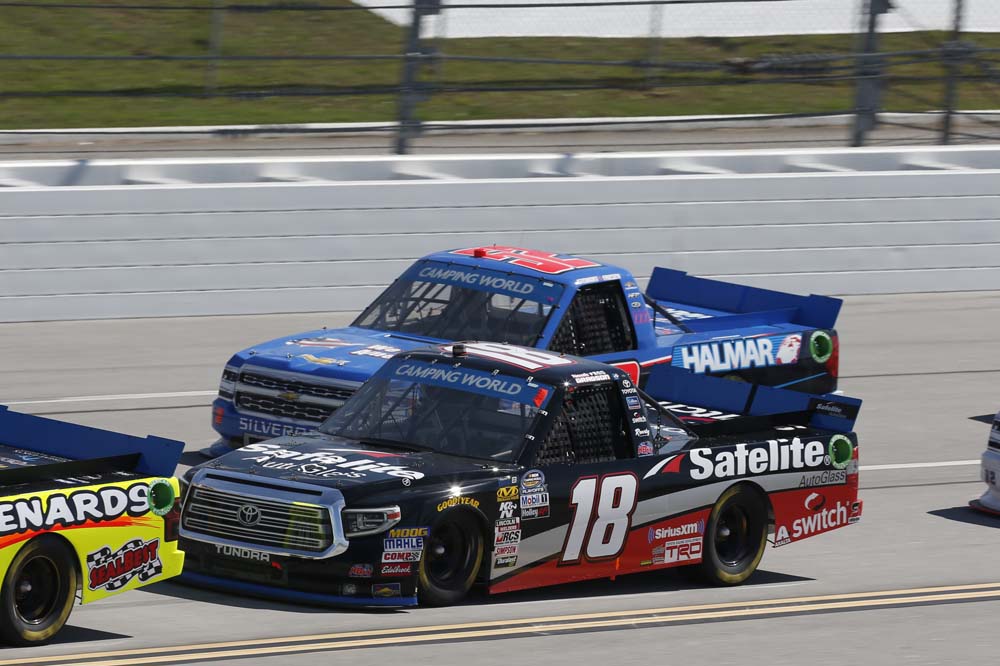 Noah Gragson and the No. 18 Safelite AutoGlass team came close to perfectly executing the game plan they put in place for Saturday’s Fr8auction 250 at Talladega (Ala.) Superspeedway. They were able to collect a handful of stage points to pad the 23-point cushion they had on the cutoff line entering the race and then avoid incidents in the middle of the race to put themselves in a position to win the race in the closing stages.

Gragson vaulted from the third position to the lead with four laps remaining and remained out front when the field took the white flag. As the pack raced down the backstretch, the Las Vegas native maneuvered his Tundra in front of Timothy Peters truck in an effort to impede Peters’ momentum. Peters’ front bumper made hard contact with the rear bumper of the Safelite Tundra and sent it caroming hard into the outside wall before coming to rest on the apron. The caution immediately waved ending the race with Peters as the winner.

The No. 18 team would end the day with a disappointing 13th-place finish, but the result was good enough for Gragson to advance to the Round of 6 in the NASCAR Camping World Truck Series Playoffs. 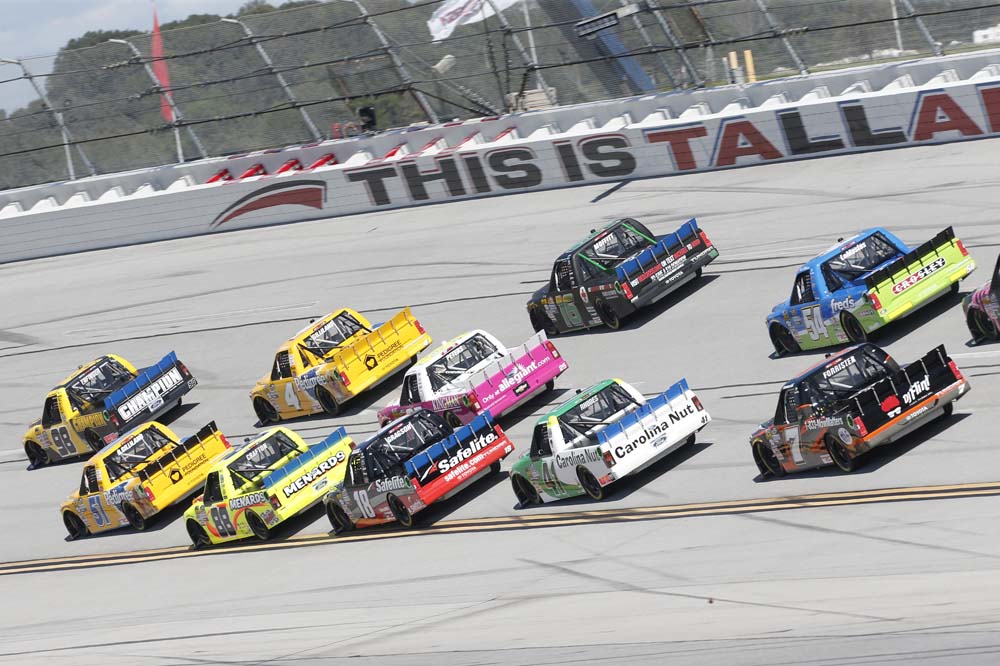 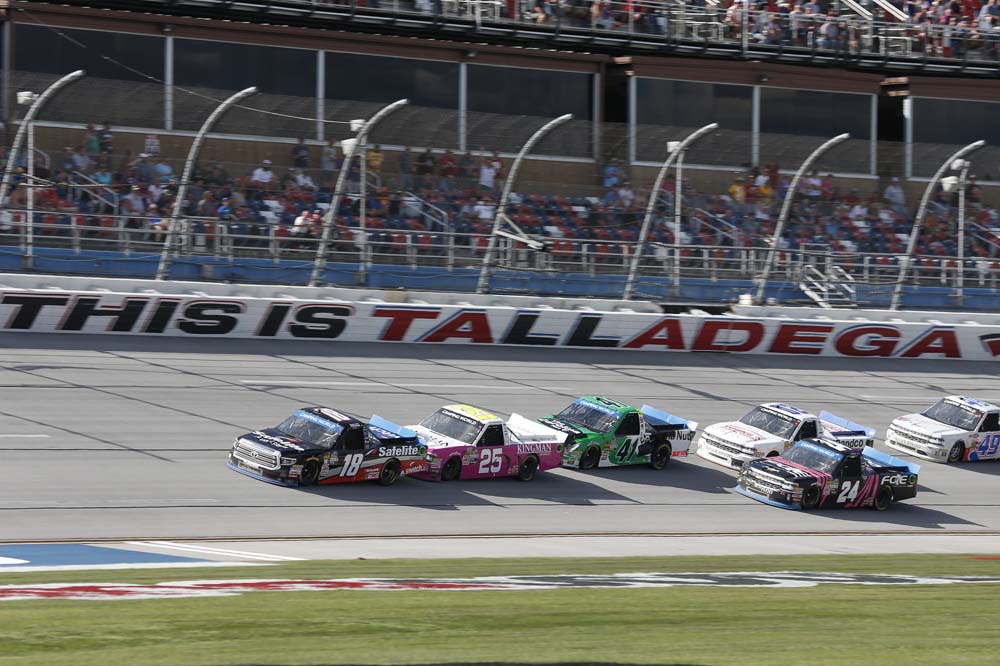 Did you know you were locked into the next round of the Playoffs on the last restart?

“On the last restart, my crew chief Rudy Fugle told me, ‘Hey man, we’re pretty much locked into the next round so listen to your spotter Tony Hirschman and do whatever you have to do to go up there and win the thing.’ I’m a terrible speedway racer and I didn’t know what I was doing – I was just listening to my spotter and he did a really good job. We were bobbing and weaving our way up there and it played out in my favor. These things, you can’t get away or too far out because they’re just going to pass you. I was looking in my mirror those last six or seven laps and got collected, but before that it was a blast, a lot of fun.”

Were you trying to block Timothy Peters when the accident occurred?

“I was just trying to keep Timothy (Peters) with me and have him keep pushing because that was the only way we were going to be able to win the race. Not trying to block, but just trying to stay with my line. That’s speedway racing. I don’t blame anybody in there and I hope they don’t blame me. Hopefully we gave the fans one hell of a finish because it was fun in the driver’s seat. Normally I hate racing at these places, but that was a lot of fun.”

You don’t blame Timothy Peters for the bump at the end of the race, correct?

“No, he was trying to push me to get the win and at the end of the day, that’s the only thing that matters. It is what it is.” 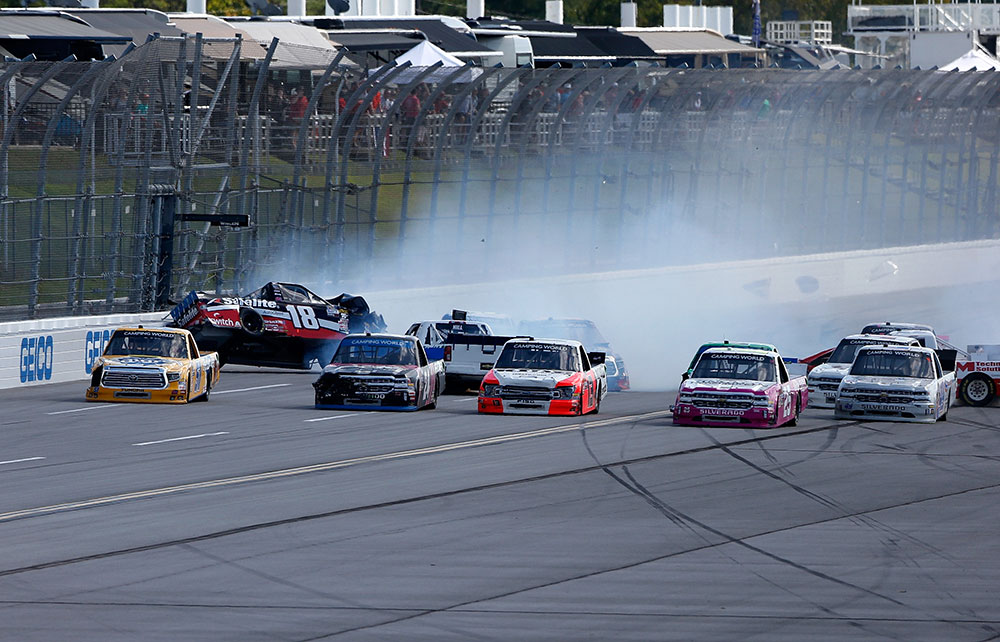 Gragson finished the Round of 8 fourth on the playoff grid and advances to the Round of 6. With the points reset, he will begin the Round of 6 third on the grid based on playoff points earned.

Gragson will be back behind the wheel of the No. 18 Safelite AutoGlass Tundra when the Truck Series resumes action Oct. 27 at Martinsville (Va.) Speedway. Live coverage of the Texas Roadhouse 200 begins Saturday at 1 p.m. on FS1