Gragson Wants a Win North of the Border 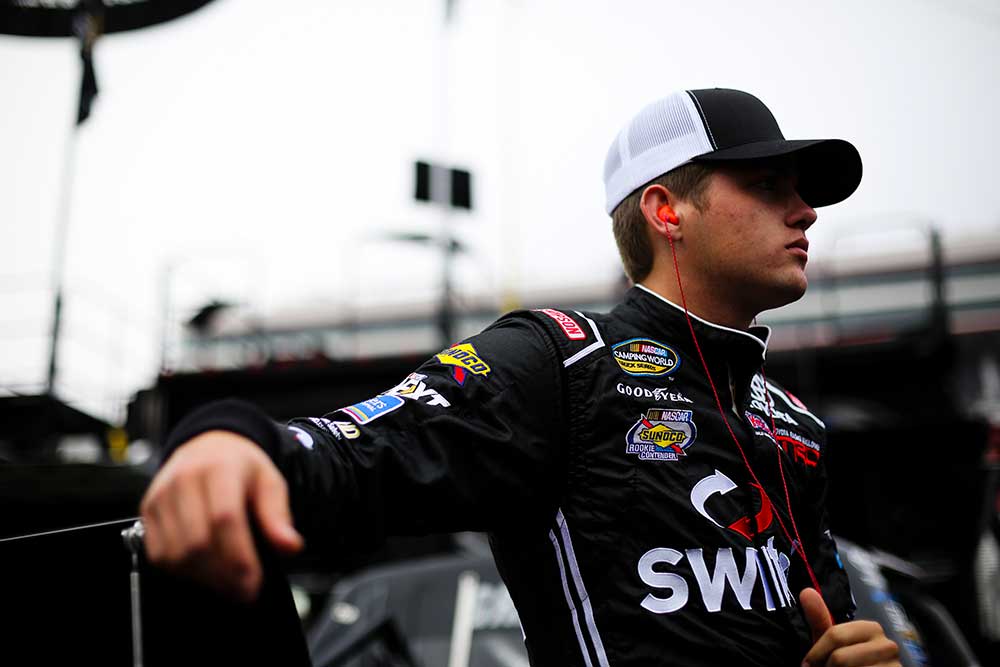 MOORESVILLE, N.C. (Aug. 29, 2017) – Although a rookie in the NASCAR Camping World Truck Series (NCWTS), 19-year-old Noah Gragson is no rookie to road course racing. In fact, he has been looking forward to this race all season and knows he has a great shot at his first NCWTS victory this weekend north of the border at Canadian Tire Motorsport Park (CTMP) in Bowmanville, Ont.

Gragson had three road course victories in 2016. In the NASCAR K&N Pro Series West he claimed two wins at the Utah Motorsports Campus in Grantsville and finished second at Sonoma (Calif.) Raceway after leading 34 of 64 laps. In the NASCAR K&N Pro Series East he took the checkered flag at New Jersey Motorsports Park in Millville after leading eight laps.

A win on Sunday at CTMP would not only be his first in the Truck Series, but it would also secure his place in the eight-driver playoffs. With only two races remaining in the regular season, there is a lot on the line for Gragson to outrun his competitors on the 2.459-mile, 10-turn road course. He is currently 10th in the playoff point system, 34 points out of eighth, which is the cutoff to make the 2017 NCWTS playoffs. Although not impossible to make it in on points, a win would be a guarantee.

His Kyle Busch Motorsports (KBM) team has prepared a new No. 18 Switch Tundra for this weekend. Chassis KBM-049 will make its debut and hopefully end its inaugural run in Victory Lane. Gragson’s crew chief, Marcus Richmond, nearly made it there last year as his driver Cole Custer battled through the grass coming to the finish line, but came up just short in second place behind John Hunter Nemechek.

In the four races held at CTMP since 2013, there have been four different winners. The last two winners, Nemechek (2016) and Erik Jones (2015) were both 19 when they won. In fact, Ryan Blaney was the oldest driver to win this race at the age of 20 in 2014, and Chase Elliott was the youngest at only 17 in 2013. Bet your loonies that Gragson could likely become the next teen to win in Canada.

You have had quite a bit of success on road courses. What is your secret to success turning left and right?

“I don’t really have a secret, but it comes from my background of growing up racing Legend cars and racing at a little, indoor electric go-kart track in Las Vegas. I really liked doing that, so some friends of mine helped me develop my road racing skills. I spent two or three days at a road course in New Mexico where I learned the fundamentals of braking and turning. It sounds easy, but braking on a road course is like an art form. There is a lot of technique as to how you slow the car down, not just jamming on the brakes.”

Have you been looking forward to this race all season?

“This has been circled on my racing schedule all year as the race I’m most looking forward to the most. I won three consecutive K&N road course races last year and finished second to Chase Elliott in Sonoma. I feel like the playing field is more level for me on a road course as opposed to an oval, based on the experience I have versus some of the other drivers.”

How much would it mean to win this race and secure your spot in the playoffs?

“Just winning my first truck race would be huge. That is really my main focus this weekend. I’m not going to be happy with second, or third or any further back. I would be pretty disappointed in myself if I can’t get the job done. Marcus Richmond (crew chief) and the guys at KBM have worked really hard on this new Switch Tundra for me, so I’m not going to be happy anything less than a win.”

Noah has been successful on road courses in the NASCAR K&N Pro Series, how will that translate to the truck?

“I think he definitely has a knack for road racing. He’s done really well and catches on really fast. He’s done well in the TRD simulator, so hopefully he’ll catch on quickly at CTMP as well and we’ll have a shot at the win.”

As a crew chief, do you enjoy road course races?

“I love it. Canadian Tire Motorsport Park has been really good for me as a crew chief. I’ve had a chance to win up there a couple times, but come up just one corner short. Hopefully we can finally get the win this time. We’ve got a new truck to take up there, which I feel really good about.”

Richmond has one top-five, two top-10 finishes and one pole in four starts as a NCWTS crew chief at CTMP. His teams’ best finish was last year when Cole Custer finished second to John Hunter Nemechek in an exciting duel to the checkered flag.