Gragson Wants a Rock-Solid Performance in the Granite State 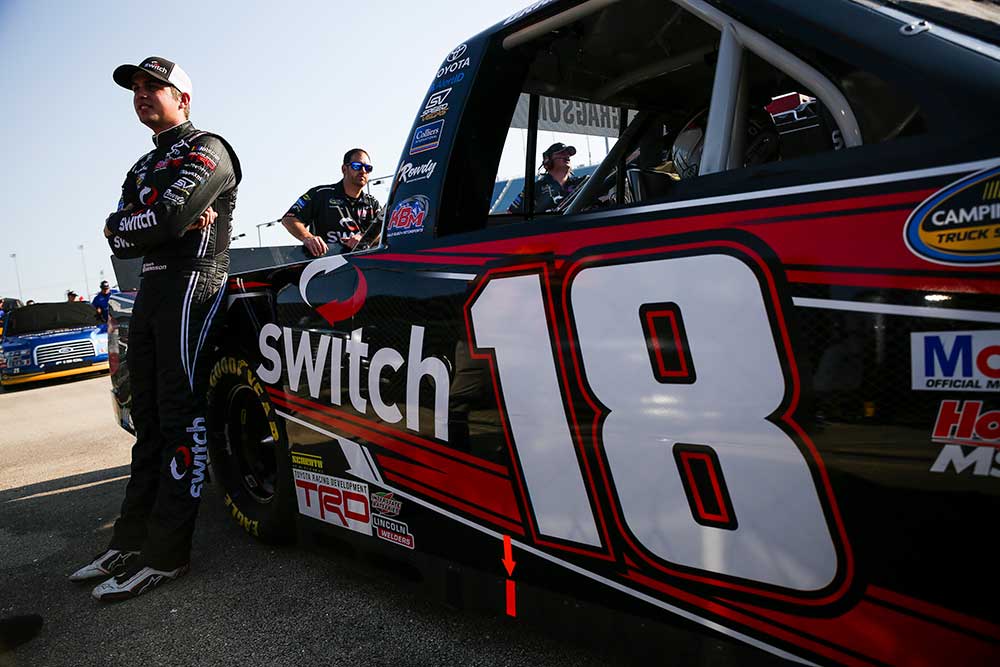 MOORESVILLE, N.C. (Sept. 19, 2017) – Although Noah Gragson did not make the NASCAR Camping World Truck Series Playoffs in his rookie season, there is still a lot for him to accomplish in the final seven races of 2017. He is still searching for that elusive first win, and he and the Switch team feel it is in the near future.

The Las Vegas native has one prior start at New Hampshire Motor Speedway (NHMS) in Loudon. He competed in last year’s NASCAR K&N Pro Series East race. Although his 11th-place finish is not what he wanted, the track time gave him some much-needed experience at the flat track known as the “Magic Mile.” However, this time will be different since he’ll be driving a Tundra and the track won’t be the same as it was with the application of VHT (also known as PJ1 – a custom formulated resin to provide extra traction). With two hours of practice on Friday, Gragson and all the competitors will have to quickly adapt to the new characteristics of the track.

Coming off his 11th top-10 finish of the season last weekend at Chicagoland Speedway in Joliet, Ill., Gragson heads to NHMS with a proven winning Tundra. He finished ninth with this Switch Tundra at Gateway Motorsports Park in Madison, Ill., and his KBM teammate, Christopher Bell, won with it at Gateway in 2016, along with a second-place finish in last year’s New Hampshire race. In eight starts since 2015, this truck has one win and has led 116 laps.

KMB teams also have a strong record at NHMS collecting three wins, three poles, 575 laps led, five top-five and eight top-10 finishes resulting in an average finish of 7.1 across 11 starts in the Granite State. Owner-driver Kyle Busch collected two of his organization’s wins in 2010 and 2011, while William Byron captured KBM’s third win last year. All three wins were in dominant fashion from the pole position and led at least 89 percent of the laps.

Gragson is looking to be a playoff spoiler this weekend at New Hampshire with a trip to Victory Lane and a celebration with some melted butter and a big lobster.

Is New Hampshire a track you feel suits your driving style?

“Even though I raced there last year in the NASCAR K&N Pro Series East race, I don’t really know what to expect with the VHT on it this time. It will be a completely different race track. I’m not sure what I learned there in the past will apply this weekend. Although with some of the progressive banking, it gives you options to move around.”

Now that the playoffs have been determined, can you focus less on points and more on just winning?

“I’m mainly going to focus on having fun. I think I’ll run better if I’m having fun while I’m racing. I put a lot of pressure on myself to win a race and get into the playoffs and now that pressure is behind me. I still have pressure to win, but it’s different not necessarily worrying about stage points to help you in the playoffs. For the rest of the season I’m going to keep learning and appreciating the opportunity I have, and hopefully that win will come.”

You released your first rap video this week. How did that come about?

“Well it was a pretty low-budget production filmed on a cell phone at Kyle Busch Motorsports. I am determined to win the NASCAR Most Popular Driver award in the Truck Series, so I decided to write my own rap song to convince people to vote for me. After our competition meeting on Monday morning, I wrote it in about an hour, found a good beat I could rap to and had a cameo appearance by Todd Gilliland wearing the shark head I wore in Bristol. I might pitch it to some of my friends in Vegas to see I have a future in rapping, but I’m pretty sure I need to stick to racing!” Noah’s Most Popular Driver rap video

How will the racing change this weekend with the application of the VHT on the track?

“I think it’s going to be a wild card for all of us. We’ve gone back and watched the XFINITY race from a few months ago to see how that played out. Todd Gilliland will be racing with us this weekend in the No. 51 Tundra and he won the K&N race in July on it, so he can give Noah a few pointers based on what he felt. I think the biggest thing will still be having good track position and everything will take care of itself.”

KBM-025: The No. 18 Switch team will race KBM-025, for Saturday’s UNOH 175. Gragson was ninth at Gateway with this Tundra this year, while Christopher Bell won at Gateway and was second at New Hampshire with it in 2016

Richmond has two top-five and four top-10 finishes in nine starts as a NCWTS crew chief at Loudon. His teams’ best finish was fourth in 2015 with driver Timothy Peters.