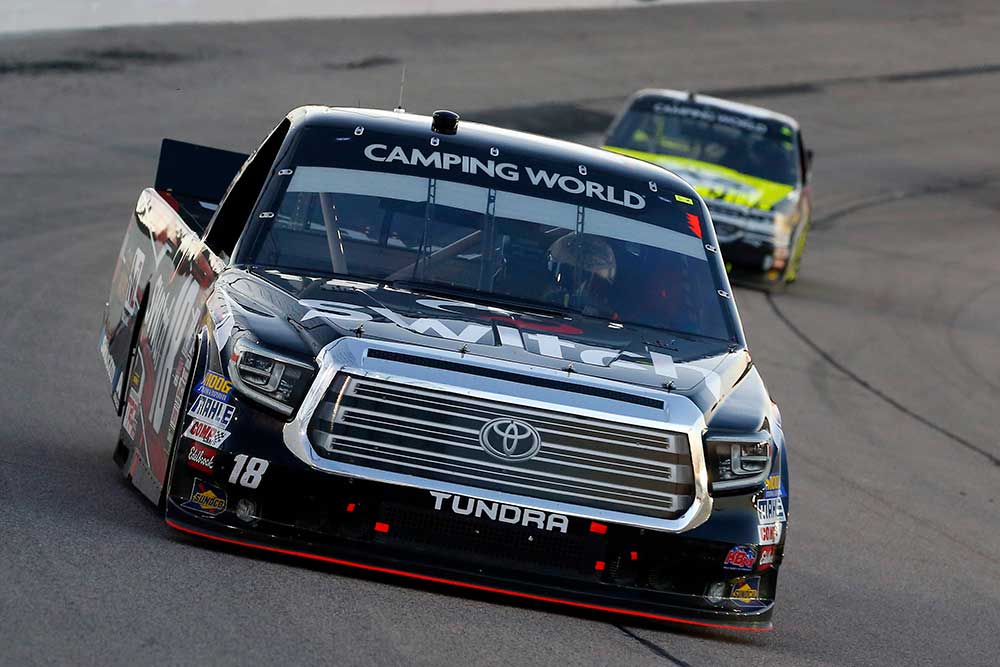 MOORESVILLE, N.C. (July 25, 2017) –  The 19-year-old rookie will make his first start at Pocono in the NASCAR Camping World Truck Series (NCWTS) on Saturday and his second start in the ARCA Racing Series on Friday. It will be the first time Gragson has run two races at the same track in the same weekend this season.

Coming off his seventh consecutive NCWTS top-10 finish last week at Eldora, Gragson is eager to get his No. 18 Switch Tundra back on pavement during practice Friday. With five races remaining before the playoffs begin, he is doing everything he can to be one of the eight drivers contending for the championship. He has not finished outside of the top 10 since Kansas Speedway on May 12, which has moved him up to ninth in the driver point standings, only seven points out of eighth.

To help Gragson prepare for the truck race, he will also be competing in Friday’s ARCA race. Although there are considerable differences between the Toyota Camry and Tundra he will be racing, the additional laps learning the track will be quite valuable. Gragson started last year’s ARCA race at Pocono in sixth place, but on the first lap encountered a mechanical issue which sent him to the garage for much of the race. He was able to return to the track for the last half of the race, but hopes to have a much better showing this time around.

Bouncing between two garages is nothing new for Gragson’s boss, Kyle Busch, who will also be competing in the NCWTS race on Saturday. Busch captured KBM’s first win at the “Tricky Triangle” in 2015 leading 53 of 69 laps. William Byron made it back-to-back wins for KBM leading 44 of 60 laps in last year’s event. Saturday Gragson, Busch and Christopher Bell will be looking to make it three in a row for KBM at Pocono. While Gragson is still looking for his first Truck Series win, Bell has claimed three victories (Atlanta, Texas and Kentucky) in 2017 and Busch has two wins (Kansas and Charlotte) under his belt.

While racing in two different series in the same weekend may be challenging, Gragson sees it as an opportunity to gain experience and a chance to take home two trophies in one trip.

Talk about your first start at Pocono last year in the ARCA Racing Series event. Were you able to gain any experience from that?

“I really didn’t gain very much during the race at Pocono last year since we had a mechanical issue on the first lap of the race. I did get some valuable practice time in the ARCA car, but it’s quite a bit different from the trucks. I’m going into Pocono open minded and hoping for the best outcome.”

With seven consecutive top-10 finishes, do you feel like that first win is getting closer?

“I really think we are going to be good this weekend at Pocono. I am going to treat it like a road course and make the straightaways as long as possible. I was watching film this week and it just seems like there is a lot of drafting down the long straightaways, and with three different corners it seems more like a road course than a normal oval.”

Are you happy to be back on pavement this weekend after your first dirt race at Eldora?

“I am so happy to be back on pavement this week since I really didn’t know what I was doing at all last week on the dirt at Eldora. I kind of hung it out there and it ended up working since we finished seventh. Eldora was fun, but Pocono is more my natural habitat.”

With seven consecutive top-10 finishes, do you feel like Noah’s first win is going to happen soon?

“I talked to Noah about this in our pre-race notes. We need to score the maximum amount of stage points to get all the points we can in every race. We’ve been right there a few times, but we’ve made mistakes which kept us from having a shot at the win. Once we are mistake-free we’ll have a shot to get Noah and the Switch team to victory lane.”

How much will running the ARCA race on Friday help him on Saturday?

“I think everything is going to help. Pocono is a little bit tricky with three different corners, so he’s just got to pay attention to different throttle points because they are different in the ARCA car versus the truck. If he can do that I think the ARCA race will really help him a lot.”

KBM-039: The No. 18 Switch team will race KBM-039, for Saturday’s Overton’s 150 at Pocono Raceway. This is the same Tundra Gragson raced at Texas Motor Speedway earlier this season where he won the pole and finished seventh.

Richmond’s Record:
Entering the 2017 season, Marcus Richmond had collected nine wins, 11 poles, 52 top-five and 107 top-10 finishes across 222 races in his 11 seasons as a crew chief in the Truck Series. The veteran crew chief has been to victory lane with five different drivers (Ty Dillon, Kevin Harvick, Timothy Peters, Johnny Sauter and Dennis Setzer) and has recorded at least one win every year since 2012. The North Carolina native’s drivers have finished inside the top five in the Truck Series championship standings four times in the last five seasons, including a runner-up finish in the standings with Ty Dillon in 2012. His most recent stop was at JR Motorsports last season, where he guided Cole Custer to two poles, four top-five and 12 top-10 finishes over the last 16 races of 2016. Richmond joined KBM in December 2016 to coach rookie Noah Gragson in 2017.
Richmond has one top-five and three top-10 finishes in six starts as a NCWTS crew chief at Pocono. His team finished fifth last year with Cole Custer behind the wheel.
Share this post
Share on FacebookShare on Facebook TweetShare on Twitter