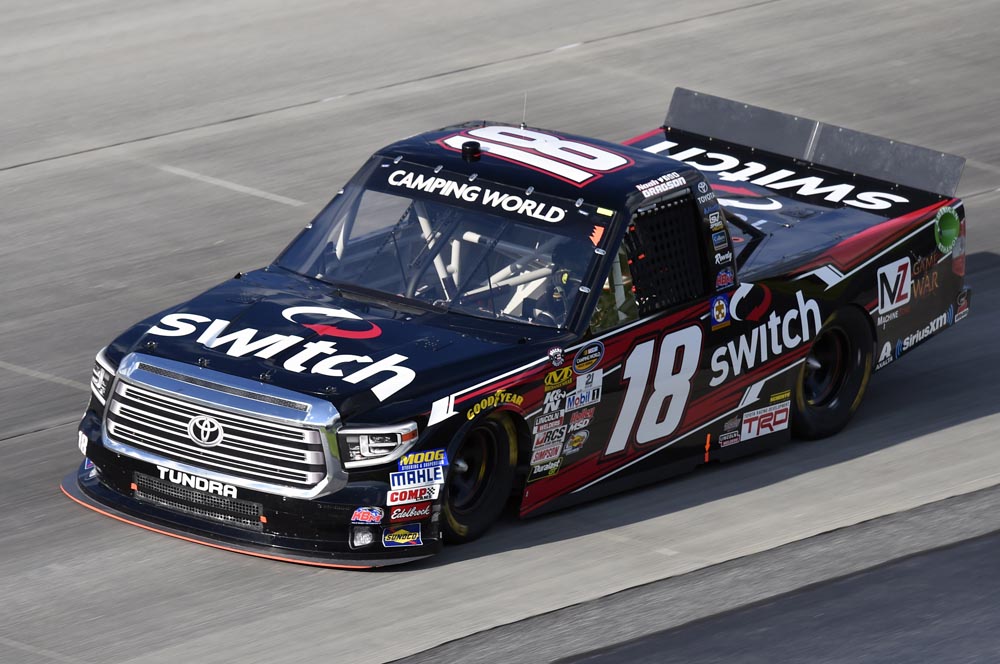 MOORESVILLE, N.C. (Nov. 1, 2017) – Coming off his first NASCAR Camping World Truck Series (NCWTS) victory last weekend at Martinsville (Va.) Speedway, Noah Gragson is eager to get back in his No. 18 Switch Tundra at Texas Motor Speedway in Fort Worth this week. It will be his second race this season at Texas and since everything is bigger in Texas, he expects big results.

The 19-year-old rookie has been busy this week enjoying the accolades and recognition from his first win Saturday in Martinsville. After battling with NCWTS veterans Matt Crafton and Johnny Sauter for the lead in the final 50 laps, Gragson made a move rarely seen at the flat, half-mile track. Following a caution, Gragson restarted second and was able to make the outside lane work as he battled side-by-side with Crafton for nearly a lap before successfully clearing him for the lead off the exit of turn four. Pulling away from the field, he led the final 10 laps en route to a 1.486-second margin of victory over Crafton and Sauter. It was a great race for all the Kyle Busch Motorsports (KBM) drivers with Harrison Burton finishing fourth, Todd Gilliland fifth and point leader Christopher Bell in eighth.

Gragson has high expectations for his second race in Texas on Friday night. During his first race there in June, he won his first NCWTS pole and finished the race seventh. Despite having one of the fastest trucks in the race, a loose wheel caused the team to make additional pit stops, which put them two laps down. Gragson rose to the challenge, got his laps back and fought his way back into the top 10 before the race ended.

While many are focused on the six drivers remaining in the 2017 playoffs, Gragson hopes to steal their thunder again this week with another win. Taking the same Toyota Tundra Kyle Busch won with at Charlotte (N.C.) Motor Speedway in May, the Las Vegas native is ready to see if he can make it two wins in a row. Adding a cowboy hat would be a nice addition to his growing trophy collection which already consists of a grandfather clock from Martinsville and a Winchester rifle from winning the Winchester 400 ARCA/CRA Super Series race, all of which came in October. Gragson is hoping to continue his winning ways into November and finish the season strong.

Has it sunk in yet that you won at Martinsville Speedway last weekend?

“It was pretty cool. It feels good to get the weight off my shoulders waiting for that first win to happen. Now I can focus on trying to get another win and I know what I need to do now, although every track is very different. There is still a lot of hard work that needs to be done, so I need to keep on striving to get better and I still have a lot to learn.”

How much did it help you having Kyle Busch on your radio giving you advice during the Martinsville race?

“It helped quite a bit. I was using the advice he was giving me. Kyle, my spotter Tyler Green and my crew chief Marcus Richmond, they all did a great job of helping me. I used every conversation I ever had about Martinsville on that last restart and tried to put everything together and it ended up working out. I’m thankful for all of the people I have helping me along the way. I have a good group surrounding me.”

What are your expectations for your second trip to Texas this year, especially after winning the pole at your first race there?

“We won the pole which was great, but finished seventh because we had a loose wheel and went a couple laps down trying to fix that issue. We got our laps back and fought back to seventh, so if we can have a clean race we should be pretty good this weekend. We were one of the fastest trucks there in June, but my inexperience kind of hurt our finish and the loose wheel didn’t help. Going back there I know how the truck needs to feel to be able to have that speed. June was a big question mark for everyone with the new pavement, but going back I think we need to step up our game since everyone will have a better idea of what to expect.”

How much momentum from a win does a team carry over to the next race?

“I think it carries over a lot, especially for a driver. It gives everybody the confidence that they can win and every week you go out to try to repeat that. We had a really good truck at Texas in June. We won the pole and led some laps, but a loose left-rear wheel got us behind. Hopefully we can build off that and get another win.”

KBM-045: The No. 18 Switch team will race KBM-045, for Friday’s JAG Metals 350. Gragson finished seventh with this truck at Michigan in August, while Kyle Busch took the win at Charlotte in May and finished sixth at Kentucky in July.

Richmond has one win, seven top-five and 10 top-10 finishes in 21 starts as a NCWTS crew chief at Texas. He took the checkered flag with Ty Dillon behind the wheel in 2013.