Gragson is Now a Student of Racing 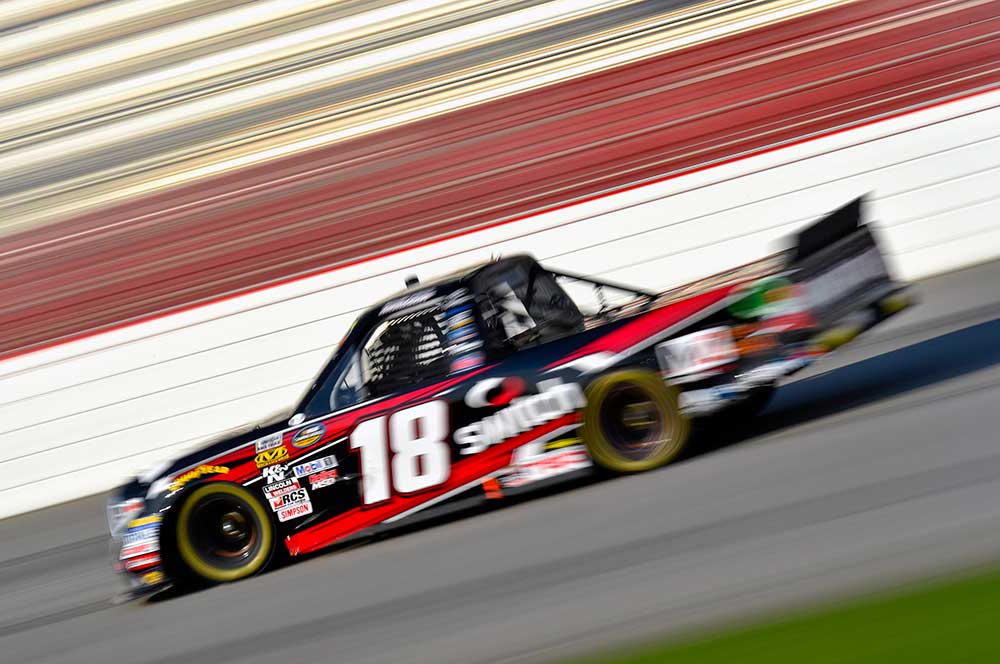 MOORESVILLE, N.C. (May 9, 2017) – After a six-week hiatus in racing, the NASCAR Camping World Truck Series(NCWTS) returns to action at Kansas Speedway in Kansas City on Friday, May 12 in the Toyota Tundra 250. Rookie driver Noah Gragson certainly wasn’t bored during the break in racing, in fact he accomplished quite a lot, including graduating from high school a month early.

The 18-year-old Las Vegas native set a goal to finish his online studies before the end of April so he could move to Charlotte, N.C., to be closer to his Kyle Busch Motorsports (KBM) team before the season gets into full swing. His time in front of the computer was spent doing school work, except for the occasional iRacing challenge to do some professional homework as well. On April 25, Gragson took his last final exam to finish his high school career and begin the next chapter of his life.

With school in the rear-view mirror, Gragson can focus on his No. 18 Switch Tundra. His homework now consists of studying videos of past races, taking notes in competition meetings and applying what he has learned to the race track. He does have some experience at Kansas after competing in the ARCA Racing Series event last fall there. Running for Venturini Motorsports, he started eighth and finished fifth while gaining 100 laps of valuable seat time.

He also has the resources of KBM to help him prepare. KBM teams have won twice at Kansas, once with owner-driver Kyle Busch in 2014 and then William Byron in 2016. They have collected nine top-10 finishes in 15 starts and led 340 laps at the 1.5-mile oval.

Now Gragson will be put to the test at Kansas to use what he learned racing there last year, along with the aerodynamic experience he gained in the truck at Atlanta (Ga.) Motor Speedway earlier this year. Coming off his first top-five finish in the NCWTS (fourth at Martinsville (Va.) Speedway on April 1), Gragson and his KBM team would like to keep the momentum going with another strong finish in the Switch Tundra at Kansas.

Does your fourth-place finish at Martinsville last month give you more confidence heading into Kansas?

“The finish at Martinsville was huge for our team since the first two races didn’t go how we were hoping. Running in the top five with guys like Chase Elliott, my teammate Christopher Bell and Johnny Sauter definitely gave me more confidence. As a team, we knew we could compete with those guys, so it was nice to have a race where everything finally came together.”

What have you done to stay busy since the last truck race?

“I’ve been working really hard to finish high school early. I took my last exams and finished up about two weeks ago, so I was pretty pumped to have my high school career behind me. Once I finished school, I moved to North Carolina and have been busy getting situated before the season really starts up this week. I’ve also done some testing in my Switch Tundra at Iowa Speedway and Charlotte Motor Speedway, in addition to testing KBM’s Super Late Model at Bristol Motor Speedway. I would have liked to have been racing more, but at least I was able to get some seat time testing.

You ran an ARCA race at Kansas last year. What are your thoughts on the track?

“I ran Venturini’s ARCA car at Kansas last year. It was my first mile-and-a-half race and I really didn’t know what I was doing. I ran Pocono, but that’s more like a circular road course, so I didn’t know what to expect at Kansas. We ran really well and had a lot of speed and I was trying to learn as much as I could. I ended up finishing fifth so that was cool. Aero is so important at Kansas and it seems like the race is right around the bottom, so it’s difficult to pass and the restarts are tricky because it’s so wide and everyone fans out going into turn one. It’s a really cool track.”

What will be the biggest challenge for Noah at Kansas?

“Kansas is such an aero-dependent track and he’s still learning to get the feel for that. You have to take what the track will give you and try to stay out of trouble. Kansas is smooth and fast, so you have to be smart about not putting yourself in a bad position, especially early in the race. Noah ran the ARCA race there last year, so he has some experience there and with two practices on Thursday that will help him get the feel of the track in a truck versus a car.”

What have you and the team been doing since the last truck race six weeks ago?

“We’re all pretty excited to get back to the race track. We’ve stayed pretty busy even though we haven’t been racing. We tested for two days at Iowa last month and one day at Charlotte this month. We’ve also been working ahead to get ready for our upcoming stretch of races. Once we go to Kansas we have races six out of the next seven weekends, so the break gave us a chance to get ahead of the game.”

KBM-039: The No. 18 Switch team will race KBM-039, for Friday’s Toyota Tundra 250 at Kansas Speedway. This Tundra was built in 2016 and raced seven times by Christopher Bell with best finishes of fourth at Kentucky Speedway and Las Vegas Motor Speedway.

Richmond has one top-five and two top-10 finishes as a NCWTS crew chief at Kansas. His best finish was fourth with Timothy Peters in 2015.

Chandler Smith Preps for the High Banks of Talladega
September 28, 2021

Chandler Smith Punches Ticket to Round of 8 With First Career Win
September 17, 2021

Chandler Smith Preps for Final Race in Round of 10
September 14, 2021
Search Website