Gragson is Ready for His First Short-Track Test 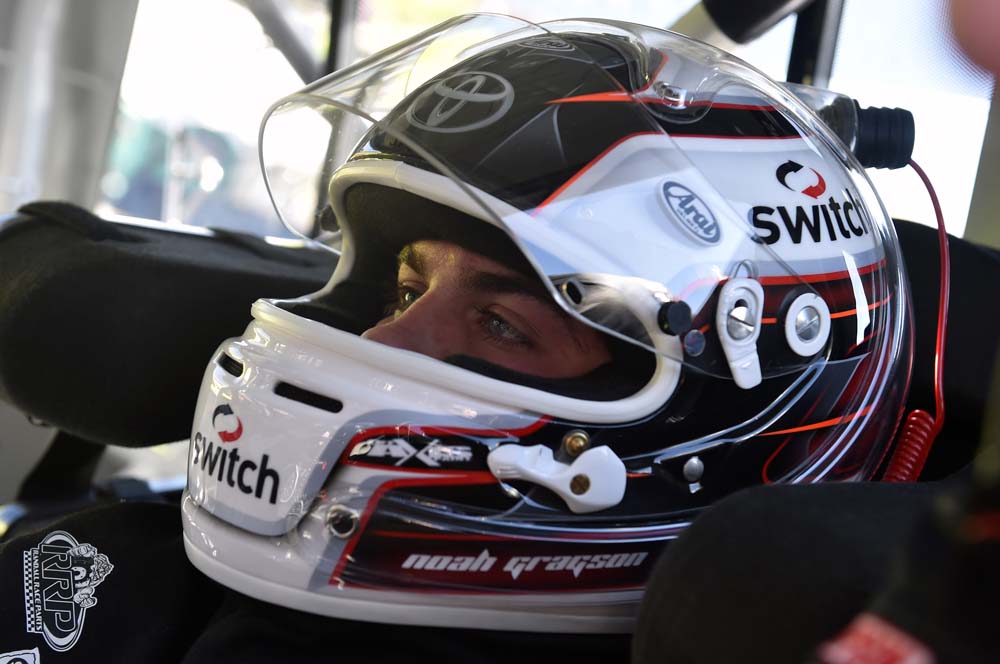 MOORESVILLE, N.C. (March 28, 2017) – Although Noah Gragson does not have any experience at Martinsville (Va.) Speedway, he does have plenty of experience being a student. The high school senior has a lot to learn at the half-mile track this weekend, but he feels prepared for the test ahead of him Saturday in the Alpha Energy Solutions 250.

Part of the learning process is taking experience you already have and adapting it to something new. That is Gragson’s plan this weekend. The 18-year-old rookie has quite a bit of experience on road courses, so he intends to use that knowledge and apply it to Martinsville. On the surface, it may sound like a strange plan, but really the similarities are there. Road courses have long straightaways and tight turns, which is how Martinsville earned its nickname “The Paperclip.” Sure, there are no right-hand turns this weekend, but it makes sense to Gragson and his veteran crew chief Marcus Richmond.

Richmond is no rookie at Martinsville. In fact, he has two wins as a crew chief in the NASCAR Camping World Truck Series there. His first victory came with Dennis Setzer in 2008 and he claimed another win with Kevin Harvick in 2012. In 19 starts, Richmond’s truck teams have two wins, four top-five, 11 top-10 finishes and led 456 laps. Last fall, Richmond earned his most recent top 10 at Martinsville with another young driver, Cole Custer.

Gragson has done his homework for this weekend and is as prepared as he can be for the test ahead of him in his No. 18 Switch Tundra. He has studied videos of previous races, talked to fellow drivers and crew chiefs about what to expect and has run simulations. But unlike many of his tests in high school, this one will definitely be graded on a curve.

From what you have heard, is Martinsville anything like any other short track where you have raced before?
“I’ve been really leaning on my crew chief Marcus (Richmond) and my late model crew chief back in Las Vegas to try to learn all the little things about Martinsville. I haven’t talked to Kyle (Busch) yet, but I plan to soon. I know it’s really small, really tight and flat, so you just have to try to get down to the bottom. You have to maximize your braking and be on the gas straight off the corner so it is a bit like a road course. I think I’m a decent road course driver, so if it’s anything like that then we should be pretty good. It’s going to be difficult going there for my first time, so I hope to get out of there with a solid run. I’ve played it on iRacing and video games and it’s a really fun track, so I’m looking forward to it.”

If you won the grandfather clock where would you keep it?
“Wow, I don’t know. I like the trophy just because it has so much history. I don’t have a house of my own yet, but I certainly would find a good place for it if I won.”

What have you done to keep busy during the month-long break since the last truck race?
“I’ve been really slammed with school trying to graduate early. My parents want me to graduate a month early at the beginning of May, so I’ve been working really hard on all of my assignments to get them all done while maintaining all As. That’s taken up most of my time, but I also raced my late model last weekend just to get back in the seat and have a little fun. I’m ready to get back in my Switch Tundra, that will really be fun.”

What is the key to getting around Martinsville?
“It’s a tough place to get around, but it’s a lot like a road course. You drive straight in, get on the brakes hard and try to let it roll through the turn and drive straight up off. You have to keep the rear tires on it all day, so hopefully since Noah is really good at road courses he’ll adapt to Martinsville really quickly.”

How tough is it to keep a rookie patient at a track like Martinsville where it’s so difficult to pass?
“I’ve talked to Noah a lot about this. Our spotter (Tyler Green) is going to have to be in his ear a lot helping him stay patient, but you also have to be aggressive if you are starting on the outside to get to the bottom. I guess you could say you have to be patiently aggressive, but you have to be smart too. We need to come out of Martinsville with a solid day so we just need to have everything go right in the race.”

KBM-007: The No. 18 Switch team will race KBM-007, for Saturday’s Alpha Energy Solutions 250 at Martinsville Speedway. Christopher Bell most recently finished fourth with this Tundra at Martinsville last fall. This chassis has three wins at Martinsville with Darrell Wallace Jr., (2013 & 2014) and Denny Hamlin (2011).

Richmond’s Record:
Marcus Richmond has collected nine wins, 11 poles, 52 top-five and 107 top-10 finishes across 222 races in his 11 seasons as a crew chief in the Truck Series. The veteran crew chief has been to victory lane with five different drivers (Ty Dillon, Kevin Harvick, Timothy Peters, Johnny Sauter and Dennis Setzer) and has recorded at least one win every year since 2012. The North Carolina native’s drivers have finished inside the top five in the Truck Series championship standings four times in the last five seasons, including a runner-up finish in the standings with Ty Dillon in 2012. His most recent stop was at JR Motorsports last season, where he guided Cole Custer to two poles, four top-five and 12 top-10 finishes over the last 16 races of 2016. Richmond joined KBM in December 2016 to coach rookie Noah Gragson in 2017.

Richmond has two wins at Martinsville as a crew chief in the NCWTS. His first victory came with Dennis Setzer in 2008, followed by a trip to Victory Lane with Kevin Harvick in 2012.