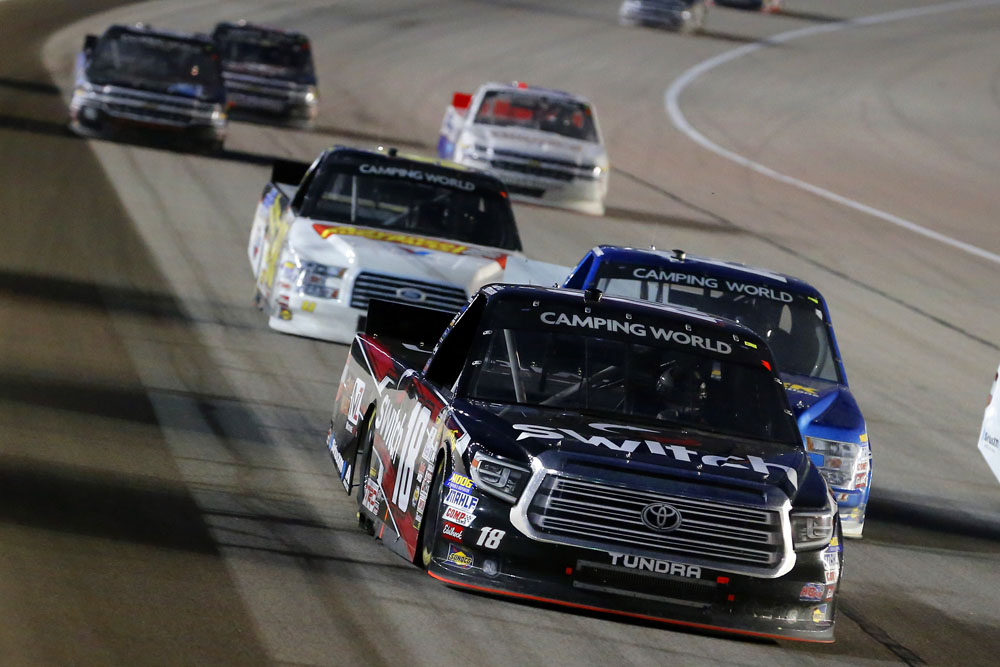 MOORESVILLE, N.C. (Aug. 14, 2017) – This week fans do not have to travel to Rome to watch the gladiators battle in the Coliseum. They only have to get to Tennessee to see “The Last Great Colosseum,” Bristol Motor Speedway, where these gladiators will trade horses for horsepower. Rookie Noah Gragson will be making his first NASCAR Camping World Truck Series (NCWTS) start at Bristol under the lights on Wednesday night in the UNOH 200 and his armor will his No. 18 Switch Tundra.

Although it will be his first Truck Series start at the famed half-mile oval, he has raced there twice in other series. Most recently he competed in the CARS Super Late Model Tour at Bristol in May driving for Kyle Busch Motorsports (KBM). Unfortunately, he was taken out of contention in an accident on lap 10. He also made one start there in 2016’s NASCAR K&N Pro Series East race when he finished 12th.

Gragson will not enter the arena alone for this event. With the addition of a fourth KBM Tundra for this race, he will have some knowledgeable teammates to lean on for information. Owner-driver Kyle Busch has won twice at Bristol in the Truck Series (2010 and 2013), Christopher Bell led 101 laps in last year’s NCWTS race and Harrison Burton captured a win (and a sword) earlier this year in the NASCAR K&N Pro Series East race leading 68 of 70 laps.

With three races remaining in the NCWTS regular season, Gragson is still fighting for his place in the NASCAR playoffs. With five drivers locked in on wins, only three spots remain and he is currently 44 points out of making it into the elite eight. A win at Bristol is the ultimate goal for Wednesday night, and Gragson is up for the challenge. He knows it will not be easy, but he has never backed down from a challenge (or a dare).

Gragson will have 200 laps to prove he is a worthy opponent and intends to leave “The Last Great Colosseum” as the winning gladiator with a sword, trophy and a spot in the playoffs.

Talk about your two previous starts at Bristol?

“My previous experience there will help me quite a bit, just knowing how to get on pit road and the characteristics of the race track. I’ll be in a different type of vehicle being in the truck, but for the most part it should be the same. I haven’t really had a lot of experience with the VHT on the bottom. When I ran the CARS Super Late Model race in May was the only experience I have with the VHT, but it was three weeks after the Cup race, so it was pretty worn off by then. I have a rough idea of what to expect.”

Describe a lap around Bristol?

“Racing at Bristol reminds me of that Gravitron ride at the state fair. You go inside, lay up against the wall and it starts spinning you around really fast and the gravity holds you against the wall so you can’t move. That’s what it feels like to go around Bristol. Your head is pinned to the right side of the headrest because there are so many G-forces from the high speeds and banking. It’s utter chaos and you are always racing someone side by side, whether for the lead, or 15th place or a lapped car. That’s what makes it so difficult.”

If the NCWTS drivers could pick a driver introduction song, what would your song be and why?

“There are a lot of Tennessee fans there so maybe the Alabama fight song to make them all fired up. I did an appearance for the track in Knoxville, Tenn., a couple weeks ago and wore an Alabama hat and the track president (Jerry Caldwell) brought me a Tennessee hat. It would just be fun to get the crowd all riled up. I only root for Alabama because my friend Brandon McReynolds is a big fan.”

Is Bristol one of the toughest races for a crew chief because everything happens so fast?

“It’s hard to hit the perfect balance because you are always loose in and tight off, so you can have 10 different combinations of set-ups which will work. It just depends on what your driver likes and what your truck needs at that moment. There is a lot going on in a short period of time, driver feedback is a very big part of it and the track changes a lot, so there are a lot of variables.”

How will the VHT change how you approach this race?

“It definitely affects the track a lot. If it’s on the bottom you will have to run it and as soon as it starts wearing out, which usually doesn’t happen in time for trucks to move up, but if it does we’ll have to have a truck that’s versatile and can move up to the middle groove.”

KBM-041: The No. 18 Switch team will race KBM-041, for Wednesday’s UNOH 200 at Bristol. This is the same Tundra Kyle Busch won with at Chicagoland Speedway last September and Daniel Suarez finished fifth with at Texas Motor Speedway last November. Christopher Bell placed 25th with it due to an accident at Dover in June.

Richmond has five top-10 finishes in 10 starts as a NCWTS crew chief at Bristol. His teams’ best finish was sixth with Cole Custer in 2016 and Ty Dillon in 2013.