Gragson Collects First Win of 2018 with Dominant Performance at Kansas 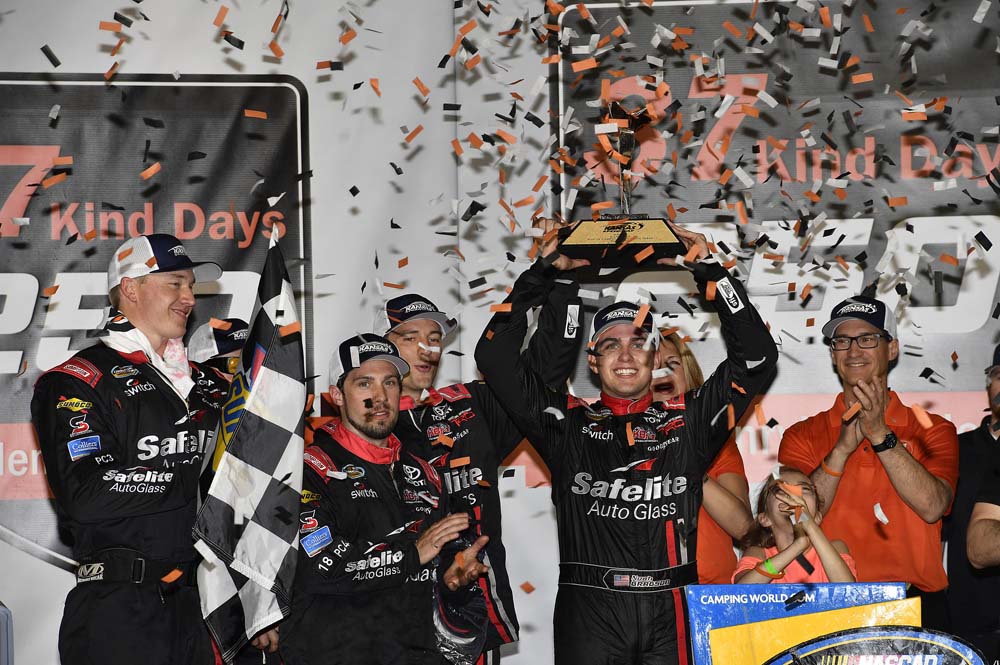 Noah Gragson captured the pole, led a race-high 128 laps and swept all three stages of the NASCAR Camping World Truck Series (NCWTS) 37 Kind Days 250 at Kansas Speedway in Kansas City Friday night. Gragson surrendered the lead to hit pit road for his final scheduled pit stop with 33 laps remaining and then had to watch varying pit strategies play out before finally regaining the lead with six laps remaining. Once out front, the 19-year-old was able to keep Kyle Busch in his rear-view mirror, crossing the finish line 1.558 seconds ahead of his team owner to pick up his first Truck Series victory of 2018 and the second of his career. 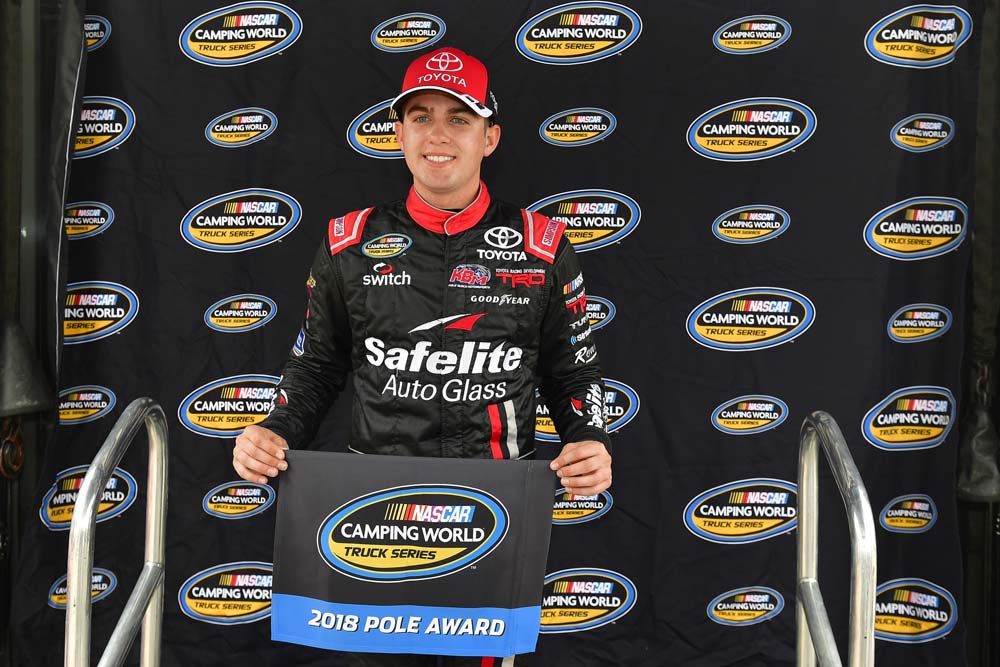 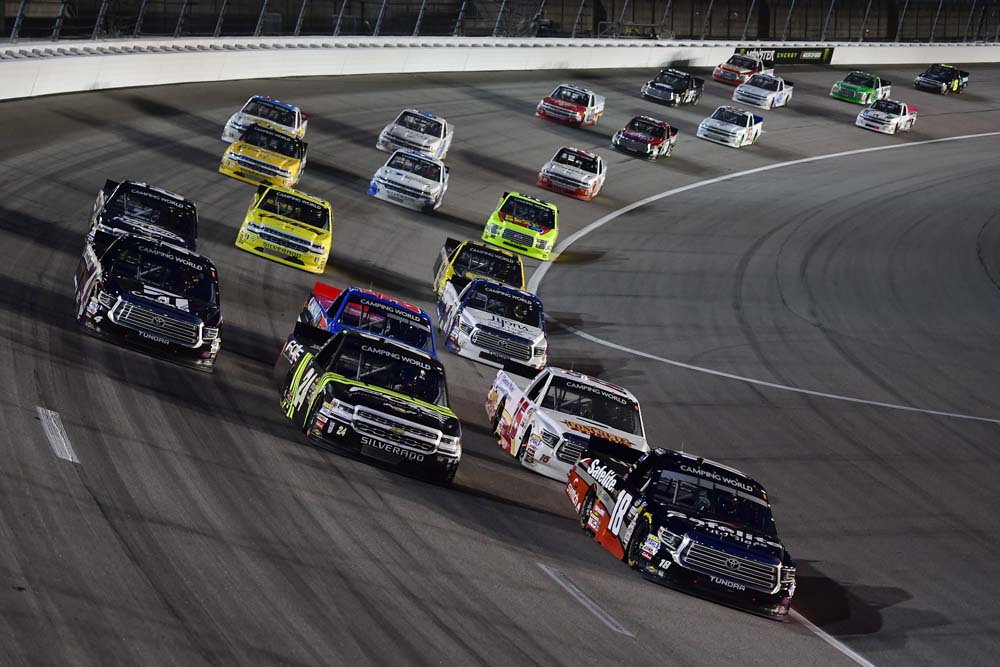 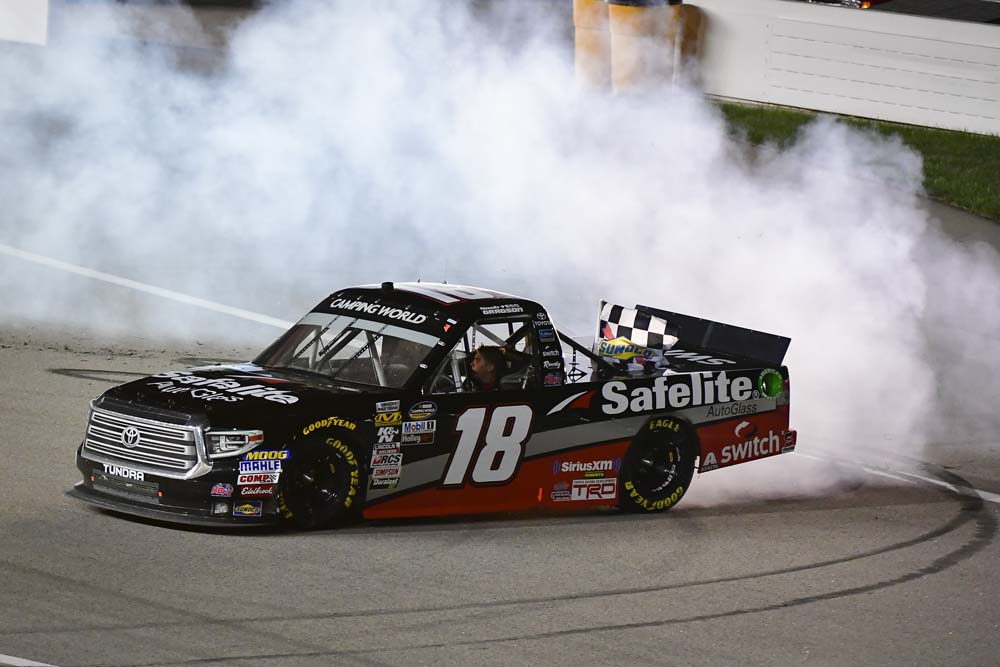 What does this win mean to you after everything you went through last week?

“This is such a relief for a driver that had a hard week last week battling for the win between myself and Johnny Sauter. We came back stronger this weekend with two consecutive poles in a row. Led the most laps today. Man, this is a pretty damn cool moment. I’m so thankful for everyone at Safelite, Switch, Toyota, TRD – everyone at KBM (Kyle Busch Motorsports), Samantha and Kyle Busch – my parents, my mom definitely. Happy Mother’s Day, mom. I know you’re watching in Italy with dad right now, I love you guys. Thank you so much for everything you do. It’s so awesome to get here with Safelite AutoGlass. First win of the year and we’re going to the playoffs and I can tell you there’s going to be a lot more wins this year with this group behind me. We had solid pit stops all day.”

What was it like taking four tires early and chasing down all the trucks to regain the lead?

“Man, I thought I came out of the pits and I thought I was going to be the leader. They told me that Johnny (Sauter) was stretching on fuel, so I thought maybe I’m running second. Then they said the 52 (Stewart Friesen) and 4 (Kyle Busch) were a half lap ahead and I thought that was for the lead. I passed the 4 and then I passed the 52 and then they said the 13 (Myatt Snider) is the leader. I was like, ‘Dang, how many leaders are there going to be?’ We made it happen there at the end. Solid pit crew. They did an amazing job with pit stops today. We executed perfectly today and we got the job done. Thanks to Safelite AutoGlass, Switch and Toyota for allowing this dream to happen.”

Did you have something to prove here today?

“You’re always going to have a bit of that chip on your shoulder. I was battling for the win last week and we were really fast. We had another Safelite AutoGlass Toyota Tundra last week and didn’t get the job done. I raced the Xfinity Series race and that really helped my confidence get back to where it needed to be and just being able to surround myself with everyone at Kyle Busch Motorsports. All the fans for being so supportive of me on Instagram, Twitter, Facebook. I got a lot of positive comments. I read all those comments, good or bad from the fans and they keep me going. There’s a little bit. I knew we had a fast Safelite AutoGlass Toyota Tundra. We sat on the pole. You always want to go into a race where you feel like you should have won the weekend before and you really want to go dominate that race all day long and I felt like that’s what we did today. I wouldn’t have had the opportunity without my team. They work so hard and bust their tails every single day. Just very fortunate.

Gragson moved up one position in the NCWTS Driver Championship standings to second. After six races the 19-year-old driver is 35 tallies behind championship leader Johnny Sauter. With the win Gragson earns a spot in the Truck Series playoffs. He has earned 10 playoff points this season, including the seven earned at Kansas Friday night.

Gragson will be back behind the wheel of the No. 18 Safelite AutoGlass Tundra when the Truck Series resumes action May 18 at Charlotte (N.C.) Motor Speedway. Live coverage of the North Carolina Education Lottery 200 begins Friday at 8:30 p.m. ET on FS1.