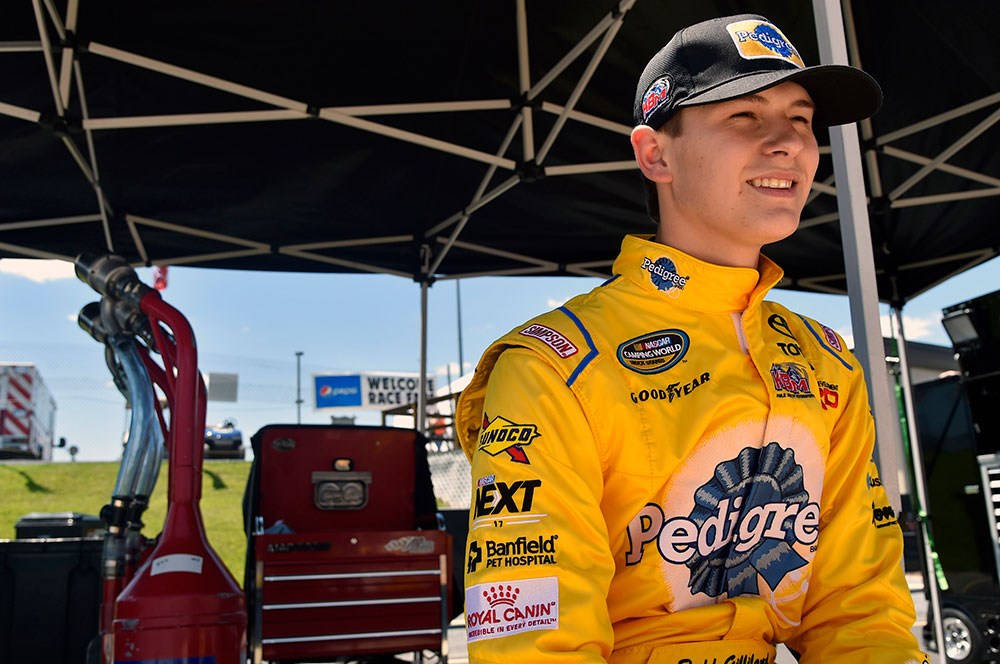 ● Todd Gilliland, driver of the No. 51 PEDIGREE® Toyota Tundra for Kyle Busch Motorsports (KBM), will make his second career start in NASCAR Camping World Truck Series competition this weekend in the Gateway 200 at Gateway Motorsports Park in Madison, Illinois. At 17 years of age, Gilliland is a third-generation driver and is the reigning NASCAR K&N Pro Series West champion.

● Driving the No. 46 PEDIGREE® Toyota Tundra for KBM, Gilliland made his Truck Series debut just two weeks ago at Dover (Del.) International Speedway. Gilliland was scored with a 20th-place finish after the right-front wheel broke on his Tundra 116 laps into the 200-lap event. Prior to the incident, Gilliland was holding his own in his Truck Series debut, competing among the top-10 and racing as high as second place in the running order.

● Saturday night’s Truck Series race is the second of six in which Gilliland will compete in 2017 for KBM. In addition to the races at Dover and Gateway, Gilliland is scheduled to race the No. 51 PEDIGREE® Tundra in events Sept. 3 at Canadian Tire Motorsports Park in Bowmanville, Ontario, Sept. 23 at New Hampshire Motor Speedway in Loudon, and Nov. 10 at Phoenix International Raceway. PEDIGREE® will also sponsor Gilliland’s race in the No. 46 Tundra Oct. 28 at Martinsville (Va.) Speedway.

What are your thoughts as you prepare to make your second career start in Camping World Truck Series competition and competing for the first time at Gateway Motorsports Park?

“I am super excited about driving the No. 51 PEDIGREE® Toyota Tundra at Gateway this weekend. This will be my first time racing at the track, but we tested there and so I am feeling confident about my performance. It is a cool racetrack. Turns one and two are really tight and turns three and four are wide open, so it will be a challenge. But I think we will be able to get it done.”

How much different does it feel going into this weekend with the first start in Truck Series competition out of the way versus making your debut like you did two weeks ago at Dover?

“I definitely feel a lot more confident going into the weekend at Gateway. I feel like I am a lot more familiar with all the formats, like practices and qualifying. I understand the way my truck works more now that I’ve gone through my first race at Dover. I’m really looking forward to working with the No. 51 team. They’ve been fast all season and I’m hoping I can continue that this weekend.”

What did you learn at Dover that will help you this weekend?

“I learned a lot at Dover that’s going to help me all season. It’s very important to have a good restart and hit your marks around the track. I learned more about the aerodynamics of the truck and how to pass people on the restart. I’m excited to take what I learned in my first race and apply it this weekend at Gateway and hopefully come out with a good finish.”