Fourth Win for Byron and Record-Breaking 51st for KBM 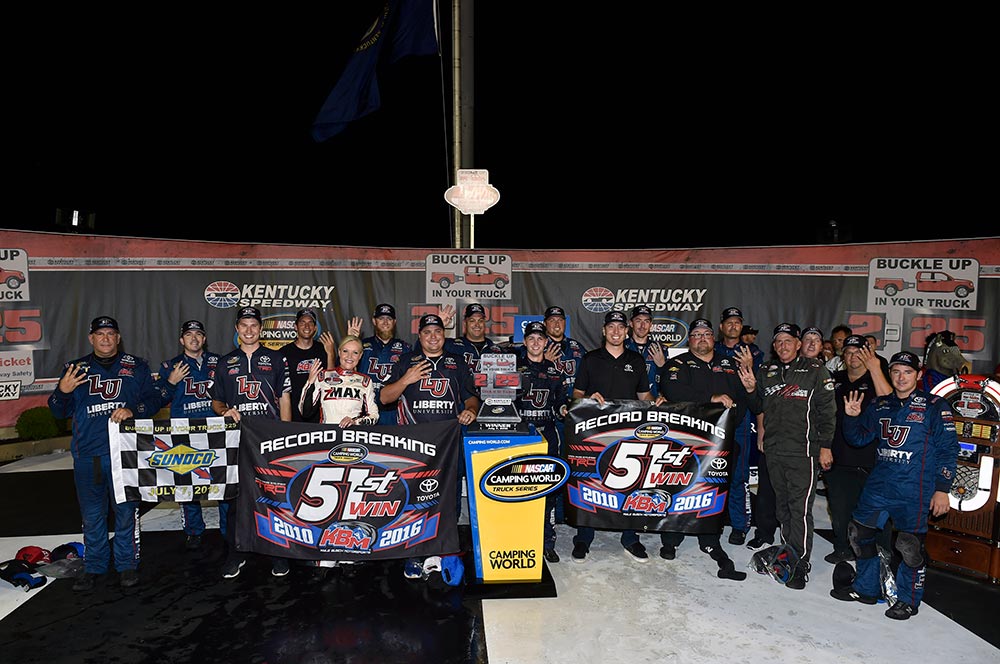 It was a great night for William Byron and the entire Kyle Busch Motorsports (KBM) organization on Thursday night at Kentucky Speedway. After taking the lead on lap 82 of 150, Byron held off some tough competition in the closing laps to win his fourth race of the 2016 NASCAR Camping World Truck Series season. The win was also the 51st win for KBM, which broke the existing record for most wins by a team in the Truck Series.

Byron started the race third and ran in second place much of the race. He fell back as far as eighth after a two-tire pit stop on lap 61 when several of the trucks in front of him were on different pit strategies. Byron’s strategy paid off since he patiently worked his way up, picking off his competitors one by one.

By lap 80 he was back in second place and took the lead on lap 82. One final caution slowed the field on lap 105, which brought Byron in for his final pit stop of the race. The crew gave him fresh right-side tires and sent him back out in first place.

With nine laps to go, Byron said the right-rear tire was starting to chatter. At the same time Daniel Hemric was closing in on his back bumper. John Hunter Nemechek got into the mix and battled Hemric for second place for several laps, which helped Byron pull away from the field and cross the finish line for his fourth victory of the season. 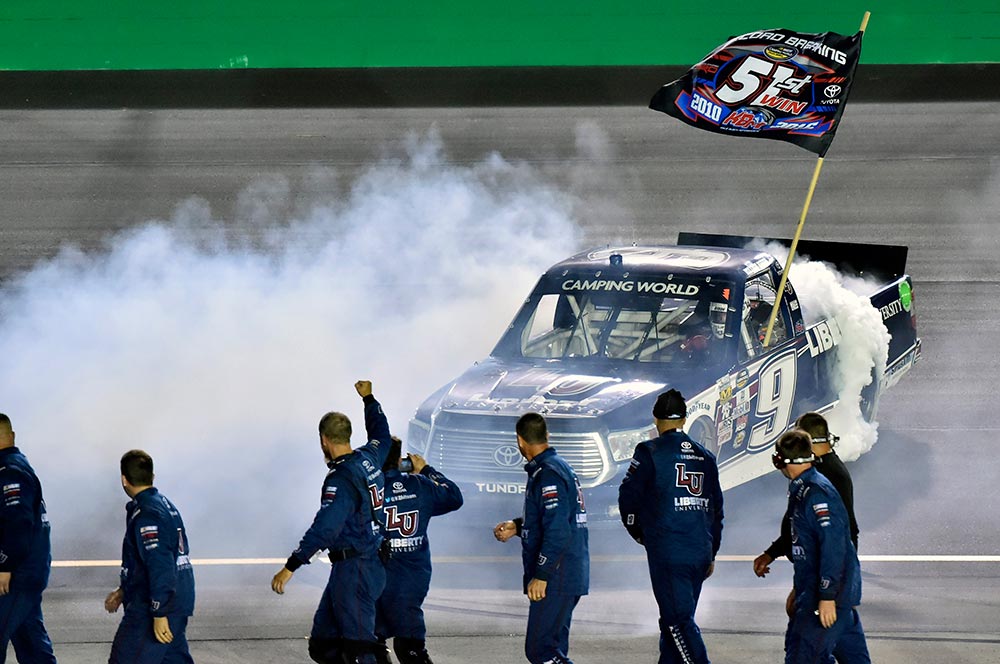 “I can’t say enough about this organization,” Byron said in Victory Lane. “It’s so awesome to have Kyle (Busch, owner) and Samantha’s support, Toyota’s support with great Toyota Tundras and great JGR (Joe Gibbs Racing) engines tonight. It’s a dream come true to get a win like this. It just keeps going, I have a great team behind me. I have to thank Liberty University and everyone that puts it together.

“The race was tough. I honestly felt like I had a right-rear tire going down. With the new surface it’s hard to get a tire to last that long. I had quite the vibration the last three or four laps. I was just hoping and praying that there would be no cautions. It was just a great run for us. Our Liberty University Tundra was really good tonight and we were able to stay out front that last run and that was the key.”

Following Byron across the finish line were Nemechek, Hemric, KBM’s Christopher Bell and Johnny Sauter rounded out the top five. KBM’s Daniel Suarez was 11th and driver-owner Kyle Busch was scored in 30th after an accident took him out of contention early in the race. Byron currently leads the rookie standings, as well as the driver point standings.

The Truck Series returns to action for a mid-week dirt race on Wednesday, July 20 at Eldora Speedway in Rossburg, Ohio. Live coverage of the Truck Series race will air on Fox Sports 1 at 9:00 p.m. ET.