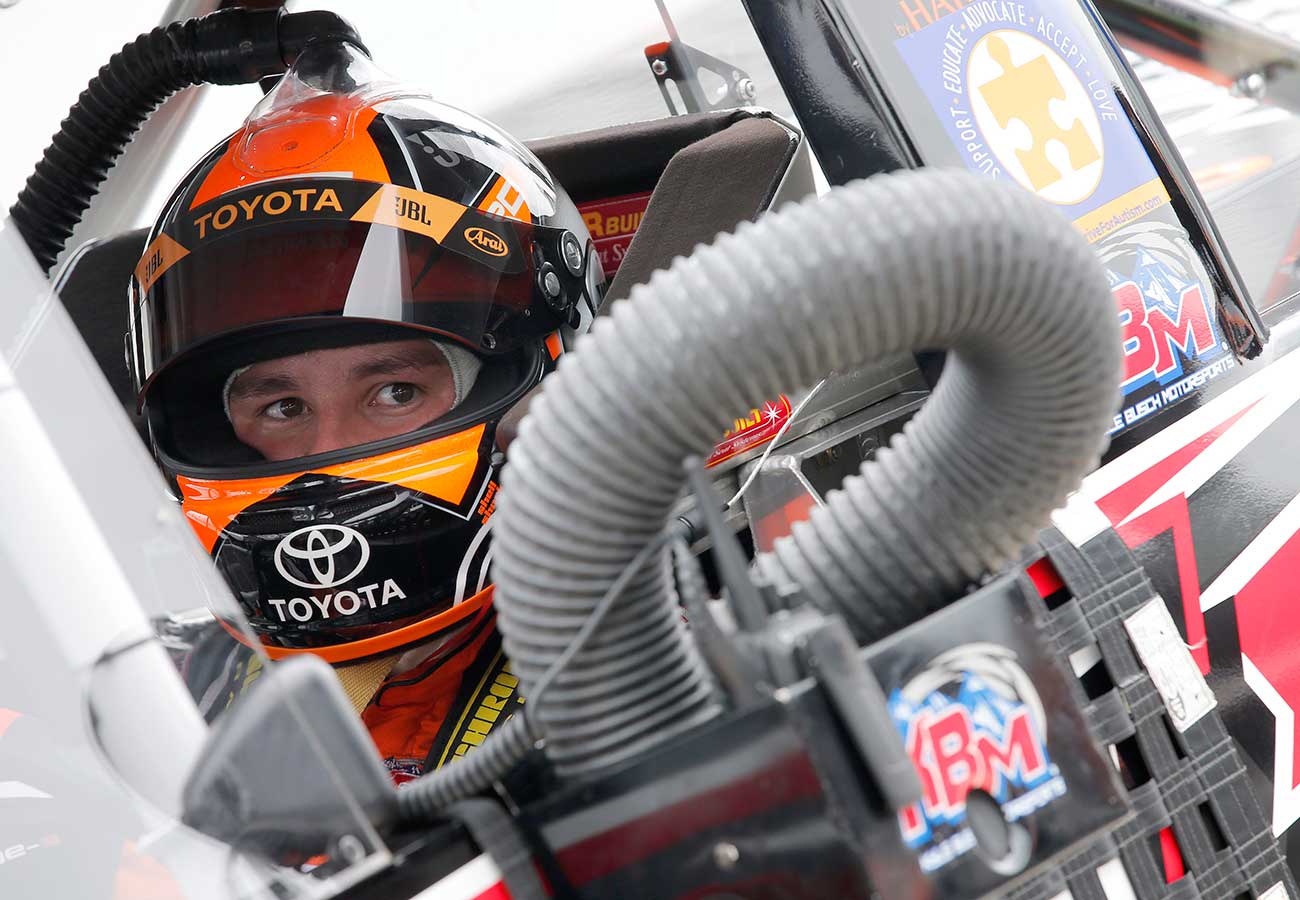 MOORESVILLE, N.C. (June 7, 2016) – Christopher Bell has been slithering in anticipation of Friday night’s Rattlesnake 400 at Texas Motor Speedway (TMS) in Fort Worth for multiple reasons. First of all, the mile-and-half track is located just 160 miles south of where he grew up in Norman, Okla., and serves as his homecoming race. Secondly, with an eighth-place finish in last year’s fall NASCAR Camping World Truck Series event at TMS under his snakeskin belt, it will be the first track on the 2016 Truck Series schedule that Sunoco Rookie of the Year contender will already have raced at when the haulers unload.

The 21-year-old wheelman, who cut his racing fangs on dirt in micro sprints in his home state of Oklahoma when he was six years old, will be making the 14th start of his NASCAR Camping World Truck Series career Friday. Bell burst onto the scene with a fifth-place finish in his series debut at Iowa Speedway in Newtown last June. Then in just his third series start, he led a race-high 106 laps en route to victory in the Mudsummer Classic at Eldora Speedway in Rossburg, Ohio. Combined in seven starts during the 2015 season, the open-wheel dirt standout posted two top-five and three top-10 finishes.

The Sunoco Rookie of the Year candidate has shown speed throughout the 2016 Truck Series season, but was snakebitten when it came to results early in the year. Bell was in a position for the win in the closing laps at both Daytona (Fla.) International Speedway and Atlanta (Ga.) Motor Speedway, but late-race accidents left him with undeserving results. Following another late-race accident and another subpar result at Martinsville (Va.) Speedway, he found himself 22nd in the Truck Series championship standings with a five-week break in the schedule to ponder a disappointing start to his first full-time season.

Fortunately for Bell, he was able to spend the downtime on the Truck Series schedule racing in other disciplines. A win in Kyle Busch Motorsports’ Super Late Model at Orange County Speedway in Rougemont, N.C., and another for Venturini Motorsports in the ARCA Racing Series at Salem (Ind.) Speedway helped improve his confidence and spurred improved results when he returned to his No. 4 Tundra. When the Truck Series resumed action, he posted a season-best fourth-place finish at Kansas Speedway in Kansas City, bettered it a week later with a third-place finish at Dover (Del.) International Speedway and picked up his third consecutive top-10 finish with an eighth-place result in the series last stop at Charlotte (N.C.) Motor Speedway (CMS).

Although the Truck Series hasn’t raced since May 21 at CMS, Bell has kept his skills sharp with plenty of seat time. He finished 10th in the first road-course start of his career in the ARCA Racing Series event at New Jersey Motorsports Park in Millville on May 28 and then toured several dirt tracks over the last week. The racing gypsy picked up a win May 29 in the NRA Sprint Invaders event at Eldora Speedway and then won June 3 in the USAC National Midget race at Bloomington (Ind.) during Indiana Midget Week.

With a total of 49 feature wins across a variety of racing disciplines since the start of the 2014 calendar year, Bell is no stranger to victory lane. Racing two hours from where he grew up Friday night, the Oklahoma native will be looking to pick up his first Truck Series win of 2016 and end the night in familiar surroundings celebrating with several friends and family that will be in attendance.

Are you looking forward to racing at Texas?
“Being from Oklahoma, Texas is as close to home as it gets on the NASCAR schedule, so it’s always great to get back that way. As a race car driver all you can ask for is to be able to move around and race multiple grooves and that is something that we are able to do at Texas. Not only is it a home race for me, it’s also a home race for the Tundra, since all of the production models are made at Toyota’s manufacturing facility in San Antonio, so it would be a really cool place to pick up a win.”

Are you looking forward to competing at a track you’ve raced at before in the Truck Series?
“Last year I raced seven times on a variety of tracks, but I didn’t start until the middle of the season, so this year all of the tracks we’ve been to have been new to me. Texas will be the first track that I’ll be going to that I raced at last year, so I’m really looking forward to it. It’s one of my favorite race tracks on the schedule and we’re coming off three solid runs, so I’m expecting to have another fast JBL Tundra this weekend and feel like that we will be able to run up front and compete for the win.”

Are you looking forward to this week’s race at Texas?
“I’m really looking forward to getting to Texas this week. We finished second with Daniel (Suarez) in both Texas races last year, so I feel like we have a good baseline setup to unload with. We are taking our newest Tundra, KBM-39, which we turned around quickly after racing it for the first time at Charlotte. The truck showed some good speed and Christopher did a really good job of bouncing back and getting another top 10 after we had some issues in the middle of the race. Even though the Truck Series has been off for a few weeks, Christopher’s been racing a lot of other stuff and getting lots of seat time — which is good for a young driver. Coming over from the dirt stuff, the mile-and-a-half tracks that you can move around on seem to really fit his driving style, so I feel like we have a really good shot to run up front and compete for the win Friday night.”

KBM-39: The No. 4 Toyota Racing team will unload KBM-39, for Friday’s Rattlesnake 400 at Texas Motor Speedway in Fort Worth. It is the same Tundra that Bell recorded an eighth-place finish with May 21 at Charlotte (N.C.) Motor Speedway.

The Book on Baxter:
Veteran crew chief Jerry Baxter is in his fourth season atop the pit box for KBM. Since joining KBM, Baxter’s drivers have posted seven wins, three poles, 1218 laps led, 26 top-five and 42 top-10 finishes across 72 starts. The California native spent the 2015 season calling the shots for KBM’s No. 51 team, which collected two wins, 10 top-five and 14 top-10 finishes with drivers Daniel Suarez (12 starts), Matt Tifft (six starts), Kyle Busch (three starts), and Christopher Bell (one start) behind the wheel. In addition to his seven wins at KBM, he boasts one other Truck Series win (Cale Gale, 2012) and one NASCAR XFINITY Series win (David Reutimann, 2007).

Baxter’s Truck Series drivers have produced two top-five and five top-10 finishes resulting in an average finish of 10.0 across seven starts in the Lone Star State. Daniel Suarez finished second in both the June and November races at Texas last season.