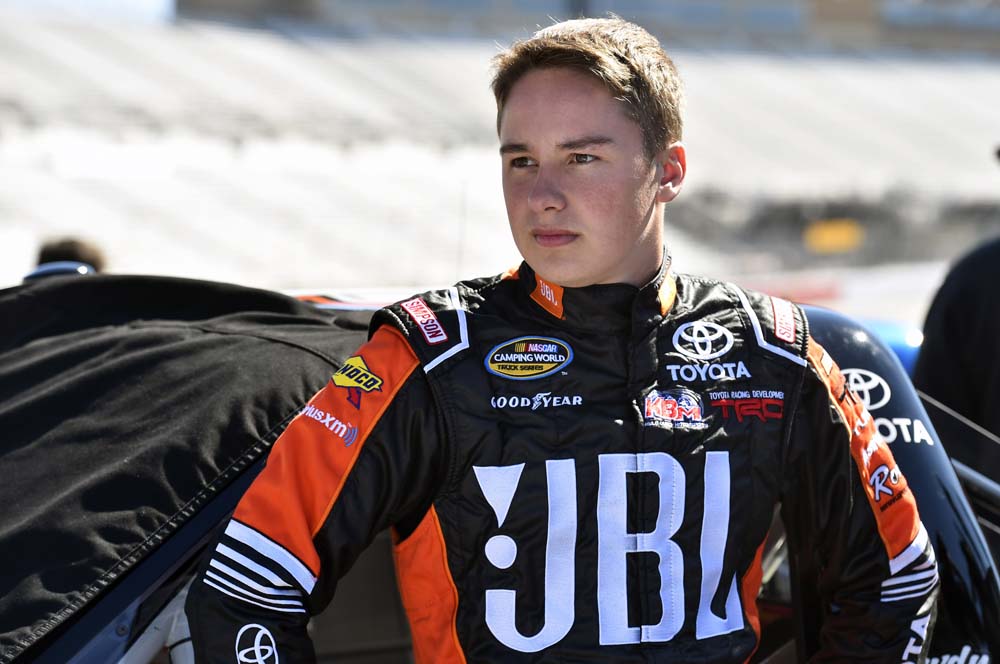 MOORESVILLE, N.C. (March 28, 2017) – While most of the drivers in Saturday’s Alpha Energy Solutions 250 at Martinsville (Va.) Speedway NASCAR Camping World Truck Series (NCWTS) event will be strapping into a race vehicle for just the third time this season, Christopher Bell will be looking to earn his fifth overall victory already in 2017.

Bell opened up the 2017 season by fulfilling a childhood dream when he won the prestigious Chili Bowl Midget Nationals at Tulsa Expo Raceway in his home state of Oklahoma and has parlayed the momentum of his historic victory win into a hot start in the Truck Series. The 22-year-old survived a pair of accidents in the season-opening event at Daytona (Fla.) International Speedway and was able to bring his battered JBL Tundra home to an eighth-place finish. One week later he dominated the second event on the NCWTS schedule as he captured the pole, led 99 of the 130 laps at Atlanta Motor Speedway and became the first driver in one of NASCAR’s National Series to sweep all three stages of a race under the new race format.

After two races, Bell leads the Truck Series point standings and also paces the series in driver rating (124.0) and laps led (105). Not only has the No. 4 Tundra been at the front of the field, it’s been the fast truck on the track for a remarkable 35.6 percent (58) of the 163 green-flag laps run in the first two events of the season.

Saturday’s 250-lap event will be Bell’s third start at Martinsville. In his debut at ‘The Paperclip’ last spring, he started from the 15th spot, had an average running position of 15.1 and ended the day with a 19th-place finish. He showed great improvement in the fall race, qualifying fifth, posting an average running position of 5.7 and clocking out of the Virginia track with a fourth-place finish.

Despite the Truck Series being on a hiatus of nearly a month, Bell has padded his win total on dirt. The talented youngster returned to the dirt track where he cut his racing teeth, I-44 Riverside Speedway in Oklahoma City, Okla., last weekend for the Fourth Annual Turnpike Challenge. Rained washed away Friday night’s feature, but set up a double dip on Saturday. In the first 30-lap feature, he charged to the front from the ninth position and won in dominant fashion. In the nightcap, the Toyota Racing driver started from the second spot, worked his way around pole sitter Zach Daum with 12 laps remaining and remained out front the rest of the way en route to completing the daily double.

For as well as 2017 has started, Bell would be the perfect poster child for team owner Kyle Busch’s ‘Everything is Great’ t-shirts. He’s hoping that he can continue his winning ways on Saturday and add an iconic Martinsville grandfather clock to his ever-growing collection of trophies.

Will having a win under your belt change how you approach the rest of the regular season?
“Having a win will make these races a lot less stressful for me. As far as my approach, I don’t feel like it will be any different — I’m out there to get a win if possible and if not, get the best finish that I can. I think it may change Rudy’s (Fugle, crew chief) approach, because it will allow him to be more aggressive with his strategy. I feel like both Rudy and myself are well prepared for this race and we’re going to go out and do everything we can to put the JBL Tundra in victory lane Saturday.”

Is Martinsville a tough track to adapt to for a young driver?
“The more seat time you have the better off you are, so I’m looking forward to going back to Martinsville for a third time. It’s a tough track because it’s very unique — there’s nothing else out there like it. It’s a short track, it’s really small, there are a lot of vehicles out there on the track and because of all of that it’s pretty easy to get roughed up. You have to make sure you run a smart race yourself, but you also have to be extra careful of what the other drivers are doing around you because the quarters are so tight.”

Will having a win under your belt change how you approach the rest of the regular season?
“The good part for us is that how you collect the playoff points is normally how we already race every week. We try to go out and win the pole, lead as many laps as we can and win every race — so the new system doesn’t really change that approach. There is definitely going to be an effort to get a playoff point here and there, but it should play into how we planned on racing anyways.”

KBM-31: The No. 4 JBL Racing team will unload KBM-31 for Saturday’s Alpha Energy Solutions 250 at Martinsville (Va.) Speedway. It is the same Tundra that William Byron finished third with in last year’s spring race at Martinsville and was victorious with last June at Iowa Speedway in Newton.

The Fugle File:
Ryan “Rudy” Fugle begins his fourth season as a crew chief at KBM and sixth overall with the organization. The New York native has guided his team to an Owner’s championship in all three of his seasons (2013, 2015 & 2016) atop the pit box at KBM, including a combined Owner’s/Driver’s Championship with Erik Jones in 2015. His drivers have combined for 17 wins, 10 poles and 34 top-five finishes across his 70 races calling the shots for the organization. Under his tutelage last season, William Byron collected a Truck Series’ rookie record seven wins while leading the No. 9 Tundra team to KBM’s fourth consecutive and fifth overall Owner’s championship.

Fugle’s NCWTS drivers have posted one pole (Denny Hamlin, 2013), two top-five and six top-10 finishes resulting in an average finish of 10.1 across seven starts at Martinsville. His drivers have finished inside the top 10 in all six starts as a crew chief at KBM, including a pair of third-place finishes with Erik Jones (2015) and William Byron (2016) in the last two spring events at the Virginia track.