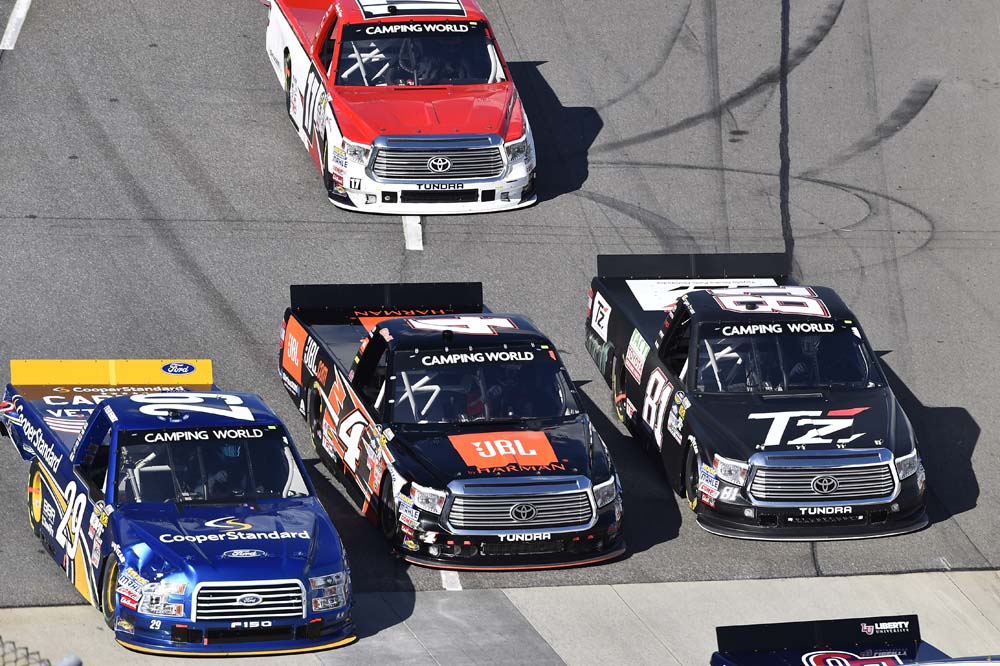 Christopher Bell’s first start at Martinsville (Va.) was an eventful one. Just as the talented youngster was getting a feel for how to get around the challenging .526-mile oval he got a pit road penalty for driving through too many pit stalls while trying to avoid another competitor exiting his stall. Bell was able to overcome the penalty and subsequent transmission issues in the second half of the race to be in a position for a top-10 finish late in the race, until he was turned from behind when things got bottled up with several trucks fighting for position with 14 laps remaining.

The incident caused major damage to the rear of the JBL Tundra, but the over-the-wall crew was able to make quick repairs and keep Bell on the lead lap. With five laps remaining, he got caught up in another accident that cause a flat left-right rear tire. After visiting pit road for fresh left side tires, he returned to the track for overtime and ended the race in the 19th position.

“Martinsville is a really tough track to get a feel for, it’ s a lot different than what I grew up racing on,” Bell said. “I think about the halfway mark of the race I finally got going pretty good and we were able to make some progress during the green-flag runs, but it seemed like every time that there was a caution we ended up starting on the outside lane and would lose everything we gained and then some. Despite some issues with the transmission, we were in a position to salvage a good finish until we got turned near the end of the race. The guys on the JBL team did a good job of making some quick repairs so that we could at least finish all the laps there at the end despite having a pretty torn up Tundra.”

Bell narrowly missed advancing to the final round of knockout qualifying, earning the 14th starting position for the 250-lap race. The Oklahoma native battled a loose-handling JBL Tundra in the early stages of the race and was scored in the 15th spot when a one-truck accident brought out the first caution of the race on lap 43. Crew chief Jerry Baxter summoned his young driver to pit road, where the over-the -wall crew put on four fresh tires, made a chassis adjustment, filled the truck with fuel and returned the No. 4 Toyota to the track in the 12th spot.

Having to start in the outside lane, Bell fell back to the 19th position before he could find a hole on the inside lane. When the second caution of the race occurred on lap 92, the JBL Tundra visited pit road for a full tank of fuel and a major trackbar adjustment to try and improve what was now a tight-handling truck.

With not taking tires, the No. 4 Toyota took the ensuing restart from the fifth position, but trucks on fresher tires began working their way around Bell. He was scored in the 15th position when the third caution of the race occurred on lap 134. After visiting pit road for four tires and fuel, Bell was ticketed with the pit road penalty and per NASCAR rules restarted at the tail end of the field.

A lap-163 caution allowed the JBL team to visit pit road for a full tank of fuel and remove tap from the grill. He was running 11th when the next caution occurred on lap 185 and Baxter elected to come down pit road for the final set of fresh tires. Bell took the lap-191 restart from the 18th position. He had advanced up to the 14th position when the eighth caution of the race flew on lap 224.

Bell was in 12th and working his way towards a top-10 finish with just under 20 laps remaining. Things got bottled up with competitors beating, banging and gouging for position, which ultimately led to the JBL Tundra getting clipped in the left rear and shooting up the track coming to rest on the outside wall off the frontstretch. Despite the accident, the JBL Tundra team was able to make repairs and were able to finish the race in the 19th spot.

Bell’s boss, Kyle Busch, picked up his first Truck Series victory of 2016 and first win in any series at Martinsville. John Hunter Nemechek finished 0.425 seconds behind Busch in the runner-up position. William Byron in the KBM No. 9 Liberty Tundra came home third, while Kyle Larson and Timothy Peters rounded out the top-five finishers. Daniel Suarez came home 18th in KBM’s No. 51 ARRIS Tundra.

The third race of the 2016 season featured 11 cautions for a total of 68 laps. There were eight lead changes among four drivers. With three races complete, Bell sits 22nd in the Truck Series championship standings.

Bell will return to the No. 4 JBL Tundra when the Truck Series resumes action May 6 at Kansas Speedway in Kansas City. Live coverage of the Toyota Tundra 250 begins with the NCWTS Setup Show at 8 p.m. ET.