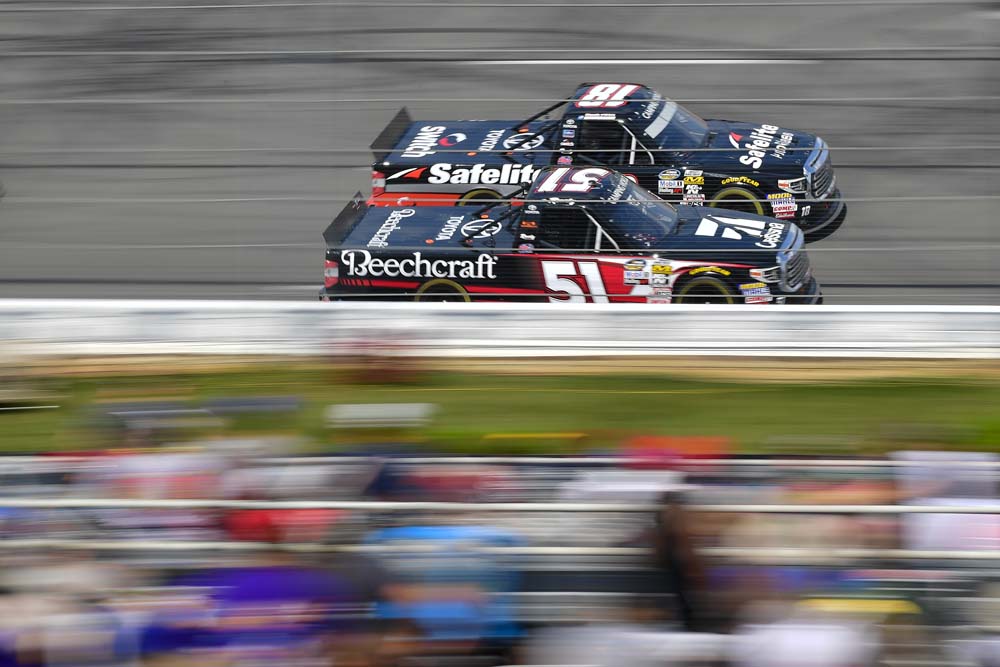 After Noah Gragson was not cleared to race by NASCAR following a trip to the infield care center during qualifying to address a stomach virus, 2015 NASCAR Camping World Truck Series champion Erik Jones strapped into the Safelite AutoGlass Tundra on short notice and produced a runner-up finish for the No. 18 team in Saturday’s Gander Outdoors 150 at Pocono Raceway. Jones started from the 31st position but quickly maneuvered his way through the field and nearly ended the day in victory lane with a strong Tundra that Gragson was fastest with in Friday’s final practice session.

The Safelite AutoGlass Tundra was scored in the third position when the Final Stage went green but after a hard-fought battle to get into the runner-up position, Jones found himself over two seconds behind his teammate and owner Kyle Busch with 19 laps remaining. The pupil ran down the teacher and was able to attempt a pass for the lead with nine laps remaining but his momentum was impeded by a lap truck and after having to fall back in behind Busch ended up finishing 1.469 seconds behind him.

Despite missing the race, Gragson remained second in the Truck Series regular season point standings and will be granted a medical waiver from NASCAR to remain eligible for the playoffs. 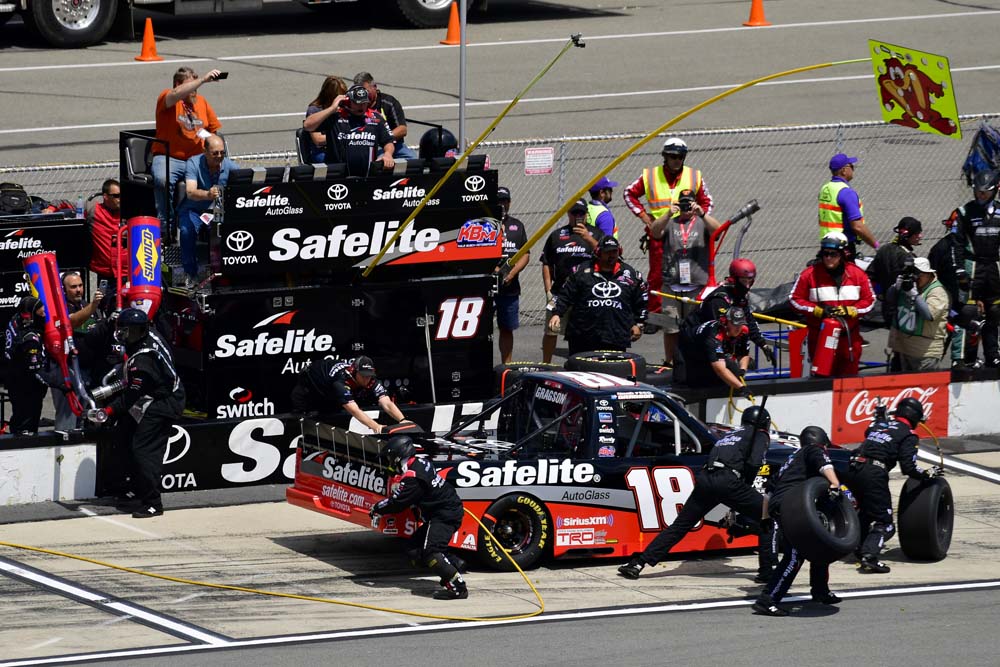 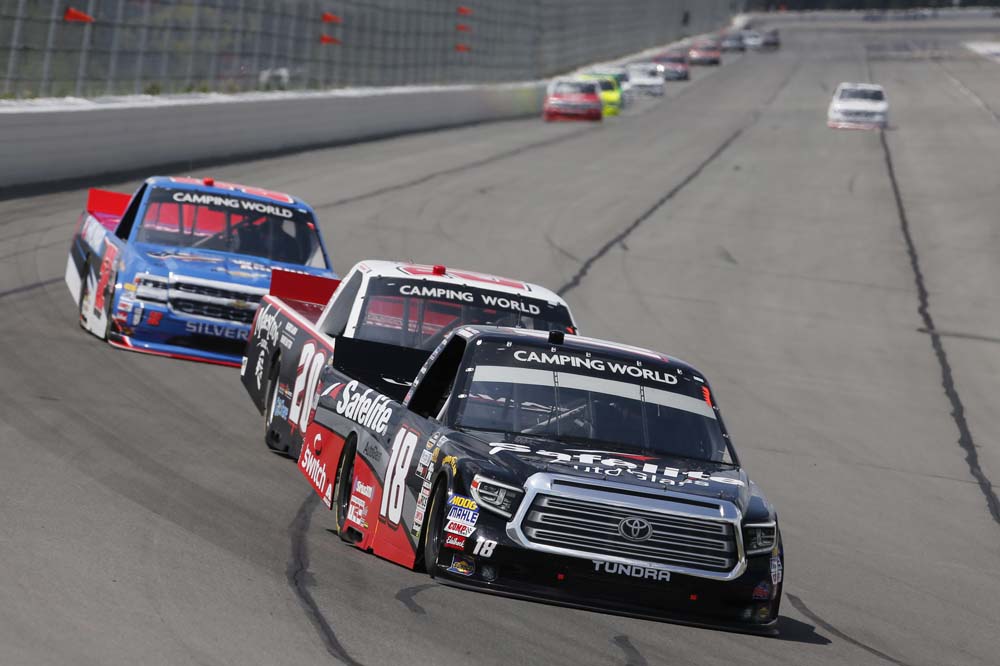 Erik Jones, driver of the No. 18 Safelite AutoGlass Tundra for Kyle Busch Motorsports:

How was it jumping in the Tundra on the fly?

“Yeah, I mean, it was definitely a surprise, you know? I didn’t think that I’d be running a Truck race today, but it was fun. Hoped in after final practice and got the final fitment done in the seat and everything and it – it was a little snug. Noah’s (Gragson) a little smaller than me I believe, but it was close and we went out and the truck was great. I mean, I asked Rudy (Fugle) – I said, ‘You know, driving this thing today, did you at least give me a pretty good truck,’ and he was like, ‘Yeah, I think it’s pretty fast,’ so definitely had good speed and I think really if we could have gotten out front at the end, we would have – we probably could held Kyle (Busch) off, but just got stuck on the bottom on that restart and lost a couple spots and just took too long to get through traffic to go up and challenge, but it was a fun day.”

How difficult is it to mentally prepare for a race in a hurry?

“I think I first found out maybe after the first practice – just before second practice, final practice today – but, I mean, yeah. You’re definitely changing your mindset getting into a Truck race. I was planning on probably going back and taking a nap and catching the end of the Truck race, so, you know, had to really kind of reset and try to think back. I don’t really have any notes with me here on Truck racing and had to think back to what I did here I guess three years ago in the trucks, so just trying to remember that and, you know, talked to Kyle (Busch) a little before the race, looked at some old data that I had from a test here a few years ago and just tried to refresh my memory and get in the mode of what we had to do. I knew it was going to be a little challenging coming from the back and obviously not being in the truck all day I didn’t know how it drove. I don’t know how Noah (Gragson) drives his trucks and so it was a lot of things that go through your head, but we had a great truck. We fired off and it was very quick and we were able to get up to the front pretty fast.” 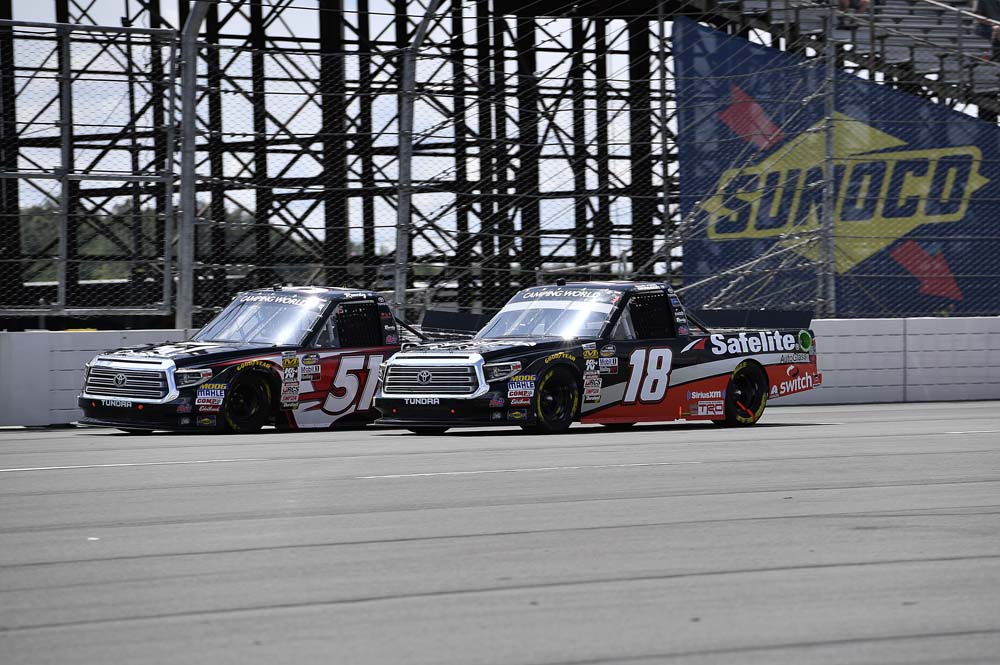 Gragson will be back behind the wheel of the No. 18 Safelite AutoGlass Tundra when the Truck Series resumes action Aug. 11 at Michigan International Speedway in Brooklyn, Pa. Live coverage of Corrigan Oil 200 begins Saturday at 1 p.m. ET on FS1.