Eighteen-year-old Gragson Has Big Plans for 2017 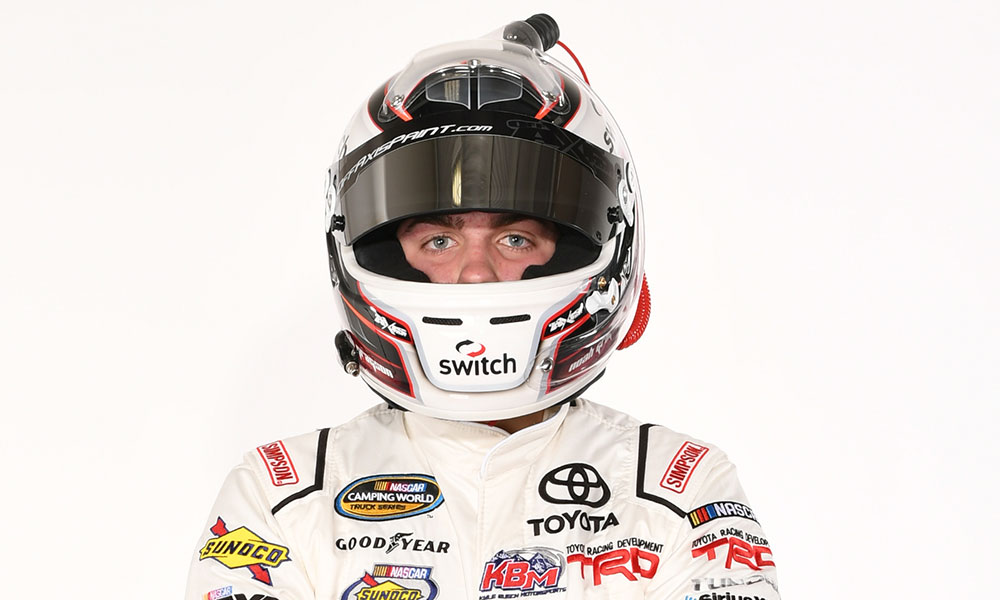 MOORESVILLE, N.C. (Feb. 21, 2017) – Noah Gragson will kick off his rookie season in the NASCAR Camping World Truck Series (NCWTS) Friday night under the lights at Daytona (Fla.) International Speedway in the NextEra Energy Resources 250. This will be Gragson’s first season at Kyle Busch Motorsports (KBM) and he hopes to follow in the footsteps of many other exceptional rookies like Erik Jones and William Byron who have added to KBM’s trophy case.

To prepare for this season, Gragson made two NCWTS starts at the end of 2016 at Phoenix (Ariz.) International Raceway and Homestead-Miami (Fla.) Speedway, where he finished 16th and 15th respectively. By completing all the laps, he was able to get a head start on learning the unique characteristics of the truck’s aerodynamics on bigger tracks

Veteran crew chief Marcus Richmond was added to the No. 18 Switch team’s roster in late 2016 to mentor and coach the young driver from atop the pit box. The team tested for one day at Atlanta (Ga.) Motor Speedway in January to give Gragson more experience on an intermediate track and help the crew hone their communication skills with a new driver and crew chief. Five members of this year’s No. 18 Switch team were a part of last year’s No. 4 Tundra team which collected one win, 197 laps led, nine top-five and 17 top-10 finishes across 23 starts last season and made the inaugural Championship Four in the Chase with Christopher Bell.

Gragson made his Daytona debut last weekend in the ARCA Racing Series. Driving for Venturini Motorsports, Gragson did not have the easiest weekend, but made the best of it by completing the race and gaining valuable experience. After being fastest in practice earlier in the week, Gragson failed to make a qualifying lap due to a mechanical issue which forced him to start in the back. Once the race was underway, he experienced a part failure which sent him to the pits for seven laps for repairs. He finished the race in 26th place and although it was not the finish he wanted, it was an opportunity to learn.

When the NCWTS hits the track, Gragson will also be sporting the colors of a new sponsor. Switch, headquartered in Las Vegas, designs, builds and operates world-renowned data centers where clients from all over the world rely on its mission-critical facilities and technology ecosystems to power their businesses. Gragson is excited to have them on board with him and hopes to take them to Victory Lane Friday.

What are your thoughts on the new segment format for the Truck Series?

“I think the new segment format will create a lot of change. We’re not really going to know what the racing will be like until we run Daytona, but I think it’s going to create different strategies, the drivers are going to have to get what they can 100 percent of the time. There’s no riding around at a place like Daytona, you have to stay up front since each segment is worth points now. It will force drivers to be more aggressive earlier in the races.”

How much did the ARCA race last weekend help prepare you for the truck race at Daytona?

“The ARCA race helped me quite a bit. We didn’t get the finish I think we deserved as a team since we were fastest in the test and in practice, but we had some bad luck and had to battle some adversity throughout qualifying and the race. At least we finished the race. I just wanted to stay out there and keep learning as much as I could in the draft. We kind of hung out in the back all day, but toward the last quarter of the race I got up in the mix and started experiencing what the draft felt like. It helped me learn how to maneuver my Toyota through the pack and see where the most momentum was with each line. I definitely gained some valuable experience and boosted my confidence which will help me Friday night.”

What do you think will be your biggest challenge running the full NCWTS schedule?

“I think the biggest challenge is going to be learning how to race on the intermediate tracks where aero is so important on these trucks. You have to position yourself where you need to be. You can’t get right behind another truck because your truck won’t handle very well. I’m used to short track racing where you can run right behind someone, but now with the aero you can’t do that, so just figuring out how the aero affects the trucks. Experiencing a variety of tracks from Daytona, to Eldora, to a road course and everything in between will be a big learning curve for me, but I’m ready to take on the challenge.”

How will the new racing segments change your strategy this season?

“I feel like the strategy will be quite a bit different from the caution clock. With 20, 20 and 60 laps, it’s going to allow us to pit again. There will be some strategy played with some fuel-only stops and maybe taking right-side tires early to get that over with, and by the end of the night hopefully we are up front.”

What are your expectations for Noah at Daytona?

“Honestly, I think we need to come out of there with a top-10 finish. If we can leave Daytona with no damage and a top 10 that will help us get the season kicked off and anything better than that would be awesome.”

KBM-040: The No. 18 Switch team will race KBM-040, for Friday’s NextEra Energy 250 at Daytona International Speedway. Christopher Bell raced this Tundra at Talladega last fall where he finished sixth.

Richmond’s Record:
Marcus Richmond has collected nine wins, 11 poles, 52 top-five and 107 top-10 finishes across 222 races in his 11 seasons as a crew chief in the Truck Series. The veteran crew chief has been to victory lane with five different drivers (Ty Dillon, Kevin Harvick, Timothy Peters, Johnny Sauter and Dennis Setzer) and has recorded at least one win every year since 2012. The North Carolina native’s drivers have finished inside the top five in the Truck Series championship standings four times in the last five seasons, including a runner-up finish in the standings with Ty Dillon in 2012. His most recent stop was at JR Motorsports last season, where he guided Cole Custer to two poles, four top-five and 12 top-10 finishes over the last 16 races of 2016. Richmond joined KBM in December 2016 to coach rookie Noah Gragson in 2017.

Richmond won last year’s Daytona race with Sauter, and was Timothy Peters’ crew chief in 2014 when Kyle Busch beat him to the finish line by .016 seconds.