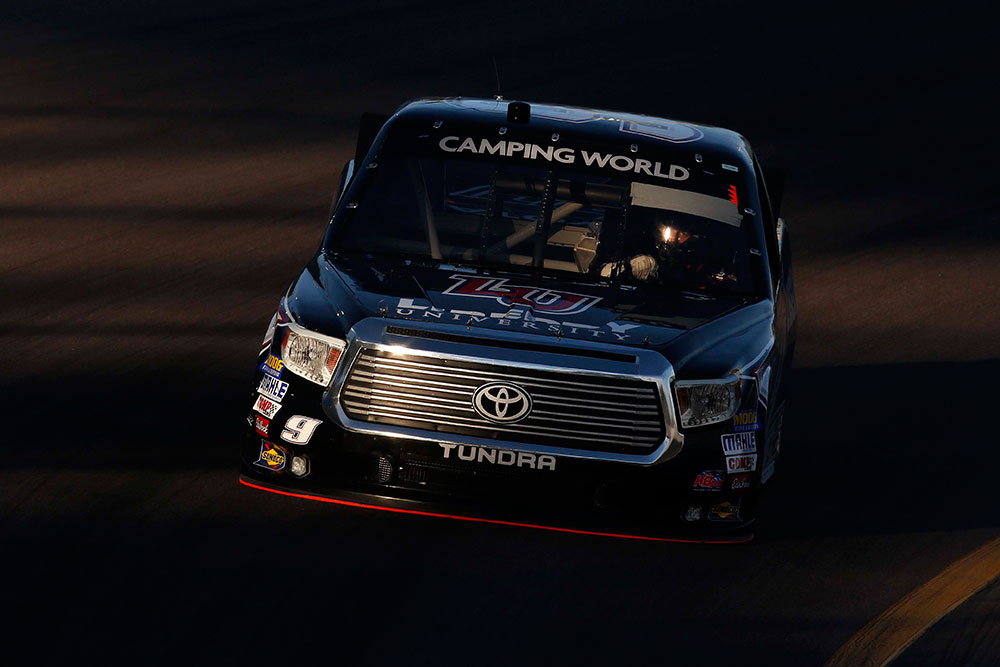 MOORESVILLE, N.C. (Feb. 16, 2016) – William Byron will kick off his rookie season in the NASCAR Camping World Truck Series (NCWTS) Friday night under the lights at Daytona (Fla.) International Speedway in the NextEra Energy Resources 250. After winning the NASCAR K&N Series East championship in 2015, Byron joined another championship team, Kyle Busch Motorsports to further his racing success. Byron will drive the No. 9 Liberty University Tundra full time in 2016 while competing not only for the Sunoco Rookie of the Year championship, but also the series championship under the new Chase format.

Byron made his debut at Daytona last weekend in the ARCA Racing Series. Driving for Venturini Motorsports, Byron qualified second and finished second in the very first restrictor-plate race of his short driving career. Byron was able to run up front much of the race, but pit strategy shuffled him back in the field mid-race. With patience and skill, he was able to work his way through the draft back to the front of the field for a podium finish. The strong finish helped him earn approval from NASCAR to compete at Daytona again Friday night in the NCWTS race.

This season Byron will have the benefit of working with the 2015 NCWTS championship team led by crew chief Rudy Fugle. Ten members of this year’s No. 9 Tundra team were a part of last year’s No. 4 Tundra team with Erik Jones, which collected three wins, five poles, 925 laps led, 11 top-five and 20 top-10 finishes across 23 starts last season and captured the 2015 NCWTS Driver’s and Owner’s Championship.

Racing is not the only thing on Byron’s plate. He is currently in his senior year at Charlotte (N.C.) Country Day and is taking college courses online through Liberty University Online Academy. Once he graduates from high school in the spring, his plan is to pursue a business degree at Liberty while advancing his racing career. More than 13,500 students attend classes on Liberty’s campus in the Blue Ridge Mountains of Lynchburg, Va., and more than 95,000 students are enrolled in Liberty’s online program.

What are your thoughts on the new Chase format for the Truck Series?

“I think the new Chase format is a great thing for me because it gives me time to experiment and learn before I get to the final seven races. The early part of the season will be a learning curve, especially going to new tracks where I haven’t raced before, but by the end of the season hopefully we will be in a position to compete for a championship.”

How much did the ARCA race last weekend help prepare you for the truck race at Daytona?

“The ARCA race helped me learn the draft and experience Daytona for the first time. Restrictor-plate racing is entirely new to me, so it was great experience. I know racing the trucks will be very different because of the aerodynamics, but getting experience in the draft will be very helpful when I get on track in my Liberty University Tundra Thursday afternoon.”

What do you think will be your biggest challenge running the full NCWTS schedule?

“I think the biggest challenge will be going to a variety of different race tracks each week. But honestly, I’m so ready to run a full season and I can’t wait to see what we can accomplish. Having Rudy (Fugle, crew chief) and Kyle Busch to ask for advice will definitely help me throughout the year.”

How will the new Chase format benefit William?

“The format is going to be perfect for us. It makes the first half of the year less stressful because William can spend time learning in the seat. I think it will help him take less chances and bring home good finishes when he might have made a mistake trying to finish fifth when he should have finished eighth. You live and you learn for the next week and it’s all about being in the top eight in the points, or getting a win to get in the Chase. I definitely think by the time we get five or six races under our belts he’ll be ready to win races, not right away. That experience we can gain at the beginning the year will get him rolling.”

KBM-013: The No. 9 Liberty University team will race KBM-013, for Friday’s NextEra Energy 250 at Daytona International Speedway. Kyle Busch won with this Tundra at Daytona in 2014, while Erik Jones drove it to a second-place finish in last year’s season opener.

Fugle begins his third season as a crew chief at KBM and fifth overall with the team. Under his tutelage last season, Erik Jones posted three wins, five poles, 925 laps led, 11 top-five and 20 top-10 finishes en route to becoming the youngest champion in Truck Series history and the first driver to collect both the Rookie of the Year and the series title in the same year. The duo also nabbed KBM its record-breaking fourth Truck Series Owner’s championship last season, which was the second with Fugle calling the shots. In 2013, he led KBM’s No. 51 Tundra team to a series-leading six wins and an Owner’s Championship. The New York native’s Truck Series drivers have totaled nine wins, six poles, 21 top-five and 35 top-10 finishes across his 44 races atop the pit box for KBM.

Fugle has one top-five finish as a crew chief in two starts at Daytona. Erik Jones placed second last year in an exciting finish with Fugle atop the pit box.