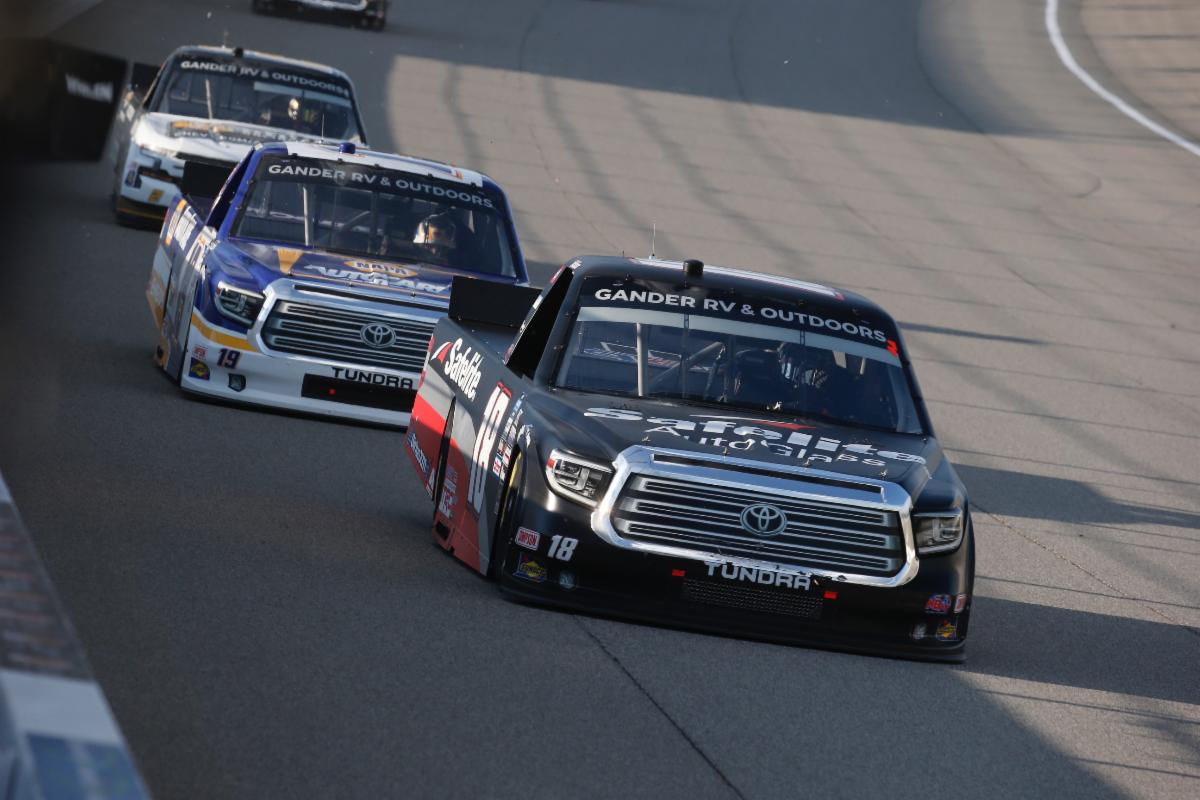 Christian Eckes and the No. 18 Safelite AutoGlass team keep knocking on the door of victory but once again the Sunoco Rookie of the Year Contender came up just short of earning his first NASCAR Gander RV & Outdoors Truck Series victory Friday at Michigan International Speedway. Three of the top four trucks got together and washed down the track on the restart in the second overtime, but it didn’t bring out a caution and allowed Eckes who started in the second row on the inside lane to emerge with the lead.

Eckes would take the white flag with the lead, but eventual winner Zane Smith was able to make a maneuver for the lead through Turns 1 and 2 on the final lap and hold off Eckes’ attempt at a crossover move. Eckes would make an attempt to dive to the bottom of Smith into to Turn 3 but got in Smith’s wake and washed up the track. Smith would cross the stripe 0.318 seconds ahead of Eckes to claim his first-career Gander Trucks win.

Can you take us through the final restart?

“We started off okay. I got loose out of nowhere, did the same thing last year so I guess I’ll have to go back and figure out why that happened. Kind of put us behind the rest of the day. Got a couple good restarts there at the end, but we constantly fought track position and dirty air. Our truck was just horrible in dirty air. Finally got a shot there at the end. I guess he (Zane Smith) just had a better run than I did and I went too high. He just drove around me like I was standing still. It’s three second-place finishes the last three weeks and frustrating as hell, but we’ll move onto Daytona.”

Is there some positivity coming back from the spin and getting the second-place finish?

“I’m sure there’s some positives to this and how we fought back, but I just can’t see them right now. We’ll just move on. Had an okay Safelite Tundra today and finished second.”

What has been the improvement for Kyle Busch Motorsports this season?

“We’re just bringing faster trucks and we’re unloading okay and I’m getting better. Probably just a combination of those three that have helped us out the most. Just super frustrated. We need to be a little bit better, but we’ll move onto Daytona.”

Eckes, the rookie of the year candidate, ranks fourth in the championship standings and after 11 events sits 49 tallies behind points leader Austin Hill. Eckes currently sits seventh on the 10-driver Gander Trucks playoff grid with Hill, Smith, Grant Enfinger, Matt Crafton and Sheldon Creed having picked up victories this season and being locked into the playoffs and Ben Rhodes sitting third in the points standings.

Eckes will be back behind the wheel of the No. 18 Safelite Tundra when the NASCAR Gander RV & Outdoors Truck Series resumes action on Sunday, August 16, 2020, at Daytona (Fla.) International Speedway Road Course. Live coverage will be on FS1, Motor Racing Network and SiriusXM at 12 p.m. ET.