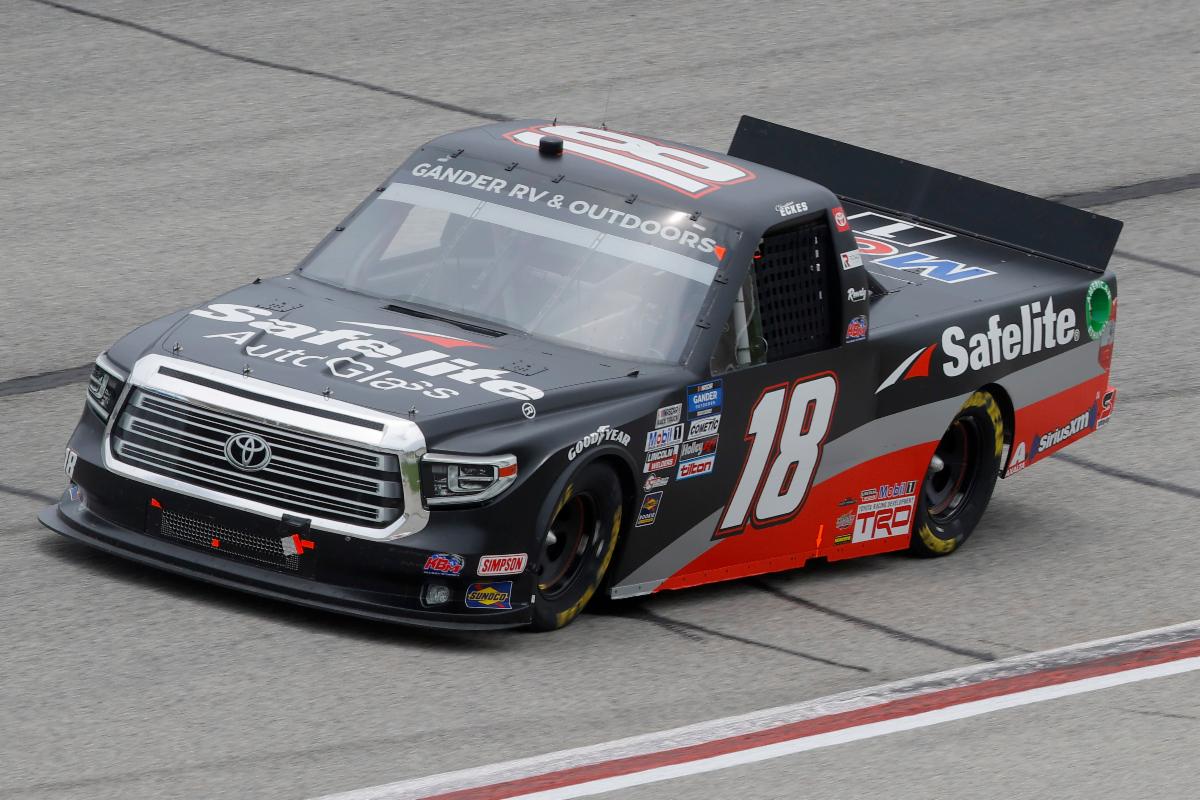 Winner: Grant Enfinger of Thorsport Racing (Ford) Christian Eckes, driver of the No. 18 Safelite AutoGlass Tundra, equaled a career-best third-place finish in Saturday’s Vet Tix Camping World 200 at Atlanta Motor Speedway, his first start in any series at the Georgia track. Eckes started form the pole and led twice for 18 laps early in the race but overshot his stall on the first pit stop of the day and had to make his way back through the field. Eckes was running eighth in the closing laps when Chase Elliott spun bringing out a caution. A speedy stop by the over-the-wall crew put the Sunoco Rookie of the Year Contender in the third position for NASCAR overtime, despite pulling to the bumper of the top two trucks he was unable to gain any spots over the final two circuits. The 19-year-old’s third-place finish was the third of his career. Last year, he finished third at both Las Vegas (Nev.) Motor Speedway in September and Homestead-Miami (Fla.) Speedway in November.

How important is getting this top-five finish after the struggles earlier this season?

“Our Safelite Tundra was really fast on short runs. I felt like we could run with the best of them for about three or four laps and then for whatever reason we just weren’t good past that. Finally, this is a result we can build on – the 22nd, 23rd and 14th place finishes to start the year definitely hurt, but we finally got it turned around a little bit and we can build on it. Hopefully be two spots better at Homestead.”

What does it mean to have a run like this after struggling early in the season?

“It’s huge. We kind of had a ‘coming to Jesus’ moment in the conference room this past week just trying to figure out what we could do better. I feel like we’ve done that and we can finally start trending some finishes together. It will be big for momentum and that’s definitely what this sport it all about. To finish third means a lot and it’s definitely a lot harder with a 40-car field now. Third would probably be fifth or sixth in a normal race. I’m really happy to finish here and just looking forward to the next race.

“How challenging are these races with no practice and no qualifying?

“It’s a lot of preparation. It’s actually a little bit better starting from the pole because you know exactly what you’ve got to do after watching film and stuff like that. You can just hold it wide open and see what happens. At Charlotte we really struggled, starting deep and not really knowing what traffic does at Charlotte or anything like that. Overall, it’s better this week starting from the pole and now we have a little momentum and more comfort back in the truck and it should be better for Homestead as well.”

Next Race:  Eckes will be back behind the wheel of the No. 18 Safelite Tundra when the NASCAR Gander RV & Outdoors Truck Series resumes action June 13 at Homestead-Miami (Fla.) Speedway. Live coverage of the race begins Saturday at 7:30 p.m. ET on FS1.