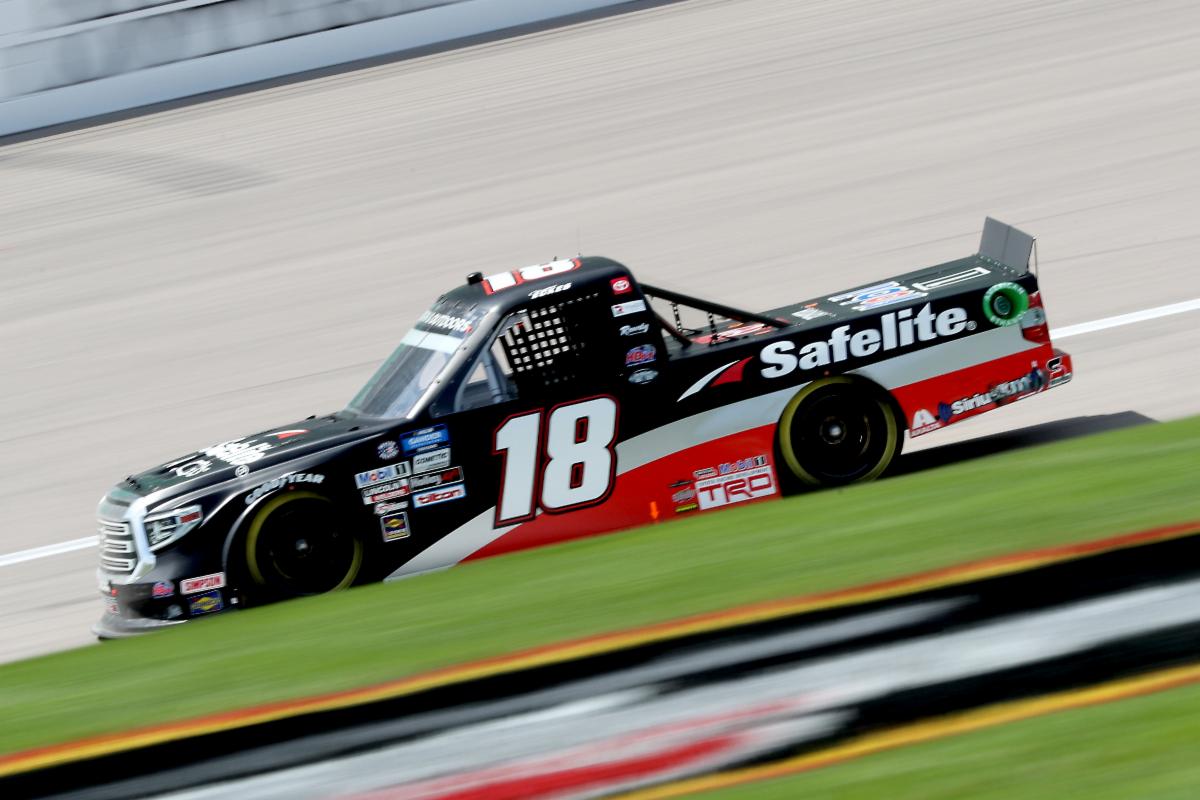 After finishing 13th in Friday’s night’s NASCAR Gander RV & Outdoors Series race at Kansas Speedway, the No. 18 team went to work overnight and brought a fast Safelite Tundra for Saturday’s second event of unprecedented back-to-back races at the same venue. Christian Eckes stalked two-time series champion Matt Crafton in the closing laps but in the end the rookie contender crossed the stripe 0.324 seconds behind the veteran.

For Eckes, it was his second runner-up finish across the last three events, equaling the career-best result he achieved at Texas Motor Speedway in Fort Worth on July 18 when he finished second to KBM owner-driver Kyle Busch.

What was the battle like with Matt Crafton in the closing laps?

“I thought I got a little tight, but I got a hole in the nose and just got tight behind him (Matt Crafton). Overall, just what a comeback for our Safelite Tundra team. We sucked yesterday. I can’t sugar coat it; we were terrible. Rudy (Fugle, crew chief) and the guys worked really, really hard last night and this morning to get it better. We still started the race a little bit off, but the truck came to us and was perfect at the end. I just got a little tight behind him. I was good in one corner and not the other. Just need to get back to the lab and get a little better I guess.”

Rudy said he wants you angry when you finish second, is that anger there today?

“Yeah, it’s not as much anger as last week. At the same time, it’s definitely a little disappointing. It’s hard to be disappointed after how we ran yesterday. Just ready for Michigan.”

How redeeming is it to have a performance like this after yesterday?

“I won’t sugar coat it; we were absolutely terrible yesterday. 13th is not representative of how good this team is or how good I am. We talked a lot about it last night. Rudy (Fugle, crew chief) made some really good changes. We started okay today. We weren’t perfect yet and that last run, actually after that pit stop, we got pretty good. I just got a little bit tight, which was the opposite of what we were fighting all day. Definitely feels good. Obviously, I wish we could have won there and I have a little bit of work to do to get through traffic. Struggled with the same thing last week. Have a little work to do, but at the same time, really proud of my team to rebound the way we did.”

Is there anything you learned or would do differently after chasing Matt Crafton in the closing laps?

“Just trying to find air. We had a hole in the nose and that didn’t really help the aero situation, but at the same time, just have to figure out how to get around him. When they go to aero-block me and take away my lane, I just have to rip the top or do something different. Got close a few times and even had a shot there coming to the checkers, but just needed a couple more feet.”

Do you feel your team is improving at the right time to get ready for the Playoffs?

“Yeah, absolutely. The first three races back were circumstantial. Charlotte we were just bad, we were about as bad as last night. The first two races we ran good, but we wrecked. I feel like we’ve had the speed, we’ve had the promise to show results, we just haven’t been following through. The last seven races, we’ve been able to minimize mistakes and have done a good job to get in good position and get points.”

How has your relationship with Rudy Fugle evolved through some of this adversity?

Eckes, the rookie of the year candidate, ranks third in the championship standings and after 10 events sits 50 tallies behind points leader Austin Hill. Eckes currently sits fifth on the 10-driver Gander Trucks playoff grid with regulars Grant Enfinger and Sheldon Creed having picked up victories this season and being locked into the playoffs.

Eckes will be back behind the wheel of the No. 18 Safelite Tundra when the NASCAR Gander RV & Outdoors Truck Series resumes action on Friday, Aug. 7, 2020, at Michigan International Speedway. Live coverage will be on FS1, Motor Racing Network and SiriusXM at 6 p.m. ET.