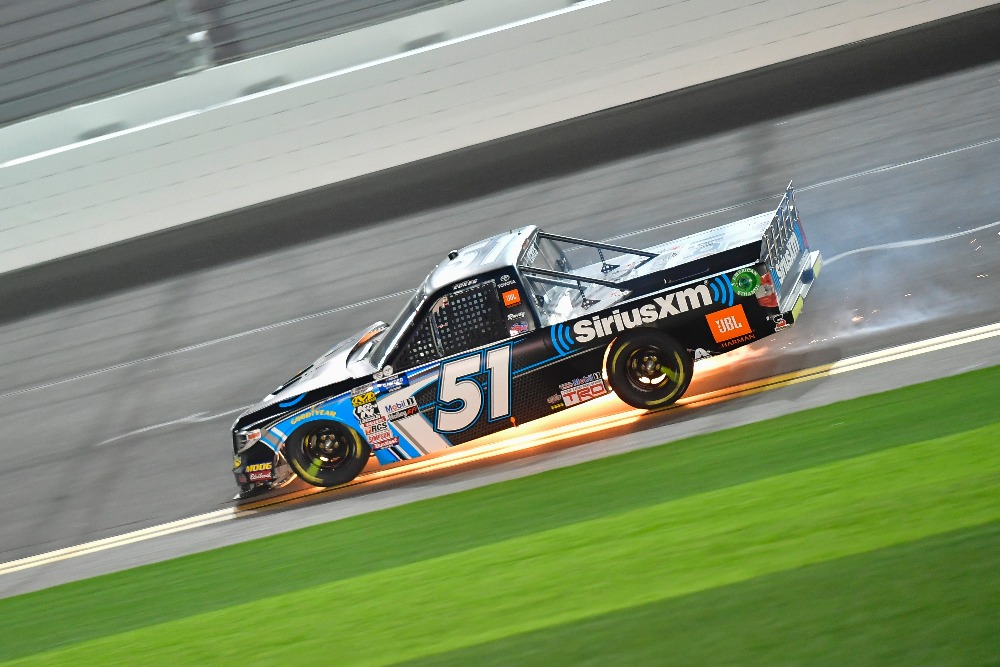 Christian Eckes made his first NASCAR Gander Outdoors Truck Series start at Daytona, earning the pole position in the No. 51 SiriusXM Toyota Tundra and running within the top-10 for much of the event before being collected in a wreck in the final stage. Crew chief Rudy Fugle and the 51 team made a valiant attempt to repair the damage, but after restarting the race, the 51 was unable to continue. Only nine trucks finished the NextEra Energy 250. This was Eckes’ first pole in five starts in the NGOTS with a lap of 49.287 seconds, 182.604 mph.

CHRISTIAN ECKES, driver of the No. 51 SiriusXM Tundra for Kyle Busch Motorsports:

What happened that took you out of the race?

“We fell back there on that pit stop, I think we had a gas can stick or something. We were on our way back to the front and I’m not sure what happened, but then we caught on fire a few laps after that. Disappointing end to the day, but I’m really proud of my SiriusXM guys, they brought me a really fast Toyota Tundra. We’ll have to move on to the next one.”

The No. 51 team leaves the first race of the season ranked 22nd in the Truck Series Owner’s Championship Standings, 25 points out of first.

Team owner Kyle Busch will be behind the wheel of the No. 51 Cessna Tundra when the Truck Series returns to action February 23 at Atlanta Motor Speedway in Hampton, Ga. Live coverage of the Atlanta 200 begins at 4:30 p.m. ET on FS1.