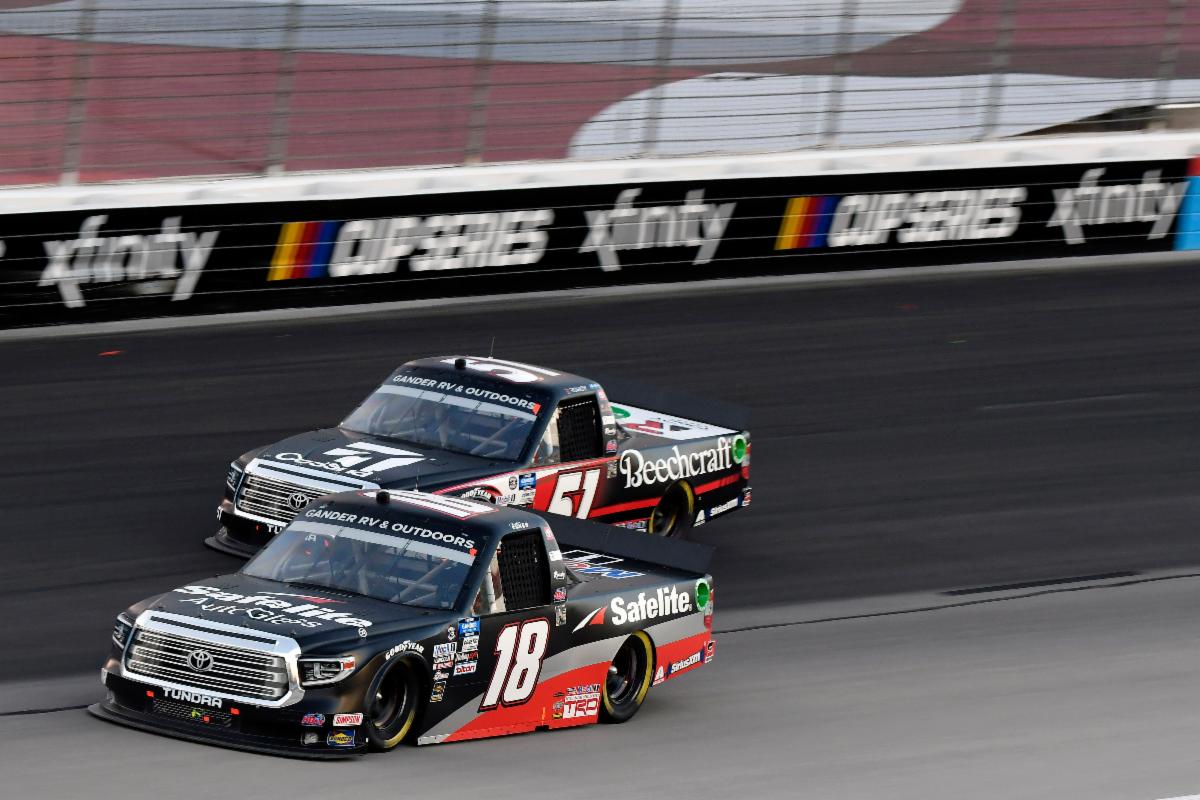 Christian Eckes gave it everything he had to try and come out on top in a late-race battle with his boss, Kyle Busch, in Saturday’s Vankor 350 at Texas Motor Speedway, but in the end came up 0.77 seconds short of pulling off the upset and picking up his first NASCAR Gander RV & Outdoors Series victory.

Eckes was 0.7 seconds ahead of his mentor when Busch entered pit road with 37 laps remaining. The following lap, Eckes made his pit stop, with both drivers getting four fresh tires and fuel, but Busch displayed his veteran skills entering and exiting the pits and when stops had cycled through on Lap 135 distanced himself nearly three seconds ahead of his pupil.

A two-truck accident slowed the field on Lap 154 and setup a battle for the win between mentor and pupil. Eckes would hang tough, racing side-by-side with the winnigest driver in series history for three laps and momentarily taking the lead with eight laps remaining, but Busch muscled his way back to the front and would cross the stripe 0.77 seconds ahead of his young driver.

The second-place result was a career-best for Eckes in Truck Series action, besting the three third-place finishes he had achieved across his first 19 starts.

What is it like battling with Kyle Busch and coming so close to the win?

“We had such a good truck and thought we were going to win the race there. I came off pit road there after green flag pit stops and he (Kyle Busch) was a straightaway ahead of us. Our pit crew didn’t do anything wrong; he just did a good job getting onto pit road, I guess. Hell of a run by the Safelite Autoglass Toyota Tundra and couldn’t be happier than that. We’re making strides, we’re right there and we’re where we need to be. We just need to put a full race together. This was a good run and my best career finish, so we’ll move onto Kansas, a place I’ve won at before and hopefully win there.”

Did you think you did everything you could on the final restart?

“I definitely gave it my best effort. Looking back on it, there’s probably a few things I could have done and maybe been a little more aggressive side-drafting. I tried to clear him, but he’s just so damn good at the aero game and I’m not yet. Got a little learning to do for Kansas, but overall proud of this team and how we all ran today.”

Do you have to race Kyle Busch differently knowing he’s your boss?

Eckes, the rookie of the year candidate, remained fourth in the championship standings and after eight events sits 33 tallies behind points leader Austin Hill. Eckes currently sits fifth on the 10-driver Gander Trucks playoff grid with regulars Grant Enfinger and Sheldon Creed having picked up victories this season and being locked into the playoffs.