Dylan Lupton to Drive No. 51 Safelite AutoGlass® Tundra at Darlington 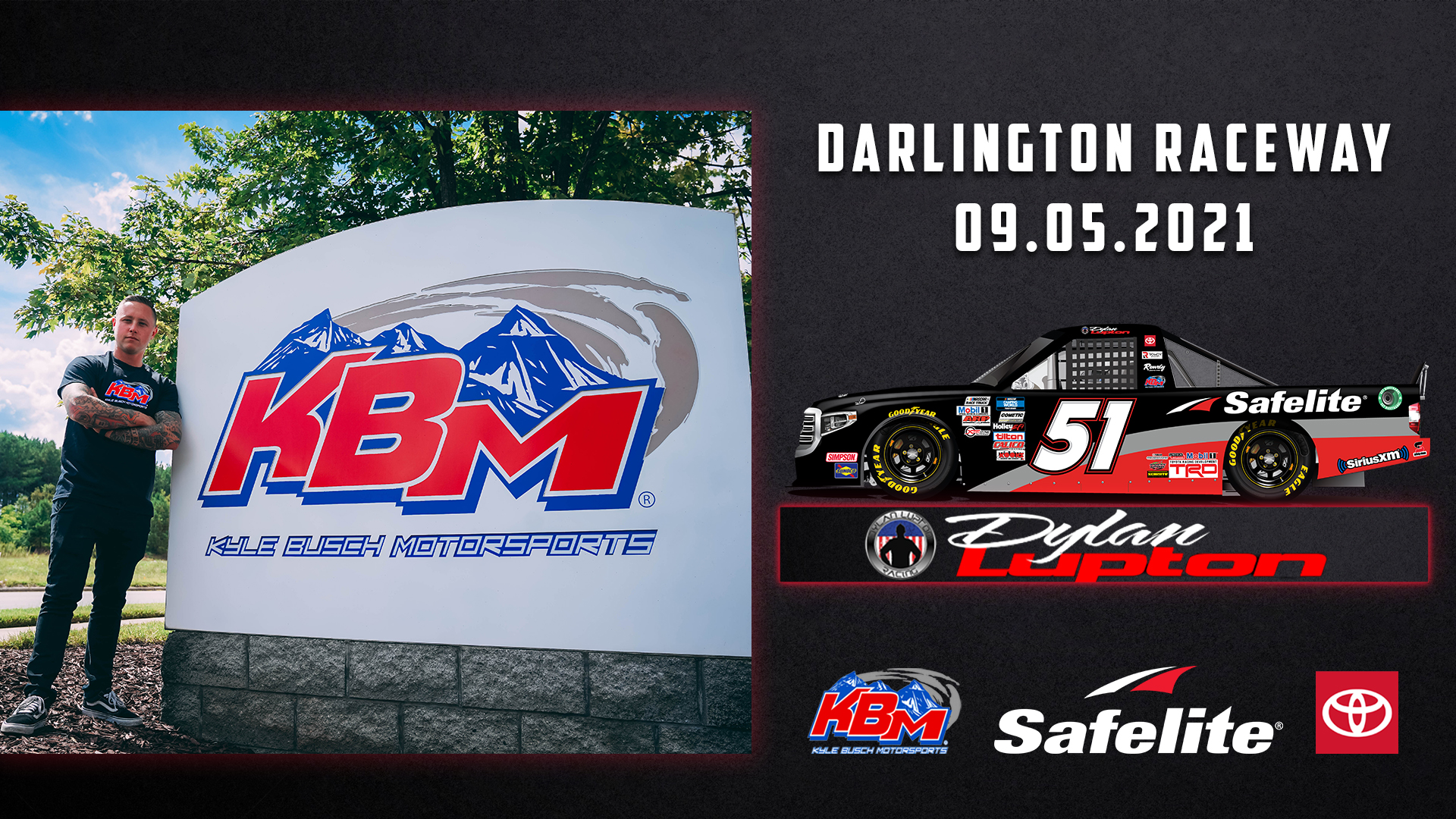 Lupton has recorded one top-five and four top-10 finishes across 11 career NASCAR Camping World Truck Series starts. Lupton posted a career-best fifth-place finish in the Truck Series race at Kentucky Speedway in Sparta in 2019. Additionally, he has made four NASCAR Cup Series starts and 35 starts in the NASCAR Xfinity Series.

“The opportunity to drive the top-notch equipment that Kyle Busch Motorsports prepares is a dream come true,” Lupton said. “The No. 51 team always prepares fast Tundras and I’m extremely excited to get to Darlington and be able to showcase my talent.”

First-year crew chief Mardy Lindley has led the No. 51 team to three wins across 16 races this season. Owner-driver Kyle Busch was victorious at Atlanta (Ga.) Motor Speedway and Kansas Speedway in Kansas City while Martin Truex Jr. won the inaugural Truck Series event at the Bristol (Tenn.) Motor Speedway Dirt Track. Truex Jr. became the 16th different driver to win a Truck Series event for KBM and the 12th to collect their first-ever victory in NASCAR’s third division. When he gets behind the wheel at Darlington, Lupton will be the eighth different driver to make a start for the No. 51 team in 2021.

With more than 7,900 MobileGlassShops™ and stores in all 50 states, Safelite AutoGlass® is the nation’s largest provider of vehicle glass repair, replacement and recalibration services. Last year, close to 7 million customers chose Safelite AutoGlass for its 24/7 national contact centers, advanced online scheduling, superior repair and replacement systems, and the industry’s only nationwide lifetime guarantee.

Safelite AutoGlass is a member of the Safelite® Group family of brands, which together make a difference in the lives of nearly 11 million customers annually. This leading service organization, founded in 1947, is reaching record growth thanks to its People Powered, Customer Driven strategy. The Columbus, Ohio-based company employs nearly 16,000 people across the United States.

Since debuting in 2010, Kyle Busch Motorsports (KBM) has quickly established itself as one of the most successful teams in all of NASCAR. Owned by two-time Cup Series champion Kyle Busch and fueled by his passion for winning, the organization holds the Camping World Truck Series records for most career wins (88) and most wins in a single season (14 in 2014). In addition to collecting a series-record seven Owner’s Championships, the organization has produced two championship-winning drivers: Erik Jones (2015) and Christopher Bell (2017).