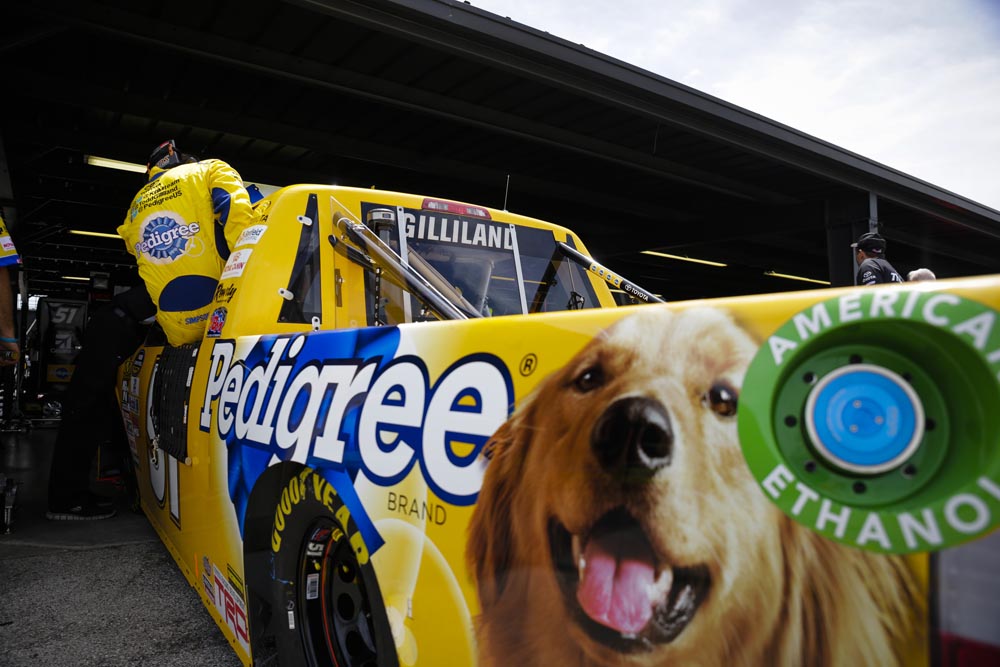 • David Gilliland, driver of the No. 4 PEDIGREE® Toyota Tundra for Kyle Busch Motorsports (KBM), will make his second career start in NASCAR Camping World Truck Series (NCWTS) competition at Daytona. He finished sixth in the 2015 event driving for Ricky Benton. Overall, Daytona will be Gilliland’s 11th start in the NCWTS with three top-10 finishes.

• Gilliland will be helping keep the seat of the No. 4 Tundra warm for his son, Todd, who will compete full time and contend for Sunoco Rookie of the Year once he turns 18 in May. Todd will miss four races early in the season before his 18th birthday on May 15, but has some pretty talented drivers filling in for him, including his father at Daytona, driver-owner Kyle Busch (Atlanta and Kansas) and Spencer Davis (Las Vegas).

• In addition to his NCWTS driving duties, Gilliland also secured a spot in the Daytona 500 through his qualifying efforts last weekend. He posted the 36th fastest time in Sunday’s qualifying and will start 19th in Dual 2 on Thursday night. He knows a thing, or two, about going fast at Daytona as he led the field to green at the 2007 Daytona 500 and the July event in 2014.

• PEDIGREE® has returned to sponsor David and Todd Gilliland in 2018. David will have two races with the PEDIGREE® brand, Daytona and Talladega (Ala.) Superspeedway, Oct.13, while Todd will take the wheel at Dover (Del.) International Speedway, May 4, Charlotte (N.C.) Motor Speedway, May 18, Talladega (Ala.) Superspeedway and ISM Raceway (formerly Phoenix Raceway), Nov. 9. BANFIELD® Pet Hospital will also sponsor the rookie of the year contender at Gateway Motorsports Park in Madison, Ill., June 23 and Bristol (Tenn.) Motor Speedway, Aug. 15. PEDIGREE® also sponsored the elder Gilliland in the MENCS in 2006.

What is your strategy to be there at the end to win at Daytona?

“Daytona is such a unique race track. It takes a lot of patience and self-discipline to take care of your truck. Obviously not all of the trucks are going to finish the race and you don’t want to be one of those. You have to be there with the fenders on it, up toward the front and put yourself in position to be there at the end and go for the win.”

In addition to the truck race, you are also going to be in a Cup car for the Daytona 500. How difficult is it to go back and forth between two vehicles with such different handling characteristics?

Being a veteran at Daytona, have you shared all of your drafting secrets with your young teammates Noah Gragson and Spencer Davis?

“As far as secrets go, I’ve talked to them a little bit. We had a meeting at KBM going over drafting and stuff. I’ve shared some, but I don’t think I’ve shared them all. I might need them for the end of the race. You’ve got to have something up on those young guys.”

KBM-040: The No. 4 Pedigree team will race KBM-040, for Friday’s NextEra Energy 250 at Daytona International Speedway. Noah Gragson ran this Tundra at both superspeedway races last season, with a best finish of 14th at Talladega (Ala.) Superspeedway.

• The No. 4 team (which was the No. 18 team with Noah Gragson last year) ended the 2017 season with one win, four top-five, 13 top-10 finishes and three poles. They were ranked 10th in the driver championship standings.
• KBM holds the NCWTS records for most career wins (65) and most wins in a single season (14 in 2014). In addition to collecting a series-record six Owner’s Championships, the organization has produced two championship-winning drivers; Erik Jones (2015) and Christopher Bell (2017).
• KBM drivers have collected one win, 48 laps led, four top-five and seven top-10 finishes resulting in an average finish of 16.6 across 19 starts at Daytona
• Owner-driver Kyle Busch picked up the team’s lone victory at the 2.5-mile tri-oval in dramatic fashion in the 2014 season opener, finishing .016 seconds ahead of fellow Toyota competitor Timothy Peters